TOPICS: Constitution/Conservatism; Front Page News; News/Current Events; Politics/Elections; US: District of Columbia; US: Mississippi
KEYWORDS: resignsleaderpost; trentlott
Thank you Senator Lott for doing the right thing for your country and for your party! 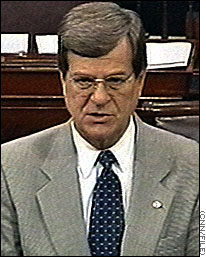 WASHINGTON — Mississippi Republican Trent Lott is stepping down as incoming Senate majority leader, but will continue to serve his country as a senator, he announced Friday.

"In the interest of pursuing the best possible agenda for the future of our country, I will not seek to remain as majority leader of the United States Senate for the 108th Congress effective Jan. 6, 2003," Lott said in a written statement. "To all those who offered me their friendship, support and prayers, I will be eternally grateful. I will continue to serve the people of Mississippi in the United States Senate."

Please let me know if you want ON or OFF my General Interest ping list!. . .don't be shy.

2. Let's not forget his violation of his oath to uphold the Constitution by signing the CFR!

3. The agenda that has given us the mis-named obscenity called the p.a.t.r.i.o.t. act and, of course, the "homeland" (is anyone besides me offended by that term?)
security law? Once again, a violation of his oath!

4. The aganda that calls for giving amnesty and citizenship to 3,000,000 illegals?

5. The agenda that hired Adm. Poindexter (a convicted liar)
to oversee a database on all Americans even to what they buy and where they buy it?

6. An aganda that declares an Axis of Evil, then picks and chooses who to go after, rather than all of them?

7. An agenda that wines and dines muslims at the White House, a group who refuses to condemn murdering civilians, but, gives a strong reprimand to a dumb statement by one of his own party?

9. The agenda that embraced the democrat's position of placing 50,000+ new employees on the the gov't payroll (read, our backs)?

Is this the agenda you want us to "get on" with?

You are either a man or woman of principle or you are not!

This is Trent Lott's smartest political move in years. He's recognized where he is needed, and where new blood is called for. Kudos to him.

8 posted on 12/20/2002 9:53:51 AM PST by Sabertooth
[ Post Reply | Private Reply | To 1 | View Replies]
To: MeeknMing
This is very good news. Lott stepping down but remaining in the Senate was the best case scenerio, from my perspective. I was worried there for awhile that he would resign his Senate position, and then we would've had to deal with Dasch-hole all over again. In my eyes, Lott has greatly redeemed himself with this move, for the good of the country and the party.
9 posted on 12/20/2002 9:59:02 AM PST by bdeaner
[ Post Reply | Private Reply | To 1 | View Replies]
To: Sabertooth
Congratulations to Sen. Lott for doing the decent thing and making the right move for once. It will strengthen and heal our party, allow us to forward with our conservative agenda, and make America better. We wish Sen. Lott the best and hope he continues to work with his GOP colleagues to make the changes the GOP victory on November 5th promised this nation a reality. Its time now to move on to focus on the challenges of the future.
10 posted on 12/20/2002 9:59:40 AM PST by goldstategop
[ Post Reply | Private Reply | To 8 | View Replies]
To: Sabertooth
Thanks, Saber. I agree.

I fully expected him to stay on as Senator the whole time when this time came. 1. The appointment of more conservative judges
2. Rendering permanent the recent tax cuts
3. Repealing the estate tax
4. Removing Saddam Hussein from power
NOTE: You seem to want to attack the entire Axis of Evil at once. Really?
5. Moving forward on Social Security reform and/or abolishment
6. Advocating against racial preferences in admissions and hiring