Bio-weapons lab in Venezuela for Saddam and Castro

Remember a brief mention in the media recently about accusations that Castro had a bio-weapon lab in Cuba? Well, don't bother looking for it there anymore. It was airlifted out by a Chavez C-130 in a rush/hush mission shortly after the news story broke. It's in Venezuela now, in San Antonio Los Altos near Caracas. It is still largely crated and being watched, awaiting final destination along with Cuban technicians that came with it.

The Chavez-Castro axis is preparing a Caribbean Terror: biological weapons.

In May 2002 Fidel Castro personally went to Iran, which the U.S. labels as the world's most active supporter of terrorism. He was received by that country's leader, Ayatollah Ali Khamenei, who declared that "U.S. grandeur can be broken," and that if it is, "it will be a service rendered to mankind and even the American people." Not to be outdone, Castro told the Iranians, according to the Associated Press, that the U.S. is an "imperialist king" that "will finally fall, just as your king was overthrown."

In July, Castro then sent his close confidant Rodrigo Alvarez Cambras - a congressman and the head of the Cuban-Iraqi Friendship Society - to Iraq as an envoy. This was after Venezuelan strongman Hugo Chavez had already been to Iraq himself, to pave the way for a Latin American Castro-Chavez pact with Saddam Hussein. As BBC reports from Iraqi TV and Iraq Radio in Baghdad, Alvarez Cambras met with Saddam Hussein to convey a "verbal message" on behalf of Castro and also with Deputy Prime Minister Tariq Aziz. The message was that Castro and Chavez wanted to work with Saddam on developing new bioweapons for use against the United States.

U.S. intelligence already have proof. Carl Ford Jr. is assistant secretary for intelligence and research at the State Department. He deals regularly with the CIA and other U.S. intelligence bodies. On June 5 2002, Ford told a subcommittee of the Senate Foreign Relations Committee that "Cuba has provided dual-use technology to rogue states. Such technology could support bioweapons programs in those states." Ford also said "We feel very confident about saying that they're working and have been working on an effort that would give them a BW--limited BW offensive capability. And that's serious enough to tell you about it."

Cuba already possesses very sophisticated recombinant technology, which Hugo Chavez discussed eagerly in personal visits with Chavez. Airforce Major Juan Diaz Castillo, the private pilot of Venezuela's Presidential Airbus, has flown Chavez to Cuba on more than a dozen such visits. Today, he is one of the resisters in permanent civil disobedience in Plaza Altamira, Caracas. Says Diaz Castillo: " - With Castro, Chavez always discussed U.S. world dominance and how it could be contained. Of the solutions discussed, the most recurring centered on biological weapons."

There are clear West Nile virus links between Saddam, Chavez and Castro. To the trio's delight, Saddam's remake of the West Nile Virus causes a 97% fatality rate. And now, with the Cuba-lab safely hidden with Hugo Chavez, even more is at stake.

Given the military liaisons between Cuba and Chavez, the biological warfare aspects of their mutual exchanges, their connections with Khaddafi and Saddam Hussein, and their connections to FARC, the outcome is chilling. Consider, as one Chavez insider has already done, how easily one could introduce a bioweapon to the US by contaminating cocaine.

Just thinking about these implications made Major Juan Diaz Castillo walk out and join Venezuela's opposition in calling for free and democratic elections to remove Chavez from power. " - If Chavez stays, it will not just be dangerous for Venezuela," says Major Diaz Castillo. "It will be dangerous for the whole world."

I had personally interviewed Major Castillo extensively, amongst other Venezuela officers, about this and numerous other topics when down there at the Altamira Plaza in Caracas earlier this month. These military men, IMO, are acting out of the highest integrity and concern for the fate of their country and need to be heard. These 30 Generals and other high-ranking officers know what's really going on there in Chavez's regime with most of them having left him in only the last 60 days. They also have over 18,000 other troops still within Chavez's military who are daily feeding them additional intel while awaiting their orders. See all these brave officers, risking their lives, who are together publicly and daily condemning the Chavez regime here. Click the link "Resisters" in the upper left corner for their photos and comments.

Mark, this if for your info. I know some Freepers thought that you might be a little overboard with comments you recently made about the introduction of a bio weapon to America via cocaine. Well, it looks like as usual you were on target before a lot of people.

Chavez definitely has to go.

To: shanec
Looks like we'll be finding WMD where the oil is. Humm.

Actually, hard to say now, it's likely Chavez who is financing and/or facilitating today some of what we are going after Iraq and other terrorists for doing. And the US govt, I'm afraid, is shy about upsetting their oil imports from Ven on the eve of Iraq invasion and possible ME oil interruptions to make that connection public and say so, loud & clear!

Chavez, and his unbridled praise for, active alliances and support for/with, and openly proclaimed desire to have Venezuela become like; Cuba, Iraq, Libya, and China does not equate to a sustainable future supporter of U.S. interests or oil, not by a long-shot. But, very dangerously, just the opposite!

This is not empty rhetoric from Chavez to be ignored, but even as others have reported that he: "...has Cuban and Colombian paramilitary forces at his disposal." Where do you think they came from? And, should we be surprised to also discover that China is sufficiently comfortable with Chavez to have made more 'investments' in Venezuela than in all of the rest of South America, including Mexico, combined!

Chavez, according to the top military that have recently left him, is an active supporter of the FARC/ELN Columbian revolutionists, that US is currently fighting, and they are supported materially in exchange for lucrative drug trade that's transported via official health dept vehicles here across Venezuela with Puerto Rico as the foreign destination.

And, Chavez donated 1 million $'s to Al Queda in Afganistan shortly after 9/11. He also publicly excused his Chavista supporters burning USA flags then by saying USA brought 9/11 upon itself.

If U.S. supports Chavez by their silence, for illusion of stable oil in the short term, this administration will eventually be seen to have facilitated and allowed another, much more dangerous, Cuba in this hemisphere!

The millions of brave Venezuelans, along with his top military that have deserted him, and are now in the streets protesting Chavez's cubanization of their beloved country know it all too clearly, they've been having to live through it...

Variations of that same "NO CUBA HERE!" sentiment is on a lot of those banners being carried down there right now... 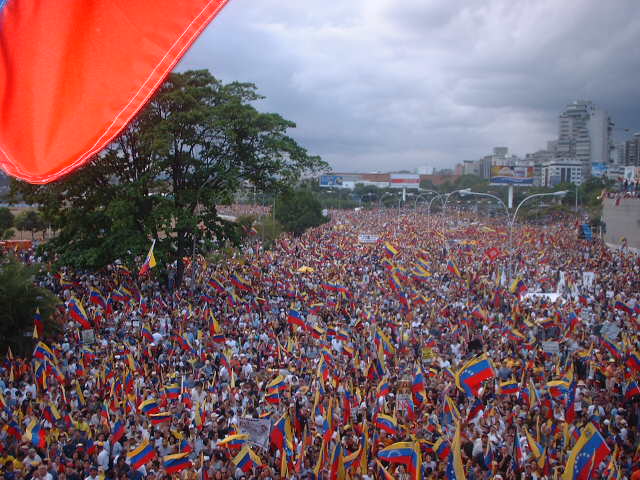 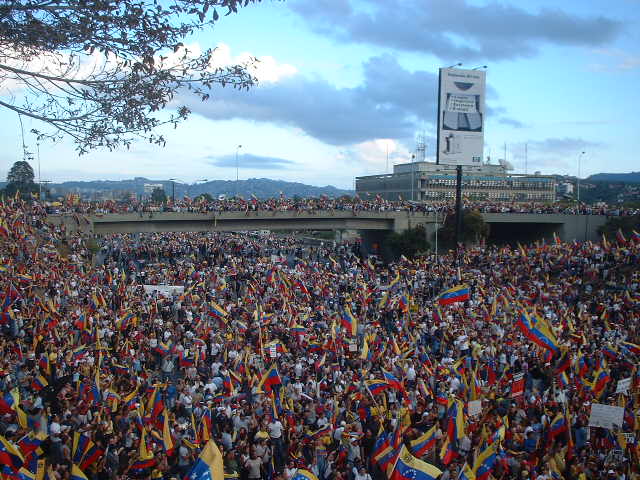 We all here in the U.S.A. better get up-to-speed on this historic fight for freedom in Venezuela that'll surely impact us here, and quick, too!

Attitude-wise, we could hope here in the USA for no better allies than the Venezuelan people. According to the just published 2002 Global Attitudes Survey by the Pew Research Center in Washington; 82% have a favorable opinion of the USA, and that is amongst the highest ratings of all the 44 countries surveyed. And, in regard to supporting the US led war on terrorism, 79% favor it while only 20% oppose it!

Clearly, no country in South America holds more promise for being a strong and effective ally and supporter of the USA, perhaps none better in this entire Hemisphere, *when* Chavez is gone and remnants of his regime are fully rooted out. Also, though, there is no current government in this hemisphere that is a more "Clear & Present Danger" to the USA with the continuation and expansion of Hugo Chavez type initiatives. Unchecked, Chavez will be able to do throughout this hemisphere what Fidel and Saddam have only dreamed/wished they could do!

Depends on how much of his oil we can grab.

Sounds like some of the best allies we have in the world and this hemisphere are the Venezuelians.

This alone should be the end of Chavez: Chavez donated 1 million $'s to Al Queda in Afganistan shortly after 9/11. He also publicly excused his Chavista supporters burning USA flags then by saying USA brought 9/11 upon itself.

Chavez donated 1 million $'s to Al Queda in Afganistan shortly after 9/11. He also publicly excused his Chavista supporters burning USA flags then by saying USA brought 9/11 upon itself.

Then if he and his commy friends, including Tio Fidel are involved in bio terror stuff, they should be taken out.

To: shanec
I find it unlikely that Castro or Chavez would make a move to acquire WMD, although it is possible. Anything is possible. It is a rare tyrant who would go so far as to put his people and country at risk of total destruction, although examples certainly exist: Saddam, Hitler being the most outrageous. Chavez and Castro don't seem the type; just being a tyrant wouldn't in itself be sufficient.

Another thing, though, the Communists seem linked to Alqaida. So Chavez support to Alqaida seems possible. It is an attempted power grab by the have-nots. Same old story. The link between Alqaida and WMD seems speculative, and there is a lot of speculation.