Please stop in and pay tribute to those who died at Pearl Harbor.
Post your graphics, prayers, stories, music, links etc.

Will you take some time today to let our military lurkers know they are not forgotten? 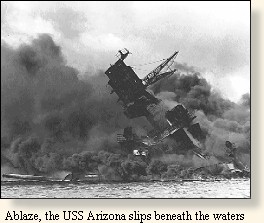 The battleships moored along "Battleship Row" are the primary target of the attack's first wave.Ten minutes after the beginning of the attack, a bomb crashes through the Arizona's two armored decks igniting its magazine. The explosion rips the ship's sides open like a tin can starting a fire that engulfs the entire ship. Within minutes she sinks to the bottom taking 1,300 lives with her. The sunken ship remains as a memorial to those who sacrificed their lives during the attack.

USS Arizona was built at the New York Navy Yard, Brooklyn, New York, was commissioned in October 1916. After shakedown off the east coast and in the Caribbean, she operated out of Norfolk, Virginia, until November 1918, when she made a brief cruise to France. She made a second cruise to European waters in April-June 1919, proceeding as far east as Turkey. During much of 1920-21, the battleship was in the western Atlantic and Caribbean areas, but paid two visits to Peru in 1921 in her first excursions into the Pacific. From August 1921 until 1929, Arizona was based in Southern California, making occasional cruises to the Caribbean or Hawaii during major U.S. Fleet exercises.

In 1929-31, Arizona was modernized at the Norfolk Navy Yard, Portsmouth, Virginia, emerging with a radically altered appearance and major improvements to her armament and protection. In March 1931, she transported President Herbert Hoover and his party to Puerto Rico and the Virgin Islands. In August of that year, Arizona returned to the Pacific, continuing her operations with the Battle Fleet during the next decade. From 1940, she, and the other Pacific Fleet battleships, were based at Pearl Harbor on the orders of President Franklin D. Roosevelt.

Arizona was moored in Pearl Harbor's "Battleship Row" on the morning of 7 December 1941, when Japanese carrier aircraft attacked. She was hit by several bombs, one of which penetrated her forecastle and detonated her forward ammunition magazines. The resulting massive explosion totally wrecked the ship's forward hull, collapsing her forward superstructure and causing her to sink, with the loss of over 1100 of her crewmen. In the following months, much of her armament and topside structure was removed, with the two after triple 14" gun turrets being transferred to the Army for emplacement as coast defense batteries on Oahu.

The wrecked battleship's hull remained where she sank, a tomb for many of those lost with her. In 1950, she began to be used as a site for memorial ceremonies, and, in the early 1960s a handsome memorial structure was constructed over her midships hull. This USS Arizona Memorial, operated by the National Park Service, is a permanent shrine to those Americans who lost their lives in the attack on Pearl Harbor and in the great Pacific War that began there.

It is amazing how this poster applies ad of 9/11 to present. It should be in every American's home and broadcast as a PSA at least once an hour.

God bless our troops around the world, the veterans, our allies, and the military families who sacrifice so much for our freedom.

Today we will be saying a special prayer for those who gave the ultimate sacrifice -- on this day of infamy and all the fallen who paid for our freedom with their blood.

With this prayer we show our respect and gratitude.

Unfortunately a lot of people seem not to appreciate that harsh reality.

Feel free to e-mail me at  seaside611@hotmail.com with your ideas about what you would like to see in the Canteen.

As several others have said,

A reminder to Canteen Crew NOT to post any responses they get UNLESS the person asked them to.


On this morning 61 years ago, a group of Navy reservists from St. Paul fired the first American shots of World War II, sinking a Japanese two-man submarine trying to sneak into Pearl Harbor a little more than an hour before the attack.
Yes, the men on the USS Ward not only fired the shots. They sank the sub.
They've been saying that for 61 years, but not everyone believed the Ward actually sank the sub. There was no proof. No one could find the sub on the floor of the Pacific Ocean.
Even Robert Ballard, who found the Titanic in 1985 and John F. Kennedy's PT-109 earlier this year, couldn't find the sub.

Decades passed, and the men from the Ward got older and older. Most have died. Only about 20 of the 82 men are alive. About a half-dozen live in St. Paul.
A little more than three months ago, on Aug. 28, researchers from the Hawaii Undersea Research Laboratory sent two exploratory subs down 1,200 feet to look at an object that showed up on sonar. They hoped it was the missing Japanese submarine.
"All of a sudden it appeared out of the murky depths just sitting on the sand," said John Wiltshire, associate director of the University of Hawaii laboratory.
News accounts quickly flashed around the world, and the men from the Ward excitedly called one another.

Willett Lehner, who lives in Stevens Point, Wis., recalls getting a call from a former shipmate now living in Florida.
"They found it! They found it! See, we knew we sank it," Lehner recalled hearing over the phone.
Lehner, 82, never had any doubts. The Ward was patrolling the entrance to Pearl Harbor the morning of Dec. 7, 1941, when the destroyer's crew spotted the sub, one of five headed toward the harbor shortly before the attack by Japanese planes that left 2,390 people dead and 1,178 wounded.
The Japanese sub was at the surface when the Ward fired two shots, the first missing but the second striking the sub's conning tower. "I saw it when it got hit, and I saw it when it was going down, and I was sure we had sunk it," Lehner said.

After the war ended, the men from the reserve unit formed the First Shot Naval Vets club in St. Paul in 1947 and have met regularly over the years. They helped get the gun from the Ward brought to St. Paul in 1958, where it now sits on the state Capitol grounds next to the Veterans Service Building.
Every year, the men gather at the gun on Dec. 7, and they'll do so again at a ceremony this morning.
Proud of firing the first shots, the men also wanted credit for sinking the sub. They were delighted when it was found. The sub has shell damage in its conning tower and still has both of its torpedoes.
"We'd been telling them that for 60 years, and now they know it," said Orville Ethier of St. Paul, president of the First Shot Naval Vets.

Lehner traveled to Hawaii two years ago to help Ballard find the sub. Ballard searched for two weeks, and Lehner was on the ship every day.
"The thing is, he didn't want to take anyone else's advice," Lehner said of the legendary shipwreck finder. "I thought we were out too far. I kept telling him we need to move over toward the entrance to the channel. And he'd say, 'Oh, no, I know where it is.' "

Over the years, Lehner had encountered many doubters. "Yeah, yeah, yeah, you think you sunk it,'' Lehner said people would say. "I said, 'I know we sunk it.' "
It didn't help that Ballard couldn't find it. "I think Ballard thought that when he didn't find it that we didn't sink it," Lehner said.
Wiltshire said the Japanese sub is the most important modern marine archaeological treasure ever found in the Pacific Ocean and, overall, second only to the Titanic in the Atlantic Ocean.

The precise location of the sub has not been released, and there are no plans to raise it, Wiltshire said. The U.S. government has indicated it would like to have the site become a marine sanctuary.
"The federal government wants to protect it where it is," Wiltshire said.
Inside the sub are likely the first casualties of Pearl Harbor.
The Discovery Channel is working on a documentary about the sub and took Lehner down to look at it in October in one of the research laboratory subs.

"I think this is very, very significant for the crew of the Ward because this validates the very accurate information they transmitted to headquarters an hour before the attack began," Wiltshire said. "It's unfortunate that the Ward's report was not heeded.''
More than one hour before the 8 a.m. attack on Pearl Harbor, the commander of the Ward sent this message to headquarters in Honolulu:
"We have attacked, fired upon and dropped depth charges upon submarine operating in defensive sea area."
It was a warning that could have changed history.
"They were absolutely right," Wiltshire said. "They sounded the warning and no one listened."

Birthdates which occurred on December 07:


Deaths which occurred on December 07:


Holidays
Note: Some Holidays are only applicable on a given "day of the week"

Religious History
0374 Early Church Father, Ambrose, 34, was consecrated Bishop of Milan, Italy. His influential works on theology and ethics made Ambrose (along with Jerome, Augustine, and Gregory the Great) one of the "four doctors" of the Western (Latin) Church.
0430 At the Synod of Rome, Cyril of Alexandria, 54, formally condemned the doctrine of the Antiochene monk Nestorius, who had claimed that there were two separate Persons in the Incarnate Christ (one Divine, the other Human).
1661 Under pressure from the British Parliament, the American Colony of Massachusetts suspended its Corporal Punishment Act of 1656, which had imposed harsh penalties on Quakers and other religious Nonconformists.
1965 The Roman Catholic and Greek Orthodox churches formally reconciled themselves by reversing a mutual excommunication of each other, dating back (over 900 years!) to July 1054.
1973 In Atlanta, the Presbyterian Church in America formally instituted its missionary organization, PCA Mission to the World. It was an outgrowth of the newly established denomination.

A priest and pastor from the local parishes
are standing by the side of the road holding
up a sign that reads, "The End is Near! Turn
yourself around now before it's too late!"

They planned to hold up the sign to each
passing car.

"Leave us alone you religious nuts!" yelled
the first driver as he sped by.

From around the curve they heard screeching
tires and a big splash.