Former President Donald Trump is more popular with U.S. voters than President Joe Biden, according to a Rasmussen poll released on Friday.

However, former President Barrack Obama is more popular with voters than both Biden and Trump. Fifty-five percent of voters view Obama favorably, and only 26 percent have a very unfavorable opinion of him.

“Comparing voter opinions of Biden and his two predecessors across demographic categories, the current president suffers from more intense disapproval by Republicans, and doesn’t have the kind of strong support from black voters that benefitted Obama,” according to the poll report.

What does Dominion Voting Systems say? That’s the only one that is going to matter.

Look...Fellow Americans...both Democrat, Joe Biden and Democrat, Kamala Harris are illegally elected POTUS & VP...period!!! Truth of the matter is....Biden is a total failure as POTUS and Harris belongs in a ladies rest room where she can hand out hand towels and hand lotions!!!

If Biden goes down and Harris ever becomes POTUS you can kiss the USA Nation Republic goodbye forever!!! Ya all better start thinking of your children and American children yet to come!!! The handwriting is on the wall...Trump won the election...period!!! Biden got 81,000,000 votes..never...Did ya all see his CNN Town Hall... Very few folks showed up. Biden/Harris are toast...no...burnt toast!!!

Never assume your own opinion is shared by the country as a whole. We’re not the same country we used to be and we are changing rapidly. The county I’m in is now 40% born in a foreign country and their voting habits show why the democrats will be importing 2 million foreign voters this year. I hear little protest or outrage by Republicans - objections from time to time, but little true opposition.

What State are you in?

I live on West Coast which is so foreigner friendly, it’ll make you puke.

JoeBiden always seems to have just walked out of an opium den. Not as an observer though. More like a VIP who gets it for free every time he stops in to say hello.

Biden should have stayed safely tucked among the Delaware Dummies who voted for the smirking goon, but the greedy Biden Crime Family egged him on into a problem that threatens the highest reaches of the U.S. government.

It will finally dawn on most halfway intelligent people just how badly they were misled by Biden and how he hid his self-serving activities for so long.

A little bit of truth parceled out at a few key moments could easily have spared us the unpleasantness that awaits. 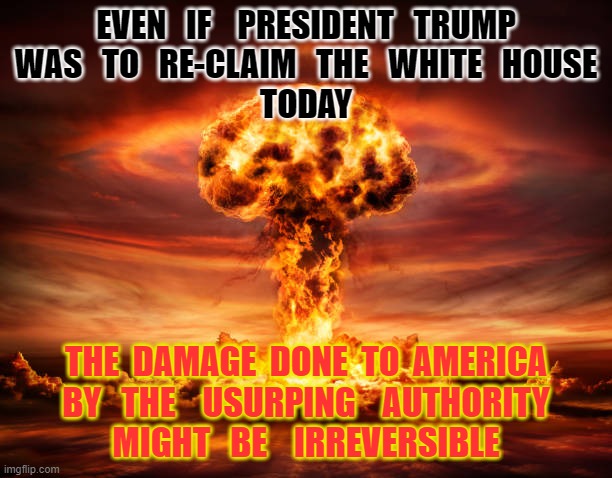 "Get together with the sheriff and publicly announce you will not violate second amendment rights to citizens and encourage them to go buy a gun. It'll take about ten minutes for the enemy to blow a gasket, but once the word is out, many citizens would be armed within the hour, and they will not forget the words that there was once a man in charge ..... and attempt to be qualified adults, themselves.

AMERICA NEEDS TO BE ENCOURAGED, NOT TAUGHT NOR REPRIMANDED."

That 52% that has the favorable view of Trump are all Nazis and fascists, dontcha know.

Just watch out for when Kamala names her veep.

They actually took a poll to arrive at that conclusion? Compare Slow Joe’s recent town hall attendance (100) to ANY Trump appearance (20,000+). That’s all they need to know.

There is no way that 51% of US citizen voters have a favourable opinion of Biden.

Did they poll the Dead people, who voted 100% for Biden?

This is from Rasmussen

the 0bama rating is just another example of white people being too cowardly to say what they really think.

Biden is out of touch with reality.

Is Kameltoe Harris dancing there? Or is the strip joint upper scale, so they wouldn't hire here? :-)

Good idea it’s about the only way to get some peoples mind to open up.

What do you mean by “Republicans”?

Remember, RINOs are the same as Democrats.

There is no way that “Barrack” Obama is more popular with real, legal, live voters than Trump. The Uniparty even needed to steal the election in 2012 because real voters wanted Obama out and anyone but Obama in, even a RINO like Romney.