As you’ll see, O’Rourke has no answer to this perfectly predictable question except to mumble something about weapons of war. But why should we focus on weapons of war, asks Columbine survivor Evan Todd, when they’re responsible for only a fraction of all gun violence? The Columbine massacre itself wasn’t carried out with assault rifles, he notes. Ed sent me a spreadsheet in which he ran through the FBI’s most recent statistics for murder by firearms and found 10,982 in total in 2017, of which exactly 403 were committed with rifles — a rate of 3.67 percent. There were many more murders committed by “unknown firearms” but even assuming (falsely) that every last one was committed with an assault rifle, that would still put the total of murders by rifle at just a third or so of all firearms murders.

I will keep repeating the same thing I guess. At least half of all shootings are drug and drug gang related. Some scum executed a 9 year old kid in Chicago the other day as revenge against the kid’s father, whom they believed killed one of their relatives. First if you can’t stop the drugs, you can’t stop the guns. Second, if you want to cut the shooting rate in half (and robbery and burglary rates and insurance rates) find a way to take the profit out of drugs. Then there is no need to kill rivals.

Most importantly, time to enforce the gun laws. People on parole and probation for violent felonies have agreed as terms of their release to surrender certain rights. They can be and should be stopped and searched frequently and if caught with a gun sent to prison. And it’s time that prosecutors stop dropping gun charges. Big city prosecutors drop gun charges frequently as part of “justice reform” and also for the costs because gun crimes against felons carries mandatory sentences. Mandatory sentences means more likely it goes to trial, and more costs to incarcerate. Well duh there is a reason why those laws are on the books. The big cities just have a catch and release program with violent felons. Insanity.

Incredible that Texas almost elected this lying POS to the Senate.

Goes to show the power of the Democrat controlled media in lying for their favorite candidates.

And if you take away firearms that will indeed be the new popular way to kill in mass. The situation now is nothing compared to what it could actually be.

‘Cuz there are little ol’ men and women who need them when confront by multiple armed teenagers or adults trying to rob him in their own homes?

O'Rourke is already there. He not only calls for confiscation of ARs and AKs but also firearms using “high-velocity, high impact” ammunition and any other firearm that's used on “the battlefield.”

Those afterthoughts should take care of handguns of the calibers 9mm, .38 and .45 calibers.

And rifles firing .30 caliber - not to mention those firing .50 caliber - they are gone too if Democrats get their way.

And don't forget, just in the past couple of weeks word has leaked out that a British soldier used a shotgun to kill four terrorists. Bye bye shotguns.

You'll still have .22 handguns to defend the second amendment. But only until someone remembers that .22 handguns are used by deadly assassins like Sirhan Sirhan.

Wait until they start killing people with air rifles. Air rifles are now legal for big game hunting in 16 states - I even saw a picture of a guy with a cape buffalo he killed with an air rifle. The article said you could fire several times without recharging. We’re talking .35 and .45 caliber bullets with at least 350 foot pounds of energy...

This “Columbine survivor” bullied the two shooters, just like the “Parkland survivors” bullied that shooter.

“If you ban semi-automatics that leaves revolvers, bolt and lever action rifles and shotguns.”

Yet, in 1934 there was an attempt to ban handguns as rifles were considered best for household protection.

Then they released Pat Purdy from a mental institution, allowed him to pass California’s waiting periods, then he shot up the Stockton school, killing himself.

The shelved bill was pulled out and passed before any opposition could be mounted against the bill.

Because such a foolhardy, unconstitutional law would touch off a civil war in which MILLIONS could potentially die. Because we, the American patriots, will kill all the traitors and tyrants you send to take them. The GRID could even be destroyed. You want to freeze in the dark? You idiots want that?

I believe you are correct

And still 100% EFFECTIVE in killing attackers, criminals, tyrants, traitors, and usurpers of the public trust. But I repeat myself.

52 posted on 09/20/2019 12:21:37 PM PDT by backwoods-engineer (Enjoy the decline of the American empire.)
[ Post Reply | Private Reply | To 27 | View Replies]
To: Ancesthntr; Travis McGee; central_va; Lurkinanloomin
You've got an excellent grasp of the situation, except for one possible flaw: I haven't yet seen you address the issue from the perspective of the left. And, as any good general knows, if you don't deconstruct the enemy's strategic plans and tactical goals, then you're left with only basic motivation and simplistic tools.

For example, we all know the prog's core motivation: yes, control, power & wealth. These goals were identified decades ago - many/most on the right are fully cognizant today, so the disinformation campaign no longer works (eg "for the children", ad nauseaum). Next, let's look at the current roster of blunt instrument tools: legal justification(s), constitutional foreclosure, and confiscation.

OK, so far so good, right? Patriots know what the enemy is doing, and they know details of the current set of tools, therefore are fully prepared to resist. And, as I noted on a previous thread, the left isn't stupid. They can no more leave their safe spaces and security citadels as patriots can mount a direct attack on DC. So, the existing stasis continues, with the each side relatively secure within their own respective spheres of influence.

Now, let's switch gears and think about this "problem" from the left's perspective. Much like the British developing the tank to break through defensive trenches, what long(er) term plan(s) do the proglibs have in store to break the stalemate?

Well, again the obvious answer is population substitution, as the old guard is replaced by newer, more passive, dumber and weaker illegals, along with other 3rd work immigrants who don't have any history of rebellion. If I was a leftist general, this is exactly what I would do - simply play out the waiting game that leads to a demographic tilt within a generation or two.

But what about top secret, black programs to accelerate the process? I'm one who believes genetics/nature is 90-95% of the game. The left has tried the cultural/nurture play for a century with no real progress. So, ask yourself this question: how to reduce those imbued with a genetic disposition towards independence and rebellion against authority? After all, unlike every other country in the world, the US stands alone as the one nation where everyone with a bone to pick from wherever they came from got up and left. And here we are: an aggressive, belligerent, violent, difficult to govern/manage nation.

Question: how do you break the people? Simple: all you have to do is "change" the people to a more peaceful, malleable state. And how do you do that: easy, genetic engineering. See where this is going? That's why an idiot like Beto could be taken out by his own side; what a dunce for spilling the beans. Rather, the top echelon players know full well that the way to defeat the American people and finally rule the world is to simply eliminate those pesky traits that keep interfering with management. Think of the TX ranchers who simply phased out recalcitrant longhorns for more passive Euro cattle.

Same principles of animal husbandry apply here as well: cull the malcontents and transition to overall population aka 'herd' to a group more easy governed. QED Think about it - once you get the big picture, it obsoletes all these tired, incremental battles of mere yards. Focus on the big picture of the ultimate goal, and how very smart and ambitious people attracted to power & control are game playing how to defeat the right once and for all.

“Do all of your relatives share conservative values, or has that eroded over time?”


My paternal grandfather despised the Soviets for what they had done to his family. My father felt the same way. I experienced less of the personal pain, but because I observed it, I studied the reasons why - and I’ve despised Leftists of all stripes for several decades. My mother is pretty conservative, but her parents weren’t (though they despised all of the governments in Europe - none of which were very decent to anyone, let alone Jews.


As for the rest of the family...well, my mother’s brothers (who are closer in age to me than their sister) started out as pretty liberal 1960s and early ‘70s college students. Then they started working...and now they are very conservative (especially for NY Jews). The rest of my mother’s family is lost beyond hope. 2 of my cousins were all over Facebook the day after the election in 2016, ready to kill themselves, moaning like someone had just ripped out their livers. Others are more quiet about it, but I know that they feel the same way. None of those people know much about the family’s history, nor do they care. On my father’s side, he only had one sister and none of her kids gives a damn about politics at all (and for sure they know very little, and care very little, about the family history). There is little to none of the wisdom in my generation that existed in the prior 2 that I knew.

Note that my kids are among the few and proud conservatives in their school. My daughter even wore a MAGA hat and a Trump t-shirt on the day after the election, BECAUSE it would piss people off. She did get high-5s from the entire football team, though. :>)

How about the ‘free’ universal Health care?

Because civil wars are ugly things, that’s why.

All roads lead to a civil war which will include the question “Where ya from, Bubba?”

The wrong answer is going to result in BANG.

It might not even require a verbal interrogatory. The conversation might be abbreviated, and take place at scope range.

This is what the globalists/communist are bringing us with their population replacement program. 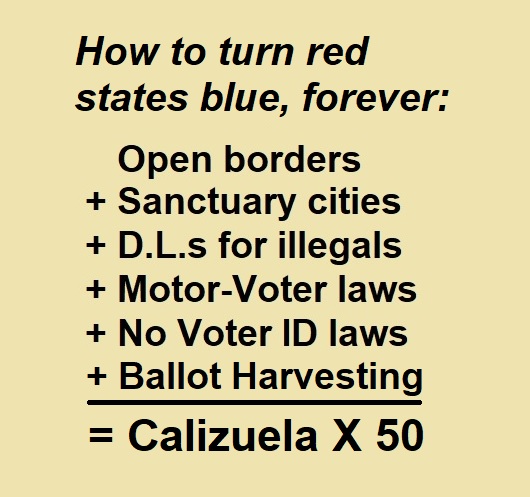 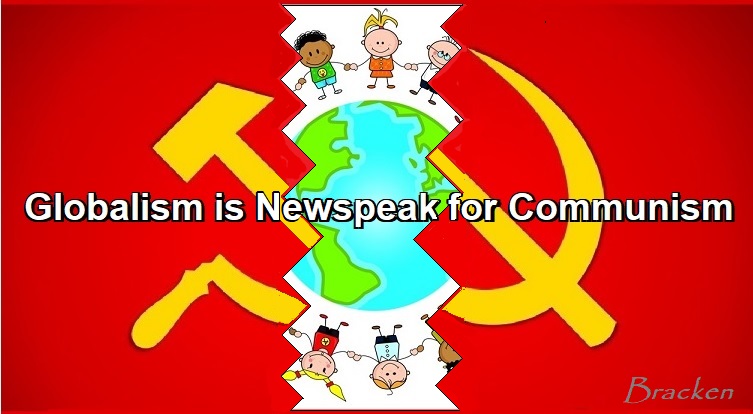 Mexico is importing drugs illegally with great success. If guns are restricted the Cartels will just import drugs and automatic weapons successfully. The Cartels are armed with modern weapons that many national armies carry and for a few dollars they’d gladly sell them and upgrade.