The Cowardice Of Mass Shooters And The Easy Prey They ALWAYS Target
Townhall.com ^ | August 4, 2019 | Kevin McCullough

There are many questions we are awaiting answers on.

For the friends and families of each of the 30 (or more) fatalities from Saturday’s shootings in Texas and Ohio, this weekend will be the beginning of a long cycle of days, weeks, months and years.

The major question everyone in America is searching for is, “Why?”

“Why did these two evil individuals seek to kill as many innocent humans as possible?”

From the beginning of time, from the very first homicide, humans have wrestled with that question.

Politicians that are not currently in power exploit this pain to begin calling for an undoing of Constitution(s) even before the victims have been identified.

Refusing to call culture to account, they campaign on casting the Constitution as inhumane.

Refusing to institute legal and common sense changes that reinforce the rights, and protections of our people with constitutional consistency they point to the tools of the killers as opposed to the killers’ conscience.

Politicians have to do this.

They can’t sound like schizophrenic crazies themselves, harping for people to stop pulling triggers, and on the other hand allow post-birth killing of children to remain legal.

That’s the advantage that you and I enjoy not being a Democratic candidate for president in 2020.

We can hold to a consistent and compassionate ethic that seeks to protect innocent victims—always!

One of the questions I’m awaiting an answer to in both the Texas and Ohio shooting is simple, “Did the shooters legally acquire the weapons they used?”

The reason I’d like to know is also simple. If they did acquire them illegally then the argument for more laws defining legal parameters around guns falls apart.

That the Sandy Hook killer stole the guns he used to massacre babies demonstrated that.

I mean their plan is always to commit mass homicide—which we can legally put them to death for—shop lifting a gun from somewhere doesn’t strike me as quite “scary” of a crime.

So if killers are dedicated to committing crimes in order to pull off their crimes, are there other elements a constitutional society can look to to protect her citizens?

This week the Democratic candidates will likely call for the passing of more laws (that, even if passed, criminals will ignore.) Those laws (if they stop short of complete confiscation) will do zero to have prevented either of this weekend’s shootings. If those laws include complete confiscation of 393,000,000 legally owned firearms amongst a population of 327,000,000 citizens... well... good luck with that.

When the Parkland, Florida shooting took place I penned a short column on seven simple steps that could be taken to immediately end school shootings.

In the aftermath of Parkland the Florida Assembly took up all seven in legislative proposals and adopted (I believe) six of them as final law.

They don’t all apply to a mall in El Paso or a bar in Dayton, but one incredibly important parallel does apply.

Simon Malls, the operators of the Cielo Vista Mall, the scene of the El Paso shooting, bans guns on their property even though Texans are allowed to open and carry concealed.

Similarly eateries that serve alcohol in Dayton, Ohio ban guns. They do so even though Ohio is similar to Texas offering both open and concealed carry options.

We may not know the answer to why the shooters chose to kill. But we know at least part of the reason they chose where to kill.

In gun free zones there is no one to return fire.

In the Texas shooting—if the “manifesto” is confirmed to be that of the shooter’s—it was fairly obvious that he had his doubts that he would survive. The fact that he did is a testament purely to the idea that the 3,000 people in the mall that day simply had no means to respond.

In Ohio, according to an eye-witness report, the gunman was disarmed and killed with his own firearm.

In both instances the killers did not choose to attack a military base, a police department, or a gun range.

Nope, their cowardice took them to places where killing victims was akin to shooting fish in a barrel.

As did the Gilroy, California, and Brooklyn, New York shooters the week before.

126 Americans have died thus far in 22 mass shooting homicides, defined as four or more deaths, not including the perpetrator, in 2019.

The pain of each loss is immeasurable.

The time for politicians to make us weaker through complete confiscation will never be allowed.

And if that’s true, it is a moral imperative that we make it more difficult for criminals to act on their darkest wishes. They are cowards. They see the innocent as targets.

And they believe they will not be stopped.

It’s time to help them change their beliefs.

Ban gun free zones. Many ignore those already, especially criminals. Why should the innocent comply?

So I know it’s early but any counts from chitcago or b’more for the weekend?

“Any event, building, store or eatery which forbids the lawful carrying of a firearm must provide on site armed security for the defense of those who enjoy the facilities.” There, fixed. 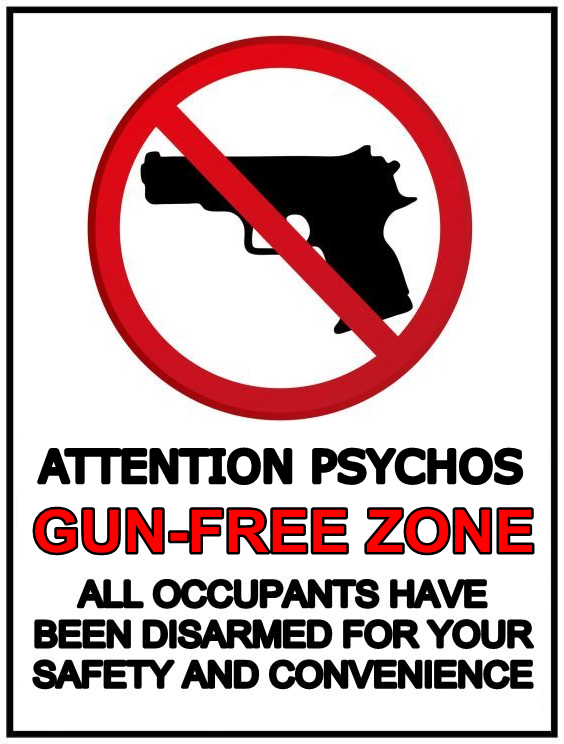 They aim at the unarmed.

Why is rhe doctor that released him not liable? Huh?

How could a doctor certify he was not a threat to himself or others? Huh? Jail the doctor!!!

I don’t think the Wal-Mart was a gun-free zone. How many of the dead were from there?

“Any event, building, store or eatery which forbids the lawful carrying of a firearm must provide on site armed security for the defense of those who enjoy the facilities.”

Totally agree with this. If any place tries (or does) deprive you of the RIGHT to defend your life and that of your family/friends who may be with you, then the responsibility is on them to be in a position to defend the lives of those they’ve deprived of basic defense against murderers. Can they/will they defend you when it comes down to brass tacks? Maybe, maybe not.

The individual’s right to self-defense is a logical part of the unalienable Right to Life. If you can’t defend it, you don’t have it.

Let the property owners(including governmental and quasi-governmental entities) choose to allow or prohibit the presence of legally possessed weapons. However, if they (and public entities, as well) choose to prohibit the right to defend ones self, they should be strictly liable for defending the occupants, and for damages to the individuals, their families, and estates arising out of the prohibition.

Blaming a gun for crime is like blaming Krispy Kreme for people being FAT!

Let the property owners(including governmental and quasi-governmental entities) choose to allow or prohibit the presence of legally possessed weapons. However, if they (and public entities, as well) choose to prohibit the right to defend ones self, they should be strictly liable for defending the occupants, and for damages to the individuals, their families, and estates arising out of the prohibition.

If I were a budding lawyer, I'd create a cottage industry of suing property owners who deny citizen's second amendment rights when somebody gets killed.

re: “The Cowardice Of Mass Shooters And The Easy Prey They ALWAYS Target”

Where was it I read that “Conspiracy theories are the favored tools of the weak-minded”?

I hope it is not long before commercial general liability insurance underwriters realize that “gun free zones” are hitting them in the wallet and decide to surcharge the owners of such properties accordingly.

The “invisible hand” of the marketplace will make “gun free zones” uninsurable or unaffordable.

And it can’t happen quickly enough.

“How could a doctor certify he was not a threat to himself or others? Huh? Jail the doctor!!!”

Brilliant analysis and recommendation. But make sure that you open up the prisons to the gun makers and dealers, ammo makers and dealers too. Did he use a car to get there? Well, auto manufacturers are culpable of course.

Next time the doctor needs to invest in a better crystal ball. That way next time he will know when, where and how the next patient will go on a killing rampage. The other altermative is to lock up anyone that has ever been diagnosed with a mental disorder or has taken an anti-depressant or psychoactive drug. Then, we’ll all be safe with about 50-100 million prisoners. After that, invest in Viacom.