These are difficult times for all denominations founded on the divinity of Jesus Christ.

Recent polling indicates that American church attendance is rapidly declining, with "none" the fastest growing faith group cited by 20 percent of respondents up from 8 percent in 2000.

Then during Holy Week, the most sacred seven days for Christians, two tragic events struck that shook the faithful and the world to its core. First, on Monday, April 15, the fire at Notre Dame Cathedral in Paris, followed by Easter Sunday’s deadly terror attacks in Sri Lanka that targeted worshippers as they were celebrating the resurrection of Jesus.

But amidst the decline of the Christian faith among Americans and Europeans – along with church fires, terror, and a worldwide increase in Christian persecution – the world’s largest religion based on Jesus Christ as Lord and Savior – is flourishing in Africa. Furthermore, and amazingly, China is on course to be the world’s most Christian nation within 15 years despite government crackdowns.

What accounts for this exponential growth in non-Western Christian areas? The same as it has always been, the answer in Jesus’ words: “I am the way, the truth, and the life. No one comes to the Father except through Me” (John 14:6).

It started in Jerusalem that Sunday morning when Christ’s disciples discovered an empty tomb with His linen burial cloth "lying there"  -- then they “saw and believed.” But their faith required proof. The same proof needed by Doubting Thomas when he insisted that, “Unless I see the nail marks in his hands and put my finger where the nails were, and put my hand into his side, I will not believe” (John 20:24-29).  Fortunately for Doubting Thomas, he got his wish when the resurrected Christ appeared to show Thomas proof of His wounds.

Today, I believe that the world is in need of another “Doubting Thomas” moment and I am proud to announce that such an event is forthcoming.

Tuesday at the National Catholic Prayer Breakfast in Washington D.C., the following announcement was made from the podium on behalf of a major sponsor:

“Museum of the Bible is excited to propose a groundbreaking, high-tech, innovative exhibition about the Shroud of Turin with a mission to explore its history, mysteries, facets, and themes by utilizing state-of-the-art imaginative displays.”

The operative phrase is “excited to propose.” Henceforth, in order for the Museum to produce what would be the most creative, high-tech Shroud exhibit in the world, targeted to open in January 2021, at least $2 million must be raised.

My regular readers know that I am a long-time writer and proponent of the Shroud of Turin. But for those unfamiliar, it is a 14.5 feet by 3.5 feet linen cloth that bears a faint, yellowed image of a naked, crucified man, believed by millions of Christians to be the burial cloth of Jesus. Known for its mysterious properties, it is the world’s most studied, analyzed and revered cloth. Since the 1500s the Shroud of Turin has been housed in the Cathedral of St. John the Baptist in Turin, Italy, which explains its name.

Over the past year, a Shroud ministry I founded in 2018 along with leading Shroud experts, has been in discussions with the Museum of the Bible about the merits of a Shroud exhibit that will explore the cloth’s mysteries utilizing the most innovative display technology. Such technology is already a hallmark of the state-of-the-art Museum of the Bible.

Since its opening in November 2017, the 430,000-square-foot museum, Washington D.C.’s third largest just blocks from the Capitol, has joined the city’s pantheon of great museums receiving a 4.5 of out 5 star rating from TripAdvisor.

Of course the Shroud itself will not be present since it is forbidden to travel but, pending funding, this exhibit will demonstrate with interactive and virtual reality displays why the Shroud continues to baffle science.

Does the Shroud provide a “Doubting Thomas” moment leaving us with a “snapshot” of a front and back anatomically correct image of a crucified man that cannot be explained but thought to be Jesus a millisecond before his resurrection?

I ask those who continue to believe that the Shroud is a medieval hoax based on the debunked 1988 carbon-dating to help the Museum fund this unique, never-before-attempted exhibit as a way to prove that “hoax.”

If those who insist that the Shroud is fake, then we must counter with the question, “What if it is real?”

The world could use a “Doubting Thomas” moment about now, and this is why this proposed Shroud exhibit at the Museum of the Bible must be funded, and I have great confidence that it will.

exactly how would that ever be proven...?

It is a matter of faith

"If I were you, I'd retain a healthy dose of skepticism. If you haven't already done so, you might try reading the Byzantine history of the Mandylion .... Notice that in each of the two separate accounts given of the Mandylion's origin, the cloth was found in proximity to a "tile" (keramion in Greek) upon which an identical copy of the image on the cloth had been inexplicably engraved. To my mind, this suggests that the image supposedly placed above the gates of Edessa by Abgar in the first century was not a cloth, but an image of the crucified Jesus sculpted in stone. That makes much more sense, because (1) a cloth would have quickly deteriorated if openly displayed in the manner suggested by the text; and (2) there is no mention of such a cloth in Eusebius's ecclesiastical history, although pre-sixth-century texts do mention the fact that the sick Abgar was keenly interested in knowing precisely what Jesus looked like and even sent a commission (Ananias) for the purpose of capturing his likeness. When Abgar's son reverted to paganism, threatening the destruction of the icon, it seems hardly logical that, had the icon been a piece of cloth, it would have been bricked-up into the niche in which it lay--it would have been far more expedient simply to have removed it to a safe location. If the image, however, had been a cumbersome piece of statuary, incorporated within the city walls, the best way of removing it from sight might well have been simply to brick over the place in which it reposed. The Byzantine account (number 2) states that the "tile" was probably placed in front of the cloth for protection. Under the most logical scenario, the exact opposite would have been the case, i.e., a piece of plain cloth was probably placed in front of the stone image for the purpose of covering and protection. If, as the legend suggests, this piece of cloth and work of statuary stood undisturbed in close proximity (albeit not necessarily in contact) over the course of four or five centuries, it's neither illogical nor presumptuous to hypothesize that somehow the image of the statue transferred itself to the cloth. I don't profess to know exactly what agency might have been involved in such a transferral; however, it is a well known fact that many rocks, especially of the sedimentary variety, contain varying amounts of natural radioactive substances, notably thorium and uranium. Over the course of five centuries the slow but steady emanation of radiation from the statuary might well have caused the effect seen on the cloth we know as the Shroud of Turin, that is to say, a very light and superficial dehydration of the outermost fibrils of the linen threads. To the ancients who discovered the cloth, its accompanying statuary would not have appeared as miraculously wrought as the cloth itself, which contained an image formed through an agency they were powerless to understand. Since the statue was an exact likeness of the image it must have seemed to them that the cloth image had been transferred to the stone, rather than the opposite."

Whatever the case, the Shroud remains a true enigma, a phenomenon that is not to be taken lightly, nor to be dismissed out-of-hand.

That’s why it works so well as a fund raiser.

If by “proven”, you mean in the sense of a mathematical proof, of course never. But “proving” in the courtroom sense of “beyond a reasonable doubt” is still unlikely, but not so far-fetched.

There is a wealth of forensic evidence making a very strong case that the shroud was wrapped around a man who died as a result of crucifixion (see the many Shroud web sites for details). There is significant, but weaker evidence tying the shroud to Jerusalem in Jesus’ day (pollen, minerals, absence of vanillin, etc.) The C-14 dating that supposedly dated the shroud to the middle ages has now been largely debunked.

As to tying it to Jesus specifically, there are several details (whipping, crown of thorns, legs unbroken) that are described in the Gospels but not usually seen with crucifixion. Beyond that, I resort to Occam’s razor - why would the shroud from another victim have been preserved? When one looks at the totality of evidence, that the Shroud was Jesus’ seems to be the simplest explanation that fits the facts.

Your flip response notwithstanding, careful review of all of the evidence, and application of Occam’s Razor, gives the skeptic a tough roe to hoe

How many other fabric items of the same construction still exist from 2000 years ago still exist?

The only way to “disprove” that it’s real is to recreate it, using techniques pertaining to the age a couple thousand years ago. The image has already been verified as not painted or dye is used, but burned into the fiber through a radioactive type of event that is unknown. The only way that could even be done today is with a laser printer. It also appears to be a 3D image. http://shroud3d.com

The closer you get to the image the more it just becomes a smudge here and there - you have to view it at least 18 feet away to discern any image; whereas in a painting the closer you get the more detail you see. Spent three days at a Shroud seminar.

Author asks.....”If those who insist that the Shroud is fake, then we must counter with the question, “What if it is real?”

Author asks.....”If those who insist that the Shroud is fake, then we must counter with the question, “What if it is real?”

The item is known as the Tarkhan dress. It was discovered in 1912 by one of the most famous Egyptologists in history – William Flinders Petrie. Petrie excavated the site of Tarkhan, located 50 km (31.07 miles) south of Cairo, in 1912 – 1913. The impressive textile was found in one of the tombs, which was a large mud-brick niched construction. The tomb was built during the First Dynasty (c. 3218–3035 BC). 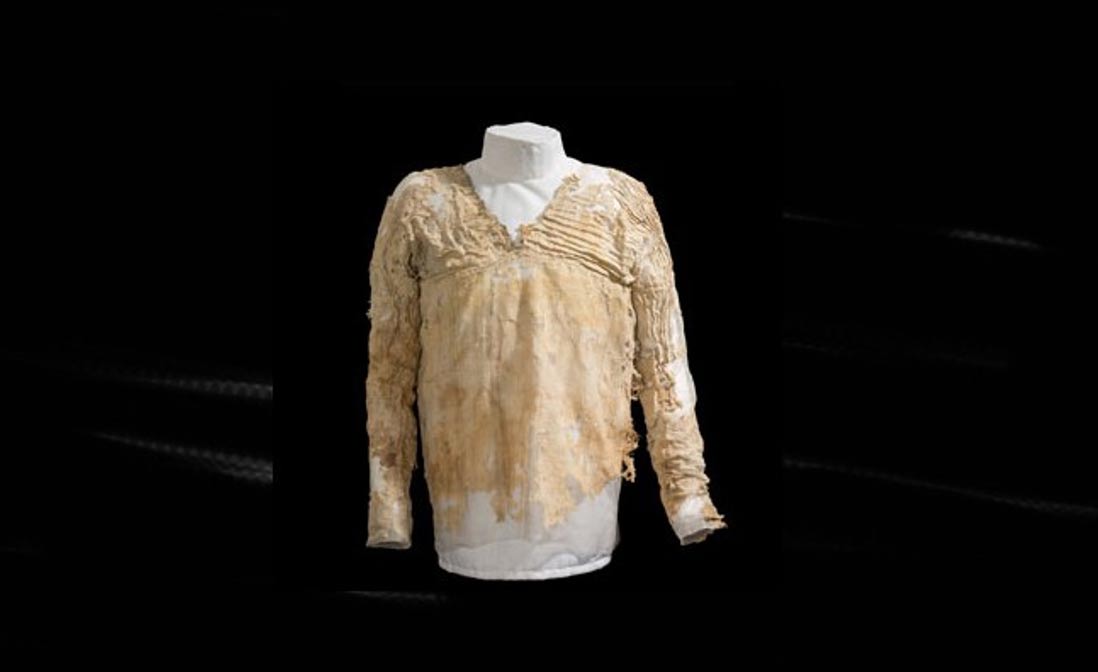 Odd how the shroud suddenly popped up in Europe after more than a thousand years. Where had it been all that time?

Well yeah. I mean it’s not made of Van dyke brown and crimson white like a painting. It’s a radioactive occurrence of some sort when its burned into the cloth. No photo that I’ve ever seen reveals more details as a negative than a fade out positive If viewed as a negative, it’s much more defined. All I want to see it exposed as a fraud is it being recreated with the tools of the time. Has yet to be done

19 posted on 04/28/2019 9:33:40 AM PDT by Bommer (Help 2ndDivisionVet - https://www.gofundme.com/mvc.php?route=category&term=married-recent-amputeca)
[ Post Reply | Private Reply | To 11 | View Replies]
To: mad_as_he$$
This shroud Discovered from inside an ancient Egyptian tomb ..dated 2,000 years ago. The shroud, which was made of linen and miraculously intact, had been hand-painted with an artistic depiction of the Egyptian god of the afterlife and underworld, Osiris.