President Trump and Hillary Clinton are still going at it, and if Trump has his way, they'll square off again in 2020.

President Trump tweeted Monday that he hopes "Crooked" Hillary Clinton runs for president again, even as the former secretary of state was telling an Australian media outlet that former FBI Director James Comey gave her the "shiv."

"I was recently asked if Crooked Hillary Clinton is going to run in 2020? My answer was, "I hope so!" Trump tweeted.

Trump was pretty quiet about Hillary for awhile, but not now !

Lock her up was one of his rallying cries. But instead he tried to play nice and now all it’s done is bite him in the ass.

Well since Mrs. Clinton and her gang are above the law, I would not be surprised when she wins in 2020.

Bring it Shrill. Her constant yammering, whining and complaining about her loss brings her closer to irrelevancy than ever.

8 posted on 10/16/2017 8:32:52 AM PDT by albie
[ Post Reply | Private Reply | To 1 | View Replies]
To: servo1969
Imagine you are Comey and you have spent nearly your entire professional life bailing Hillary and Bill out of one scrape with the law after another. And, when Hillary loses, because she is a horrible tone deaf candidate, you get blamed for her not getting the presidency. Even when you soiled yourself by not handling the email scandal according to FBI protocol.

Hillary's handpicked lawman could not rescue her from her own inability to be even a good candidate.

Comey should spend a couple of those millions he was paid to make Hillary look as if she were completely innocent of every charge and write a tell all. The money would help him with a good editor and a security detail.

Bwhah, hah, hah, ridiculing Kankles is the perfect response, it will wind up Kankles’ rage even more. She hates being ridiculed LMAO.

Would Hillary still another DNC Primary?

Answer: Of course the witch would do it.

“Would Hillary still another DNC Primary?”

That should have read “steal”.

Lock her up, stop the nonsense. Expose her for what she really is

1) When, is the Trump administration and the Department of Justice finally going to indict and put Hildabeast on trial for any number of her plethora of felonies, treasonous activities and "high crimes and misdemeanors"?

2) Why hasn't she already been arrested?

There are more than enough crimes and evidence readily available to put this witch in prison for the remainder of her life and then some.

Unless and until President Trump acts Hildabeast will continue unabated to habitually do everything within her power and crime syndicate of sycophants to destroy both him, his patriotic agenda, and his administration. The sooner President Trump wakes up to this reality the better.

With that much hate in body she will never last till 2020.

> Well since Mrs. Clinton and her gang are above the law, I would not be surprised when she wins in 2020. <

Hillary lost for many reasons. But high on that list were three mistakes she made:

1. Hillary was too lazy to campaign Michigan, Pennsylvania and Wisconsin. Trump won each of those states by less than 1%.

2. The DNC was too lazy to completely rig the vote.

3. The DNC was too lazy to sideline Jill Stein.

Hillary (or whoever runs) and the DNC will not make those mistakes again in 2020. They will not be lazy and overconfident. Trmp will be the underdog, again. And underdogs often lose.

A bully took my backpack...uh,

It accidentally blew down a storm drain...uh,

I lost it because the girls in this class like Donnie better..., uh,

At this point, what difference does it make?” 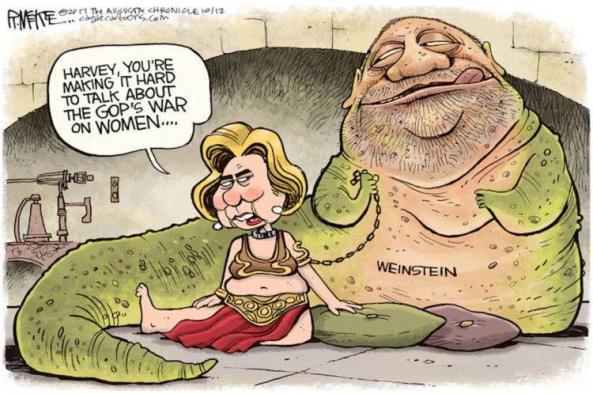 The most potent thing you can do to a liberal is ridicule.

He’ll know MUCH more about her, her associations and her past SOS activities.