Clinton Refuses To Say Whether Or Not She Wiped The Server (“Like with a cloth or something?”)
YouTube ^ | August 18, 2015

Clinton Refuses To Say Whether Or Not She Wiped The Server

“And if you elect me Student Body President, I promise to put a Coke and a Pepsi machine in the lunchroom....and I’ll keep all the money.” 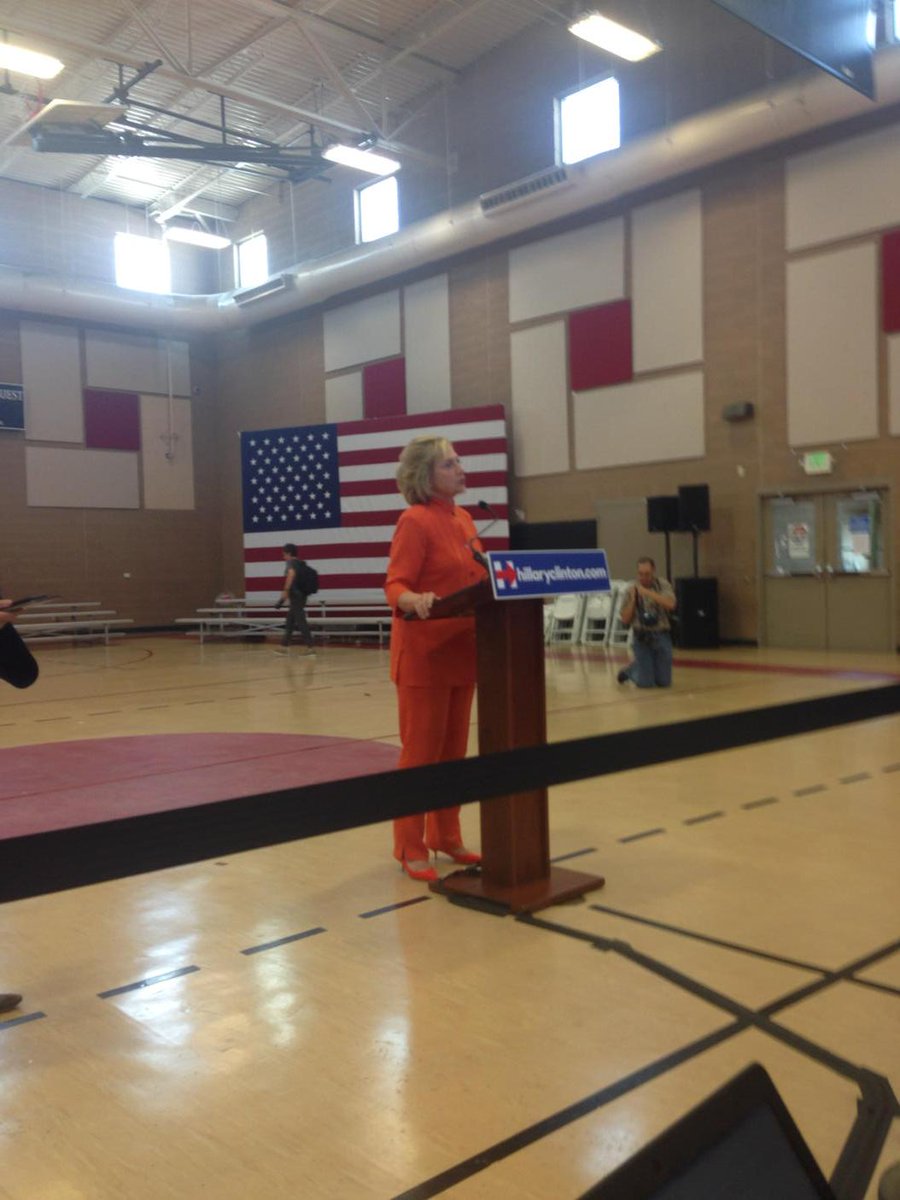 22 posted on 08/18/2015 3:54:28 PM PDT by newfreep ("Evil succeeds when good men do nothting" - Edmund Burke)
[ Post Reply | Private Reply | To 1 | View Replies]
To: rdcbn
I find her choice of colors for this presser intriguing. Glad she seems to like incarceration orange because it may be a color she sees a lot of in the future. She is just sticking her finger in our eye with that orange jump suite. She is basically sayin to us F off. She knows exactly what she is doing.
23 posted on 08/18/2015 3:55:14 PM PDT by VastRWCon (LARGE PRINT GIVE IT, small print take it away.)
[ Post Reply | Private Reply | To 13 | View Replies]
To: maggief

It’s the Great Pumpkin! Rising up out of the pumpkin patch!

“It’s the Great Pumpkin! Rising up out of the pumpkin patch!

But don’t feed it any pumpkin bread

(One of the funniest Simpsons episodes of all time)

The way it should go down:

The way it WILL go down:

27 posted on 08/18/2015 4:04:39 PM PDT by Bon mots
[ Post Reply | Private Reply | To 1 | View Replies]
To: maggief
Platte River Networks is a part of Denver Technology Partners. On their board sits one Nidal Allis. Nidal Allis is President and CEO of TechnoRescue, another part of Denver Technology Partners. TechnoRescue specializes in, among other things,

I was thinking along the lines of pumpkin, but I think you are much closer to the actual color.

wow, you’d think her handlers would be smart enough to never put her in prison orange.

Under normal circumstances, Hillary would have answered reporters’ questions with lies. Why else do Democrats hold news conferences except to lie and propagandize?

But at this point Hillary has probably realized that if she lies to the public about wiping her classified e-mails, she’ll also have to repeat the same lies when she’s under oath, whether testifying before Congress or in a court of law, in which case she’ll be sent to prison for perjury. 33 posted on 08/18/2015 4:52:23 PM PDT by Company Man (Hillary for Prison 2016)
[ Post Reply | Private Reply | To 1 | View Replies]
To: Paine in the Neck; hoosiermama; LucyT; WildHighlander57; Liz; thouworm
“Platte River Networks is a part of Denver Technology Partners. On their board sits one Nidal Allis. Nidal Allis is President and CEO of TechnoRescue, another part of Denver Technology Partners. TechnoRescue specializes in, among other things,

ast-forward from TechnoRescue’s Earth Day event to this July, when an I-News camera found workers at the company’s Commerce City facility loading CRT monitors — short for cathode ray tube — into a shipping container. I-News tracked it to Hong Kong, where the government has banned the import of toxic e-waste, but the underground trade persists.

Allis said the shipment was arranged by a business partner and that he thought they had gone through government channels to make the shipment. They hadn’t. Hong Kong officials sent the shipment back, labelling it “waste,” and U.S. officials want more information.

The EPA is now also reviewing the July shipment of CRT monitors that I-News witnessed from the warehouse shared by Allis and his business partner.

Allis initially said that he and his business partner, Henry Renteria-Vigil, had followed EPA procedures for the shipment.

“I used to not ship anything overseas at all,” Allis said, “because I didn’t trust anybody. But after I learned I can get it cleared with the EPA, I’m shipping out those CRT monitors because there’s no better solution right now than to get them reused.”

But Allis later distanced himself from the shipment. He said that it came from Renteria-Vigil’s now-defunct company, Next Generation, which shared the same building, materials and workers as the other companies owned by the two men.

Renteria-Vigil and his business partner Allis said their new company, R2 Stewardship, will not send any more electronics overseas. “I think the perception,” Renteria-Vigil said, “of shipping overseas — people have a bad taste in their mouth.”

“You give it away, often times it's purchased by organized crime, they buy it off of Craigslist, they'll buy it from reclamation centers that don't destroy, they send it overseas to china and china pulls off the data,” said Sileo.

Tecnho Rescue has several certifications for recycling and data wiping making them a reliable place to get rid of your junk.

“We have the capability of doing 300 hard drives at a time through our data destruction service which is DoD approved,” said Allis.

She knows she paid good money to have the original drives melted down to slag.

Thanks, Maggie. ... Have you noticed an American flag showing in a lot of Hillary's photos? It's a subliminal message for low-information voters to think she is presidential material.

And, as usual, she's couching her statements.