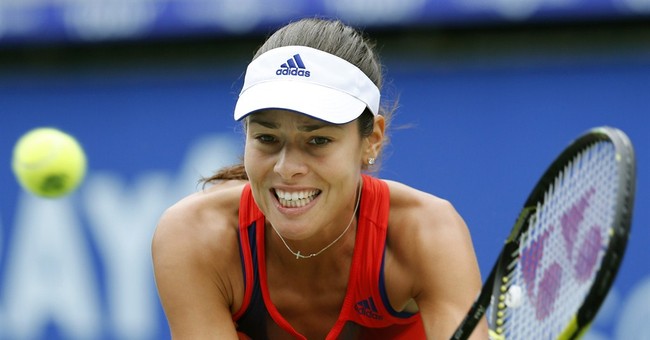 You can tell who the keepers of American culture are by, among other things, the anniversaries they mark. We're currently being invited to revel in memories of the "iconic" tennis match between Bobby Riggs and Billie Jean King, the so-called "Battle of the Sexes". Robin Roberts of ABC News recalled King's "stunning triumph". ESPN explained to younger viewers that King "won for all women". The New York Times' Gail Collins gushed that King's victory 40 years ago was a message "for any woman who had ever worried about being laughed at if she stepped out of line."

Really? One tennis match decided of all that? First things first: The notion that women's equality rests upon women being just as physically powerful as men is both wrong and doomed. It's wrong because women do not merit equal treatment under the law because they have the identical abilities to men. Equality under the law is a matter of legal and moral standing -- not equality of condition.

It's doomed because it's crazy to suggest that women and men are equals in physical strength. That we still argue about these things is more worrying evidence of resistance to science than skepticism about global warming will ever be. Though you can lose the presidency of Harvard for saying it, there are differences between the sexes. Among the least interesting but undeniable is the differential in upper body strength.

So a 29-year-old, five-time Wimbledon female champion, Billie Jean King, was to play a 55-year-old former Wimbledon male champion, Bobby Riggs, and this was supposed to prove that women were in some cosmic sense just as "good" as men or maybe better?

Why was there no match-up, ever, as far as I know, between male and female tennis players of the same age? Who wants to place bets on a contest between Rafael Nadal and Serena Williams, the winners of this year's U.S. Open? No takers? Not surprising. The New York Times analyzed serve speeds at the 2012 U.S. Open and found that Serena Williams had a serve speed of 125 mph (the fastest among women players). Sixty-nine of the 94 men players served faster than Williams. Only five of 82 women players hit a serve at 120 mph, whereas only 5 of 94 men failed to achieve that speed.

With speed come aces. Only 20 women were able to get 10 aces in the match, compared with 67 men (though men play more sets).

The point is, the ridiculous circus show of Billie Jean King and Bobby Riggs didn't even change tennis -- far less America. Did men and women start playing one another after that? Of course not.

The match wasn't so much a set as a set piece. Riggs and King played their assigned roles to the hilt, Riggs pretending to be a "male, chauvinist pig" as the epithet of the time had it, who claimed to believe that women belonged in the kitchen, and King doing her earnest women's lib thing. Before the match began she presented Riggs with a squealing piglet. Everyone at the time acted as if something were really at stake in the outcome.

It may even have been fixed. ESPN has published an interesting piece suggesting that Riggs threw the match to settle his gambling debts. That he was a lifelong gambler with ties to the Mafia is undisputed. He had trounced reigning champion Margaret Court four months before. His son and others confirm that he had visits from mob leaders in the weeks before the King match. This has renewed debate about the game and about whether the 55-year-old was beaten fair and square by the 29-year-old.

The game didn't prove anything and didn't change anything. It was a confection of hype, publicity, money and showbiz. Leave it to the keepers of our cultural flames to treat it like D-Day.

What about all the other victories women have won in the “Battles of the Sexes?” Aren’t those victories important? Why do they keep having to go back to that one match 40 years ago? /sarc

plus, bjk was allowed to use the doubles alleys, whereas rigs wasnt.....

“What about all the other victories women have won in the “Battles of the Sexes?” Aren’t those victories important? Why do they keep having to go back to that one match 40 years ago? /sarc”

I didnt realize that there were a number of different “battles of the sexes in tennis and the women handily lost all of them except for King who was 26 years younger than Riggs. There is also a suspicion that Riggs lost on purpose to pay off gambling debts.

The only other “Battle of the Sexes” was some sort of female karate Black Belt vs. a male boxer (I believe). The woman, IIRC was the world champion Black Belt. The boxer was some shlub. Well, the match began. The man walked over, picked up the woman, and placed here outside the ring (thereby winning). All the while, the woman was flailing around, trying to hit the guy. I saw it broadcast on TV. The whole “battle” took about 10-15 seconds.

The media completely blocked out all discussion of last year being the 40th anniversary of Bill Ayers bombing the Pentagon.

I think it’s likely Riggs threw the match or least didn’t give it his all.

Even if he didn’t threw it that brings up a better point, a good male player who was 20 years younger than Riggs would have badly kicked her butt. It was a stunt designed for her victory.

9 posted on 09/24/2013 6:33:37 AM PDT by Impy (RED=COMMUNIST, NOT REPUBLICAN)
[ Post Reply | Private Reply | To 1 | View Replies]
To: afraidfortherepublic
Billie Jean King, shortly thereafter, proudly and publicly announced that she’d had an abortion, thus endearing her to feminists forever. Sarc/off

The most shocking thing was that some guy thought her attractive enough to be able to make the baby in the first place.

The old battles of the sexes were nothing compared to the experiment we are currently doing with our military. These will be life and death on the battlefield. From past “battles” we can predict the women are going to be slaughtered, all in the name of political correctness.

Today’s women tennis players and the game they bring are very much better than what was going on 40 years ago. The best womens tennis in those days wasn’t worth walking across the street to watch.

12 posted on 09/24/2013 6:55:10 AM PDT by varmintman
[ Post Reply | Private Reply | To 1 | View Replies]
To: Kaslin
Mona should stick to bashing Dems. Serena's routine has a faster serve than Nadal. As if the speed of a serve is the measure of it. Placement, spin, angle are all important, that is why Nadal can defeat faster serving Men.

The amazing thing overall is that women can come close to matching mens world records in different venues even though they are physically different!

BZZZZT. Not. (Where do these myths get started....)

Riggs had defeated the #1 female tennis player in the world (Margaret Court) a few months before ....

16 posted on 09/24/2013 7:15:01 AM PDT by AuH2ORepublican (If a politician won't protect innocent babies, what ma kes you think that he'll defend your rights?)
[ Post Reply | Private Reply | To 9 | View Replies]
To: Cowboy Bob
I remember a discussion I had with a female co-worker on the assembly line where I worked at the time. She was wailing that BJK was sure to be defeated and it would mean a setback for women everywhere.

Further, I pointed out that BJK had the advantage in age alone and Riggs smash-mouthed talking was merely to garner publicity which would mean more dollars in both of their pockets.

I even bet my co-worker $20 that BJK would win. She refused to take the bet because it would be betting against her own kind. But she was absolutely sure that Riggs would win because men had some magical reach ability in a sport which didn't involve muscular strength.

17 posted on 09/24/2013 7:39:16 AM PDT by Vigilanteman (Obama: Fake black man. Fake Messiah. Fake American. How many fakes can you fit in one Zer0?)
[ Post Reply | Private Reply | To 2 | View Replies]
To: AuH2ORepublican
Riggs had defeated the #1 female tennis player in the world (Margaret Court) a few months before

Was this match ever publicized or televised???

What were the rules of play at the Bobby Riggs vs Billy Jean King tennis match?

Riggs got one serve -— King got two.
Riggs hit to the singles court -— King hit to the doubles court.

plus, i watched the match as a 14 year old and remember thinking how unfair it was that bjk got to use the whole court and b.r. didnt....