in before the usual “I like Sarah...but” folks show up to critique HER but not the speech...

LOVED HER SPEECH!! I read some of the quotes on national review..this one is a good zinger..nice jab at Jeb Bush..

“I say this as someone who’s kind of fertile herself,” the mother of five told attendees at the Faith and Freedom Coalition Road to Majority conference today. “I don’t think that where’s we want to go in deciding how will we incentivize the hard-working responsible families who want to ….follow the law, and become Americans versus those whose very first act on our soil is to break the law. “

During his speech at the same event the previous day, Bush had said that certain races currently had higher fertility rates, and noted that the United States was not replacing its population quickly enough.

Palin also derided the Gang of 8 bill. “Let’s not kid ourselves in believing that we can rebuild our majority by the way,” she urged, “ by passing a pandering, rewarding the rule breakers, still no border security, special interests –ridden, amnesty bill.”

Now THAT is the Sarah Palin that should be President.

Check out this quote..

“Our government spied on every single one of your phone calls but couldn’t find two pot-smoking deadbeat Bostonians with a hotline to terrorist central in Chechnya. Really?… And it’s built an apparatus to sneak into all of the good guys’ communications but…whoopsi-daisy… It missed the Fort Hood murderer of our own troops despite this Islamic terrorist declaring his ideology in numerous army counselling sessions and on his own business cards. But, whoops, no red flags there. Really?”

LOL NO ONE DOES IT BETTER THAN SARAH!!!

I adore that woman. She has no fear. God Bless her heart.

Some folks won't be satisfied unless she advocates setting up machine gun nests along the border.

Let’s make that wonderful woman our next ‘real’ president.

I knew she’d bring down the house with her speech.

I hope the activists who attended the conference and received training left there armed with the tips, tricks, and tools we need to elect more conservatives to the House and to take the Senate in 2014.

Yep, they will keep on bringing up what she said in 2008 as if a person is not allowed to ever change his/her mind. I LOVED how she jabbed back at Jeb Bush God I can’t stand that guy

I loved her speech. There are many who want to criticize her voice, yet I hear nothing about the screechy, nasally voice that comes from Hillary Clinton. Yes, even on this forum there are those who attack her. I’d rather hear her all day long than the tyrant we have in the WH. I can’t stand the sound of his voice.

13 posted on 06/15/2013 12:31:45 PM PDT by Catsrus
[ Post Reply | Private Reply | To 5 | View Replies]
To: Sarah Barracuda
“Let’s not kid ourselves in believing that we can rebuild our majority by the way,” she urged, “ by passing a pandering, rewarding the rule breakers, still no border security, special interests –ridden, amnesty bill.”

Does anyone really believe that any immigrants, legal or not, will be willing to tax themselves to pay for Social Security and Medicare for people who were too selfish to have enough children of their own? The United States started committing suicide in the 1960s after the baby boom. Filling the same territory with people who don't share the culture that formed the US in the first place means a new country, not a continuation of the historic USA.

“Now THAT is the Sarah Palin that should be President.”

Wouldn’t it be fun to watch her run against Hillary in 2016?

(But unfortunately I don’t think it will happen)

Ask and You shall recieve Sarah Ping!

Thanks much!! Was hoping to see this posted ;) 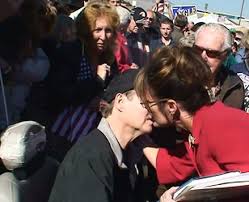 Pretty much handed Jeb his pompous @$$on a platter.