The White House pool report noted that Obama left at about 1 p.m. for the course at Andrews Air Force base, and his golfing parters included White House Trip Director Marvin Nicholson and photographer David Katz.

Playing through! This mess is cutting into my time
on the green. He he he . . . not really.

lol, thanks for the pic, lol

I wonder what would have been said if Obama had gone yachting and Hayward had played golf. 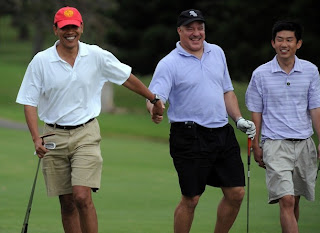 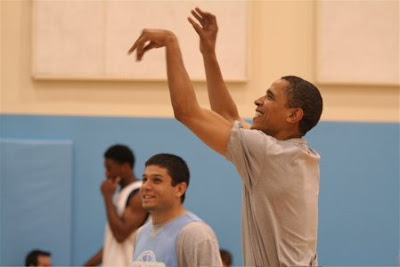 Haven't you heard? It's a paperless society. It's all on his Blackberry....God forbid he drops it on the tarmac.

Thank you for saying that. I was gunna! ;)

obama never misses an opportunity to give the public the “finger” or dis us in other ways too numerous to mention. he seems to enjoy showing disrespect whenever he can toward anyone and anything....like putting up his shoes on the historic desk in the Oval Office, while the top of the desk stares at you empty, so reflective of the “empty suit” sitting in the chair.

obama...the most despicable, enemey of the people “president” of the United States in hitory.

Most of the media is complaining about the BP guy taking a day off but they haven’t mentioned anything about what Obama has been up to like ballgames, golfing, etc.!

“We have been in charge since day one”. - Obama

I agree. Obama should be impeached, tried for treason and shipped to Gitmo to rot with his muslim buddies.

Obama needs to be impeached, tried for treason and sent to Gitmo to rot with his muslim buddies.That picture makes me mad as hell. I hope one of our patriotic SS men puts him out of his misery.

Next libtard that bitches about Bush playing golf while he was in the White House is gonna be spitting teeth. How many rounds does this make for Zerobama so far now?

This has to be by design. I’m getting a bad feeling about this. 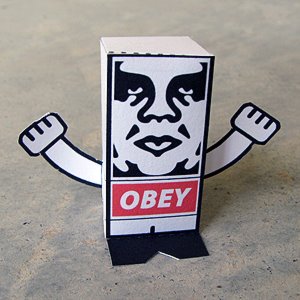 You nailed it! All the other Presidents had piles of paperwork on their desk and duties to attend to. Obama is perhaps nothing more than a prop.

Ah, but WHO is behind him?

Between my job and family I barely have time to wind my watch and this guy golfs twice a week.