Obama and Democrats in Congress are trying to make that happen on April 21st.

President Barack Obama and Congressional Democrats are quietly rushing through legislation (H.R. 3017 & S. 1584) that would actually bring cross-dressing teachers into your child’s classroom. Under the so-called, Employment Non-Discrimination Act (ENDA), your children will be trapped in classes taught by drag queens and transgender activists. Students will be indoctrinated that “alternative lifestyles” are no different than traditional lifestyles. Young children will be forced to learn about bizarre sexual fetishes – and you will have no say in the matter. It is already happening in some states and concerned parents can’t do a thing about it – until now.

This radical bill goes too far. That’s why the Traditional Values Coalition is standing in strong opposition to ENDA. Sign our petition against ENDA today and send Obama, Reid, Pelosi, and their liberal allies a clear message: cross-dressing teachers do not belong in our classrooms!

Apparently they didn’t beat you enough!

By the way, how much help ( formal and informal) are you giving your child now? How much learning is he or she acquiring on his or her own in the home? You might be surprised to learn that it is **YOU** and **YOUR CHILD** who are already doing 99% of the real teaching and learning now. at HOME!

I am amazed when I talk to parents who are sending their kids to government school. Their children have as much homework to do as my homeschooling kids did all day. So?...What am I to conclude? It seems to me that these kids are not only going to school but they are then doing as much homeschooling again ( in the form of homework) as my kids. If this is the case why bother with institutional school?

Finally, if every government school were to close to tomorrow, the same kids who are getting an education now would get it tomorrow. Why? Because institutional schools do NOT teach much. The real learning is due to the efforts of the parents and child in the HOME!

In retrospect, there was a certain lack of attention to style and femininity. Then my Dad mentioned meeting her "room mate" which was the same lady who picked her up from school 10 years earlier. When you are in your 30's, you just know. I am very grateful that I grew up not "knowing".

The public school system is busy committing suicide. Don’t get in the way.

S.1584 - Employment Non-Discrimination Act of 2009
A bill to prohibit employment discrimination on the basis of sexual orientation or gender identity. view all titles (2)
Official Summary
8/5/2009—Introduced.Employment Non-Discrimination Act of 2009 - Prohibits employment discrimination on the basis of actual or perceived sexual orientation or gender identity by covered entities (employers, employment agencies, labor organizations, or joint labor-management committees). Prohibits preferential treatment or quotas. Allows only disparate treatment claims. Prohibits related retaliation. Makes this Act inapplicable to:
(1) religious organizations; and
(2) the relationship between the United States and members of the Armed Forces. Declares that this Act does not repeal or modify any federal, state, territorial, or local law creating a special right or preference concerning employment for a veteran.Provides for the construction of this Act regarding:
(1) enforcement by employers of rules and policies;
(2) sexual harassment;
(3) certain shared facilities such as showers or dressing facilities;
(4) construction of new or additional facilities;
(5) dress and grooming standards; and
(6) provision of employee benefits to married vs. unmarried couples. Declares that, in this Act, “married” refers to a legal union between one man and one woman. Prohibits the Equal Employment Opportunity Commission (EEOC) from collecting statistics from covered entities on actual or perceived sexual orientation or gender identity or compelling the collection by covered entities of such statistics. Provides for enforcement, including giving the EEOC, the Librarian of Congress, the Attorney General, and U.S. courts the same enforcement powers as they have under specified provisions of the Civil Rights Act of 1964, the Government Employee Rights Act of 1991, and other specified laws. Allows actions and proceedings, subject to exception, against the United States and the states.
http://www.opencongress.org/bill/111-s1584/show

Background:
ENDA will make it illegal for employers to refuse to hire an employee based on that person’s “sexual orientation” or “gender identity.” This would mean that a business or organization with more than 15 employees would be barred by federal law from refusing to hire a person because of the person’s sexual orientation or how they identify their gender “with or without regard to the individual’s designated sex at birth.” This opens up the opportunity for anyone to file a lawsuit against a business or organization they claim did not hire them based on their “sexual orientation” or “gender identity.”

Although H.R. 3017 includes an exemption for religious organizations, this religious exemption could lead to courts making a determination if a certain employee was hired to perform work of a religious nature, or if the business or organization is even religious in nature. Additionally, this religious exemption would not apply to a secular company, even if owned and operated by people of faith who believe that homosexuality is a sin. H.R. 3017 will require people of faith to check their religious practices at the door of their workplace.
http://www.hslda.org/Legislation/National/2009/H.R.3017/default.asp?PrinterFriendly=True

ANOTHER REASON TO HOMESCHOOL

This ping list is for the “other” articles of interest to homeschoolers about education and public school. This can occasionally be a fairly high volume list. Articles pinged to the Another Reason to Homeschool List will be given the keyword of ARTH. (If I remember. If I forget, please feel free to add it yourself)

I had a teacher like that. Teachers who are truly able to keep their personal issues in the closet demonstrate a respect for boundaries and are not inclined therefore, to abuse their positions of authority and trust. This also goes for orientations in politics, culture, and religion, etc.

Nowadays there are too many dingbat or corrupt “teachers” who think teaching and indoctrination are synonymous, and that success is how well they can mold impressionable minds with propaganda. To challenge these ego-driven power-trippers is to see just how thin their veneer of civility is toward non-believers.

Two of my best teachers were gay men. I did have at least one lesbian teacher as well.

The lesbian teacher was fairly good, nothing special. She was let go from a convent, and was teaching at my prep school. We did not “know” she was a lesbian but now I have figured out that she was. As a kid, she was just a mannish lady who talked about football (ND) all the time. :)

My gay 5th grade teacher loved us kids. He put so much effort into our class. He did used to bust me for reading Nancy Drew books inside my school books, but other than that I really liked him, and so did the entire class. he made learning fun, and had fun with us. We had no idea that he was gay. He was single in his 40s and spoke with a soft lisp.

My gay high school teacher is still teaching. I adored him; he was one of the smartest people I’d ever met. Back then, he took some risks taking my girlfriend and I to plays and to dinners. He got us student tickets to serious plays downtown. He would have us meet him at his favorite restaurants (which were always in West Hollywood, so we definitely got what he was trying to hint to us). He did not pay for us.

He spoke to us with great respect, taught us so much about culture, and we ADORED him. Once, his friend (partner?) kind of outed him at the table by mentioning their little trip to Mexico. It was not a shock to us. We didn’t care he was gay. We thought the world of him. He took no advantage, and here he was going out with FEMALE students. If he did it to mask his sexuality, it sure didn’t seem like it. He laughed with us and found us at least somewhat good company. 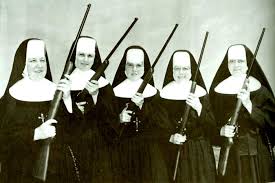 I got this one tabbed for pingout! For sure!

I always appreciate alerts to appropriate articles. One problem is lately there are so many of them.

We are very happy home schooling & plan to stay that way. I think that this cr@p shouldn’t be in the work place at all, schools or otherwise. Can’t people keep their sexual preferences out of the workplace?