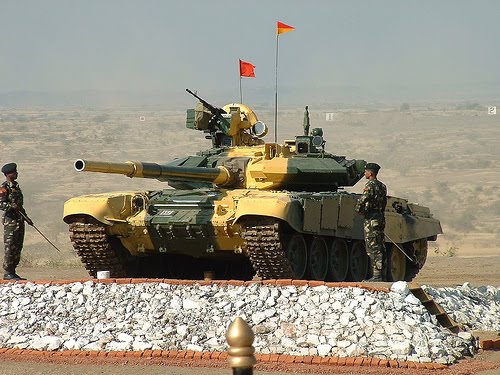 They make really cool roadside decor, after being targeted by A-10’s.

Perhaps someone can enlighten me as to why they did not buy the M1?

So can supposedly the best battle tank in the world (the Leopard from Germany) take out the T-90?

I think this article further illustrates the concerns and arguments of those who have repeatedly questioned and argued against the Indian government’s continued reliance on Russian military hardware.

Interesting anecdote about the Arjun and the M-1. The Arjun was originally meant to be a replacement for the British Vickers MBT and was supposed to weigh in about 40 tonnes with a 105 mm gun. The specs changed to what it is now after Pakistan was offered the M1!!! General Zia Ul Haq and the US ambassador were killed in a plane crash after they witnessed Abrams trials.

Technically its not the Indian government which is at fault here-its the army. Vested interests and resistance to change (logistics, training etc) to be more precise.

“Tanks are overrated.”
Until you don’t have one....

“Hello and thank you for calling the T-90 support line. Please listen as our options have recently changed.

If you are having difficulty with the drive system (forward or reverse), please press 1.

If you are having difficulty with the main cannon or turret, please press 2.

If you are having difficulty with the navigation or other electronics, please press 3.

If you are having difficulty with the machine gun, please press 4.

If your armour has been breached or you are under heavy fire, please hang up and call 1-800-USA-HELP, then press the 9 key.”

>>Hello, I am Sandeep. How can I be helping you this fine day?<<

>>I am sorry your site scope isn’t tracking and just looks blurry. Pleasing you are to write down the following support case number: 87799188211199812234-ARD. Also, is there a phone number I can call you at if we do not complete this call?<<

>>Thanking you. Now, please tell me the serial number on your scope. It is in a tag next to the vodka dispenser.<<

>>Thanking you. Now, we will have to reboot the tank. Please have everyone get out of the tank and type “RBT” on the tank console. When it asks for the authorization code, enter 1771-SANDEEP-1.<<

We can’t get out of the tank. We are next to the Pakistan border!

>>Thanking You. Now that you are out of the tank and the reboot has started, pleasing you are to wait 15 minutes, then type “765-STARTUP” on the console<<

We haven’t started it yet! We can’t get out unless we want our butts shot off!

>>Thanking You. Am I to understand your butt is keeping you from the exiting the tank?<<

“Excluded from India’s T-90s was the Shtora active protection system, which protects the T-90 from incoming enemy missiles. This was done knowing well that Pakistan’s anti-tank defences are based heavily on missiles.”

“Other important systems were also pared. The MoD opted to buy reduced numbers of the INVAR missile, which the T-90 fires. Maintenance vehicles, which are vital to keep the T-90s running, were not included in the contract.”

-A tank ain’t much good if ain’t running.

“All this allowed the government to declare before Parliament that the Russian T-90s cost just Rs 11 crore, while the assembled-in-India T-90s were Rs 12 crore apiece.”

“The MoD did not mention that these prices would rise when the supplementary contracts were negotiated. Nor did it reveal that India’s pared-down T-90s barely matched the performance of the Pakistan Army’s recently acquired T-80 UD tank, which India had cited as the threat that demanded the T-90.”

“And, the INVAR missiles assembled in India simply didn’t work. Since nobody knew why, they were sent back to Russia.”

“With Russia playing hardball, none of the supplementary contracts have yet gone through. The TI sights remain a problem. The army has decided to fit each T-90 with an Environment Control System, to cool the delicate electronics with a stream of chilled air. None of the world’s current tanks, other than France’s LeClerc, has such a system. “

- I might be wrong, but I thought the Israelis fit a lot of their tanks with air conditioning systems. That may have been a crew issue, though, rather than a system dedicated to cooling the electronics.

“The American Abrams and the British Challenger tanks fought in the Iraq desert without air-conditioning. India’s Arjun tank, too, has “hardened” electronics that function perfectly even in the Rajasthan summer.”

-Now see, from I’ve read, one of the big complaints with the Arjun was that the tank’s fire control system has had serious problems with functioning in hot weather. Perhaps they’ve addressed those problems?

That is sooo funny.

...sooo what the article says is that nothing that was assembled in India works?

“...sooo what the article says is that nothing that was assembled in India works?”

If truth be told, it really isn’t India’s fault. World class tanks requires a combination of design talent and manufacturing capabilities that most countries simply don’t have. And getting those capabilities from scratch are incredibly difficult. And most countries with the capability would loathe to share their knowledge, as Russia has wisely chosen not to do with India in regards to the T-90.

America, Russia, and the EU can design and build great tanks because they have been in the business for the last 70 years.

The above 3 aside, only 2 other countries have competitive tank designs and the manufacturing competencies to crank them out by the thousands: China and Israel.

China did it after after decades of investment, espionage, and the good fortune of recruiting a bunch of Russian and Eastern European military scientists after the USSR collapsed.

Israel managed to do it all via their local talent pool. With such a small population, Israel’s Merkava tank is a pretty exceptional achievement.