Barack Obama is the first U.S. president trained in the belief system of radical organizer Saul Alinsky. More than ever, Americans need to study Alinsky’s beliefs.

Information is scarce. Most writing on Alinsky is agitprop, cranked out by loyal disciples planted in the media. Sanford D. Horwitt’s Alinsky biography, “Let Them Call Me Rebel,” is no exception. It seeks to whitewash the father of “community organizing” as an American patriot, humanitarian and champion of the downtrodden.

Despite its bias, “Let Them Call Me Rebel” reveals much about the real Alinsky.

Hillary is also an Alinsky follower, she wrote her thesis on his writings. So this is the wave of the future for America. Be very afraid.Beacuse Joe sixpack has no idea where this radicals teachings will lead the Republic.

“'Somebody once asked me whether I believe in reconciliation,' Alinsky used to tell his followers. 'Sure I do. When one side gets the power and the other side gets reconciled to it, then we’ll have reconciliation.'

"For Alinsky, compromise was just a trick, a way to get your enemy off guard while you plotted your next attack. 'If you start with nothing, demand 100 percent, then compromise for 30 percent, you’re 30 percent ahead,' he wrote."

"One year before his death in 1972, Alinsky published 'Rules for Radicals,' whose dedication page features what may be the clearest distillation of Alinsky’s true beliefs.

"Alinsky dedicated his book to 'the first radical known to man who rebelled against the establishment and did it so effectively that he at least won his own kingdom – Lucifer.'" 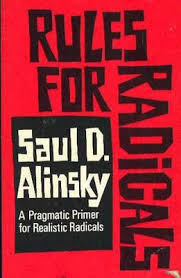 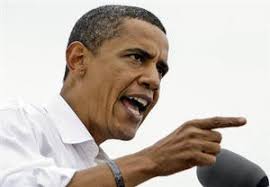 Obama's utopianism is right out of Professor Norman Cohn's The Pursuit of the Millenium: Revolutionary Millenarians and Mystical Anarchists of the Middle Ages. Textbook case from the messianism, utopianism, and demonization of opponents. The Alinskyism is the koran behind this.

The Obammunists are using the Alinksy methods in the anti-Rush game hysteria for misdirection and distraction. Trying to manipulate the dialectic between the anti-Rush hysteria and the utopian socialism of the economic program and promises. Using the media as a bullhorn for street agitation and whooping up the targeted masses, the liberal base, the left.