There has been much discussion in the media and blogosphere regarding the female support or lack thereof for Palin. Is she good for American women? Should she be admired for her humble roots and elbow tossing rise? Should women vote Obama/Biden because of their sensitivity to feminist issues? The following is a pictorial to help those undecided voters sort out who support who.... 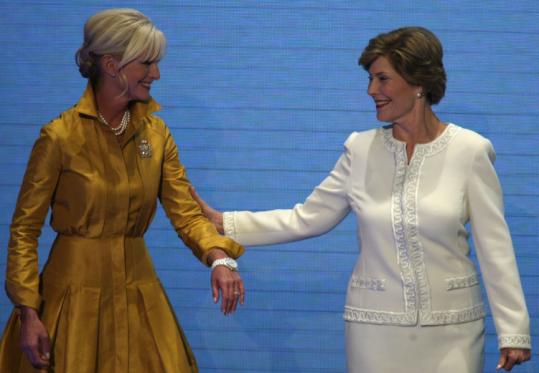 Laura B and Cindy Mac Now for those opposed to the lovely Mrs. Palin Barbara Mikulski must be all of 3’10”. If that lectern were made of a solid material, she would have disappeared. Have I got a couple of hot dates for you! anyone remember Nancy and her husband Dan hosting a morning tv show? whatever happened to Dan?

I don’t have the link but there’s a video on youtube of Gretchen Wilson and Alice in Chains doing a cover of Heart’s “Barracuda”. I find it pretty good and now,ironic!

I would have to conclude that Republican women are beautiful and sexy, while democratic woman are burnt out old hags. Am I missing something?

Is that Code Pink woman real or photo shopped? Is that her tummy and belly button that show below her dress? I thought Streisand’s boobs were sagging and need some support, good grief, that woman needs a major girdle or something.

Never heard of Dan but I would be willing to fill the vacancy.

I thought that Cindy Sheehan supports the Green Party, but maybe I’m incorrect about this.

No, Cynthia is the ‘08 POTUS candidate of the Green Party.

She need an electric wheelbarrow. A girdle would just make it mad.

I don’t know if it was Photoshopped or not. I got that from the ‘net last year sometime.

I forgot about that. Sorry.

Heaton is really pretty too.

Buffy - can bite me any day.

And the other woman - wow!

Megan Kendall and McCullen - Foxes’ best foxes! And the rest are pretty good too. Let’s give Laurie her Dhue!

One concession. Kristen Powers. She is really pretty and for a Democrat, reasonably sane and can actually speak in continuous sentences without a teleprompter. Maybe she is really a closet conservative.

A horrible bustier accident?
Tripped going down the stairs on his garter belt?
I know Tim Robbins and that guy with Susan is no Tim Robbins...