The extent to which our culture has been feminized
jewish world review ^ | Jan. 10, 2001 | Betsy Hart

SEVERAL WEEKS AGO I was attending a lovely party with my family when I overhead a group of four grown men in their 30s and 40s, with no women in their immediate circle, discussing. . . sports? The stock market? No. They were deep in conversation about pregnancy and childbirth.

One fellow with an expectant wife talked about how "we" just had a sonogram, and "we" think this and that of "our" obstetrician, while the others discussed how quickly or slowly their wives had dilated during birth, and things like their feelings when the baby "crested," how they had cut "the cord," what they thought about whether or not "their" childbirth instructor had fully prepared them for the event and so on.

I found the fact that grown men would be voluntarily steeped in such conversation to be at best a little weird. I mean, it's a discussion that the previous 5,000 years worth of their male predecessors wouldn't have dreamed of having. At worst, it's just one more example of the extent to which our culture has been feminized.

I don't just mean men having conversations about obstetrics. I mean that today it seems all things having to do with womanhood are inherently "good." All things having to do with traditional, masculine notions of manhood are "bad." Nurturing, communicating, and sharing are "in." Competitiveness, aggressiveness, and even suggesting that one shouldn't always blubber to a friend about one's feelings is "bad."

Nowhere was this better seen than in our soft and gauzy "do anything to appeal to the women" election cycle we just witnessed. Forget facts, figures, and data. Tears, feelings, long kisses and appearances on Oprah were the centerpiece of this years campaign strategies.

Our military is just one institution that's been smothered by the woman's touch. Thanks to the demands of women in the military, the newest Navy ships being built now include better bathroom fans because of hairspray and brighter lighting for make-up, more room for the extra toilet paper women require and gentler washing machines for the delicate undergarments of our women warriors.

In the workplace the same women who can supposedly handle a fighter aircraft in pitched battle with the enemy (apparently after properly spraying their hair) become delicate flowers who desperately need the federal government's protection against every imagined or real offense from the resident office boor.

Back on the homefront, men are supposed to understand the feelings of their wives and girlfriends and never, NEVER suggest that she may simply be overly sensitive (they are to understand at all times that they are the ones who are not communicating or are not sensitive enough.) And they sure as heck had better fully support their wife's career - or choice to stay home - while changing an equal number of diapers, spending quality time caring for the children, and worrying endlessly about the little one's latest rash or cough.

And anyway when she's birthing the baby, he'd better be there for every gory, painful, "beautiful" moment no matter how much he'd rather be having a double root canal without anesthesia. That's NON-NEGOTIABLE.

(But, he'd also better understand that if she hears a bump downstairs in the in the middle of the night, he's the one who is going to jump out of bed to check it out.)

Bonobos are chimp-like primates in Africa. They are vegetarian, promiscuous, bi-sexual and matriarchal. Male Bonobos depend on their mothers for protection all their lives. In fact in a clan of Bonobos males achieve status largely by being the sons of important females. This strikes me as the feminist fantasy vision for America.

Hey, I'm hardly against men pitching in around the house and helping with kids, or listening to their wives concerns (in fact as a mother of three with another little one on the way, I'm all for it.)

But I am against the feminization of the culture in the sense that traditional feminine virtues are more and more considered vastly superior to traditional masculine virtues. So much so, that men and boys are being both subtly and overtly encouraged to be more, well, womanly.

Sure, we have lots to learn from each other. And anyway not all women are strong on the "traditional" feminine traits nor men on the masculine ones. Still, when as a culture we seek to feminize men, instead of civilize them, we lose something precious: that wonderful and unique combination and coupling of strengths that the different sexes generally bring both to successful relationships and a successful culture.

Instead, we get the war between the sexes that both sides lose.

Many men of today have bought into the nonsense that women should have as many lovers as possible before they offer their lily-white hands to the man they choose to honor with supporting them in their waning years. Of course, many men think they should have as many lovers as possible as well. And fifty percent of first time marriages go down the tubes. 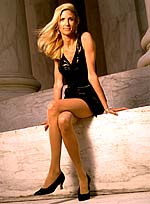 Men are out in the driving rain trying to change a tire, while the womenfolk sit in a warm roadside cafe demanding to know what's taking so long. Just pipe down! The men are working as fast as they can.

Women - and I don't mean to limit that to the biological sense - always become hysterical at the first sign of trouble. They have no capacity to solve problems, so instead they fret. But despite the fearful fifth columnists whiling away the war naysaying America's response, we will win this war.

You just stay warm, girls … the men are fixing the car

Ah... my wife left for a moment. I don't really feel his way and the article is right o...

The wife is back! Gotta go.