Scotland's Leopard Man says a woman accused of being involved in a Satanic killing in Germany was friendly and polite when he met her.

Manuela Ruda is accused with her husband of killing a workmate during a black mass.

At their trial in Germany it was revealed she met Tom Leppard, a Scotsman covered from head to foot in leopard-print tattoos, while she was working in the Highlands.

Manuela, 23, and husband Daniel, are accused of sacrificing a workmate on an open coffin before an altar of skulls at their flat in Bochum, Germany. Frank Haagen, who was 33, was hacked to death with a machete before his head was crushed with a sledgehammer.

The court heard Ruda was 16 when she ran away from school to Edinburgh. She later met Mr Leppard, 68, on the Isle of Skye.

It's reported Mr Leppard, who has spent £5,500 having his entire body tattooed with leopard spots and filing down his teeth to fangs, says she did visit him and had written to him since returning to Germany.

"I liked her. She seemed different if maybe slightly odd," he told the Daily Record. "She was an intelligent, focused young woman with varied interests. She was friendly and polite and we walked and went fishing together."

He said he had detected a change in her from her letters. "The language in the letters did not sound like her," he added.

"The band has no comment on the ongoing investigation."

"I liked her. She seemed different if maybe slightly odd," he told the Daily Record.

She seemed different and odd? We must obtain a picture.

I think this really belonged in Breaking News,
but I wanted to give it some hang-time.

Since we last corresponded alot has happened. I met a guy that drinks blood.

Yesterday we hacked a friend of ours up and bashed his ugly face in. Well, gotta run!

This story isn't about Hillary. Besides, isn't Bill just "married to Satan"? 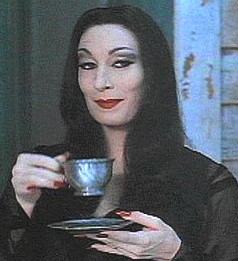 Heard on the news this morning that O.J.'s girlfriend is missing and police said they found her cat dead and the apartment ransacked.Odd, but police said landlord had spoken to the lady recently so police said there was nothing more that they would do.Odd.Odd.Odd.

I swear I am not making this up.

A San Diego computer programmer who has spent £100,000 on tattoos and plastic surgery to turn himself into a 'tiger' wants a fur graft.

Dennis Smith is tattooed from head to toe with orange and black stripes and his teeth have been filed to needle point.
He has also had latex whiskers implanted and surgery to his lips so he has a permanent snarl. He now wants a surgeon to graft tiger fur on to his skin, like a perma-wig.
Mr Smith, who has changed his name by deed poll to Cat Man, said: "I have a collection of old tiger pelts from the days of hunting. I want these grafted on to me. It will cost another $100,000 but will be worth it.
"When I have the coat of a tiger, I feel I will have reached my goal in life."
His fingernails have been crafted into sharp talons while his hands have tattooed markings like a tiger's paws. He says he feels like a tiger.

The short back-and-sides he sported at the University Of California has been replaced with a long orange mane. He has also swapped his glasses for green contact lenses. He holds down a £80,000-a-year computer programming job which enables him to fund the surgery, the Daily Record reports.
He admitted: "Of course people stare at me when I walk down the street but that's the effect I desire. For so long I have equated myself with the tiger that I decided to change myself into one.
"It's the real me. So many men cross-dress without their partners knowing, or dress up and play cowboys or Civil War soldiers at weekends. Me, I'm a tiger all the time and I love it. I had my first tattoos done 20 years ago around my eyes and now my whole body is one pastiche of stripes and shading. I am really proud of it all."

It's the most recent pic of me that I have on file.

Will you be pen pals with the Bride?

Leopard man shuns society for hut on Isle of Skye

A tattooed hermit known as the Leopard Man of Skye lives in a hut made of sticks and stones and bathes in a river.

Tom Leppard dropped out of society years ago after spending £5,500 to have his body covered in spots.

Once a week, the ex-soldier goes by canoe to buy supplies and pick up his pension.

Mr Leppard told Grampian Television: "I spent too long in the forces, 28 years. I couldn't mix with ordinary people."