FEVERISH, ANGRY MAIL poured in from bitter Manhattan termagants in response to a Maureen Dowd column in The New York Times about the "hunks" at Ground Zero. Dowd had ruefully noted that feminism "has done a back flip" since women "now ogle the macho men they once spurned."

The letters weren't complaining about the wild double standard that allows a woman columnist for a major newspaper to objectify men – calling firemen, for example, a "sizzling accessory." No, the bitter letter-writers took issue with Dowd's claim that after Sept. 11, "women get in a swoon when a hard hat with a flag decal wolf-whistles at them."

Whistling at girls, as one letter to the editor earnestly advised, is "an uncomfortable, offensive annoyance indicative of the subjugation and objectification of women in this country."

Men are broken down by profession and categorized as "trophy mates," "foxes" or a "sizzling accessory" on the op-ed page of the "newspaper of record," and Manhattan feminists erupt in indignation about the objectification of ... women!

And that's not even the craziest part. The craziest part is they are incensed about a wolf whistle that never even happened. It was just an abstract point in a typically pointless, rambling and completely nonfactual Maureen Dowd column.

But mainly, the letters complained that Dowd had contributed to "the perception that all of the heroes of Ground Zero were men," as one irate feminist put it. Many selfless acts of women's heroism were detailed. One female hero "helped evacuate an apartment building," for example. Yet another had "rushed to the scene on her day off." At that point, the catalog of female heroics on Sept. 11 began to trail off markedly.

The single strangest tribute to the "female heroes" was this one: "Consider Kathy Mazza, a Port Authority police captain who died at the World Trade Center after drawing her gun to blast open glass walls, allowing hundreds to escape. (Try doing that from a backseat in a burka.)"

What on earth does a burka have to do with it? The key point is that she had a gun. As far as I am aware, there is no scientific evidence establishing that it is more difficult to pull a trigger while wearing a burka.

But as Richard Poe points out in his excellent book "The Seven Myths of Gun Control," feminists hate guns because guns remind them of men. Bubbling with the usual "phallic symbol" clichés, one of the feminists quoted in "Seven Myths" explains: "Just as sex is the ultimate weapon of patriarchy used to penetrate and possess women, the gun's sole purpose it to intrude and wound its victim." Gun control, she concluded, is thus a way to "curb the perpetuation of patriarchy."

This is right where you want to be after Sept. 11 – complaining about guns and patriarchy. If you didn't already realize how absurd it is to defang men, a surprise attack on U.S. soil is a good reminder. We've got men cleaning up Ground Zero (Manhattan had to import them from the surrounding boroughs), men flying bombing missions over Afghanistan, and men on the ground preparing to take Osama bin Laden. (God help the Green Beret who takes him alive.)

There are surprisingly few men, however, in the nation's news pulpits. If the press keeps haranguing Attorney General John Ashcroft about producing a list of the 603 detained immigrants, Ashcroft should offer to release the names on a one-for-one basis with the names of anyone currently serving in the U.S. military who is the blood relative of a New York Times reporter.

When America is threatened from the outside, men are ascendant and Republicans have a lock on the White House. Naturally, feminists are petulant about this disturbing turn of events.

Poe's epilogue, titled "The End of Manhood," is really an epilogue for feminism. After abandoning 30 years of sermons on sexual harassment to introduce the "one free grope" rule when it came to impeached former president Bill Clinton, feminism was already hanging by a thread.

Now that it's a real war and not a Hollywood war, "G.I. Jane" is merely preposterous. To paraphrase Gloria Steinem, combat units need a woman like a fish needs a bicycle. Blather about male patriarchy and phallic guns suddenly sounds as brilliantly prescient as assurances that the Fuhrer would stop at Czechoslovakia.

Another great item in Poe's epilogue for feminism is this: At a Wellesley Center seminar in 1998, teachers and school administrators were encouraged to counteract "gender programming" by having little boys dress up in skirts and high heels. "It's perfectly natural," the instructor explained, "for a little boy to try on a skirt." It's also "natural" for men to whistle at women, but the anti-phallocentric crowd doesn't like that.

We should be down on our knees thanking God right now that it's also "natural" for men to fight, shoot and kill.

Ann Coulter is a bestselling author and syndicated columnist. Her latest book is High Crimes and Misdemeanors: The Case Against Bill Clinton

I wish we could hire some women that look like her. Our office needs it.

In fact, I would recommend double-burqas, just in case the first one breaks!

To: FreedomWarrior
Whistling at girls, as one letter to the editor earnestly advised, is "an uncomfortable, offensive annoyance indicative of the subjugation and objectification of women in this country."

Something tells me that the (probably) whey-faced idiot who made this statement more than likely has never really had to be "uncomfortable" in said situation. Being whistled at (unless you're dressed like a hooker or slut) should most always, IMHO, be seen as a compliment and the (real) men of my acquaintance who admit they've whistled at women say they have done it out of admiration for a pretty girl or woman.

These whinny femi-nazis need to get a grip!

With THAT out of the way --- my votes for best burka candidates:

ALL Femi-nazis (why not, since they don't wish to be noticed by men, anyway?)

Not quite a burqa but it's getting close...just a little more fabric would do the trick! 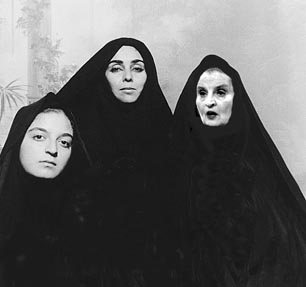 15 posted on 12/06/2001 7:57:25 AM PST by texasbluebell
[ Post Reply | Private Reply | To 10 | View Replies]
To: KentuckyWoman
Actually, women I know, even (especially?) the conservative ones, regard the attention of strangers on the street (or other non-social public place) as "creepy."

We men have a penchant for fixating on a woman. In most cases, that's a healthy loyalty, but sometimes it manifests itself as stalking. Yeah, that construction worker might be whistling at you to pay you a compliment, but pretty soon he's figured out your daily schedule and where you live...