In response to a pro-LGBT concert last night in St. Stephen’s Cathedral in Vienna, Archbishop Carlo Vigano has said the event was a sacrilege and a consequence of idolatry that “darkens the mind and perverts judgement.”

In a message to Alexander Tschugguel, one of the founders of the St. Boniface Institute who led a rosary outside the cathedral while the event was taking place, Archbishop Vigano noted that “once again” Vienna suffers from “yet another homoerotic and blasphemous provocation.”

The cathedral was used Nov. 30 to stage a ‘Believe Together’ concert, hosted by an association called LIFE+ and which marked World AIDS Day. Among the performers in the cathedral was Thomas Neuwirth [aka drag queen ‘Conchita Wurst’] who performed under his new pseudonym ‘WURST.’ 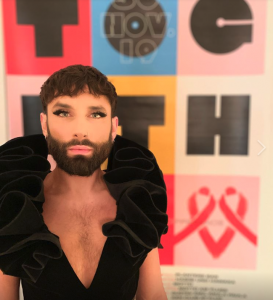 Drag singer ‘Wurst’ performed in the “Believe Together” concert in the cathedral. He also featured in last year’s concert.

“Gay activists, transvestites and transsexuals perform on the Cathedra of St. Stephen,” the archbishop said, “when instead they should receive from the Catholic Church the proclamation of Christ’s liberating Truth and the gift of his saving Love, freely offered to all those who, from the depths of their wounds and repentance, dare to acknowledge their need for salvation.”

But he added that the “enormity of the scandals will never diminish the Lord’s power” and therefore “we have no reason to lose courage or confidence.”

“I join with all my heart the little flock, who are perhaps without a Shepherd but are called to gather in the Heart of the Immaculata to implore from her, through the reparative prayer of the Holy Rosary, God’s forgiveness for the offenses and outrages that have been perpetrated,” he said.

“We wish to redouble our faith and tirelessly implore the Immaculate Mother of God and our true Mother” to help the faithful “persevere in the faith,” Archbishop Vigano added, and closed with St. Bernard’s words of encouragement underlining how necessary the Lord’s grace is in the face of man’s sinful nature.

Tschugguel gained global attention in October when he seized four “Pachamama” statuettes from a church in Rome and threw them into the Tiber. He and many others believed the statuettes, which made frequent appearances during the month-long synod, were being worshipped as pagan idols.

The Vatican claimed they were simply Amazonian objects signifying life and fertility, but was unwilling to offer more details.

Dear faithful gathered in prayer for the recitation of the Rosary outside the Cathedral of St. Stephan in Vienna,

May the Lord Jesus and the Virgin Mary be with you!

We have seen idolatry penetrate the Temple of God and lay claim to the worship due exclusively to the living and true God.

Several small statues, identified as the Pachamama idol, were carried in procession.

Dear Alexander remembered the warning of the jealous God — jealous because He is the “Friend of man,” who is jealous for his eternal truth and his glorious destiny.

This warning echoes in the pages of the revealed Scripture, which should fill us all with sacred trembling: “You shall break down their altars, and dash in pieces their pillars … and burn their graven images with fire!” (Deuteronomy 7:5). You shall drown them in the waters of the Tiber, “for it is an abomination to the Lord your God. And you shall not bring an abominable thing into your house” (Deuteronomy 7:25-26).

Saint Paul teaches us that man falls into idolatry when, having become incredulous and apostate, he despises the knowledge of God and persists in his refusal to glorify him, “The God who made the world and everything in it, being Lord of heaven and earth … himself gives to all men life and breath and everything … ‘In him we live and move and have our being’” (Acts 17:24,28).

Idolatry stifles truth in injustice, it darkens the mind and perverts judgment. Then man, at the mercy of the tyranny of his vile passions and his wandering desires, abandons himself to every form of perversion and impurity, “to the dishonoring of their bodies among themselves, because they exchanged the truth about God for a lie and worshipped and served the creature rather than the Creator, who is blessed forever” (Rom 1:24).

Once again Vienna, the glorious capital that was able to resist the advance of the Ottoman Horde with the weapons of light and faith, suffers — dismayed and scandalized — yet another homoerotic and blasphemous provocation. Gay activists, transvestites and transsexuals perform on the Cathedra of St. Stephen, when instead they should receive from the Catholic Church the proclamation of Christ’s liberating Truth and the gift of his saving Love, freely offered to all those who, from the depths of their wounds and repentance, dare to acknowledge their need for salvation.

I join with all my heart the little flock, who are perhaps without a Shepherd but are called to gather in the Heart of the Immaculata to implore from her, through the reparative prayer of the Holy Rosary, God’s forgiveness for the offenses and outrages that have been perpetrated.

The enormity of the scandals will never diminish the Lord’s power: therefore, we have no reason to lose courage or confidence. Faced with the sinister vision of a church that seems to want to rebuild itself against the faith and against the truth of the human person, that supports and promotes that which degrades life and causes the loss of souls, we wish to redouble our faith and tirelessly implore the Immaculate Mother of God and our true Mother: Vitam praesta puram, iter para tutum, ut videntes Iesum semper colletemur. Keep our life all spotless, make our way secure, till we find in Jesus, joy for evermore (Ave Maris Stella). By teaching us to gaze on Jesus, the Virgin Mary enables us to persevere in the faith as an “Acies ordinata, a deployment of militant, suffering and triumphant souls, united to affirm the honor of the Church, the glory of God and the good of souls. Enlistment is open” (Roberto de Mattei).

As we prepare to cross the threshold of a new liturgical year, Saint Bernard places in our hearts and on our lips the words of our unshakable hope, and our certain faith, as our hearts open to the ardor of Christ’s charity, the only remedies against the advance of iniquity:

“Even now, let us celebrate with all our hearts the coming of Our Lord Jesus Christ… He came not only to us, but for us… The greatness of the grace he has given us shows us the poverty of our need. We judge the severity of our illness from how much it costs to heal it… The coming of the Savior is therefore necessary. The state of man makes His Presence indispensable. May the Savior come soon!”

He also explained it brilliantly, called Bergoglio out on his numerous heretical or even apostate actions and words, and is obviously not beating around the bush anymore. Vigano seems to be the only one who is willing to just come out and say it like it is.

His whole statement is worth reading.

He needs to be the next Pope!

Earlier posting on this disgrace might help explain reaction
http://www.freerepublic.com/focus/f-religion/3797666/posts

7 posted on 12/02/2019 9:07:14 AM PST by mosesdapoet (mosesdapoet aka L,J,Keslin posting here for the record hoping some might read and pass around)
[ Post Reply | Private Reply | To 1 | View Replies]
To: mosesdapoet
I'm particularly aghast about Cardinal Schönborn, who --- unlike the pitiful present occupant of the See of Rome --- has a well-developed mind and the advantage of a solid Catholic education. I can't help but think that --- barring ongoing neuro-psychiatric issues --- his moral and doctrinal apostasy is knowing and intended.

Let us fast and pray for him. I am serious. Very serious indeed.

At one time I had some respect for Cardinal S. I seem to have misplaced it.

There was a time when I thought Cardinal Schonborn might have a chance to be elected pope. He seems to be drifting to the left. He had successful prostate cancer surgery earlier this year and so I think he’s in good health and had to know about this.