The U.S. Conference of Catholic Bishops adopted a letter Tuesday that says the “threat of abortion” remains the “preeminent priority” for Catholic bishops.

The letter will serve as an introduction to a voting guide for Catholics voting in the 2020 presidential elections, according to America Magazine, reminding Catholic voters that their top priority voting should be in voting against abortion.

“The threat of abortion remains our preeminent priority because it directly attacks life itself because it takes place within the sanctuary of the family and because of the number of lives destroyed,” the letter reads, according to America Magazine.

“At the same time, we cannot dismiss or ignore other serious threats to human life and dignity such as racism, the environmental crisis, poverty and the death penalty,” the letter adds.

At least two bishops protested against this portrayal of abortion, saying that Pope Francis has represented life issues differently than the letter represents them.

Catholic Cardinal Blase Cupich, a strong supporter of Francis and the archbishop of Chicago, said the letter should include paragraph 101 from Francis’s 2018 exhortation “Gaudete et Exsultate” — a paragraph that says other lives are “equally sacred” to those of the unborn, including “the lives of the poor, those already born, the destitute, the abandoned and the underprivileged.”

Catholic Archbishop José Gomez, who was elected president of the U.S. Conference of Catholic Bishops Tuesday, said the paragraph was not included because it would make the three-paged letter too long, America Magazine reported.

The publication noted that Catholic Bishop Robert McElroy of San Diego also spoke out against the letter, saying, “It is not Catholic teaching that abortion is the preeminent issue that we face as a world. In Catholic Social Teaching, it is not.”

But Catholic Archbishop Charles Chaput of Philadelphia said that though he agrees with Francis’s paragraph from “Gaudete et Exsultate,” McElroy’s is wrong.

“I’m certainly against anyone stating that our saying [abortion is] preeminent is contrary to the teaching of the pope,” Chaput said, according to America Magazine. “That isn’t true. It sets up an artificial battle between the bishops conference of the United States and the Holy Father, which isn’t true.”

“We do support the Holy Father completely,” Chaput added. “What [Francis] said is true. But I think it has been very clearly the articulated opinion of the bishops conference for many years that pro-life is still [the] preeminent issue.”

They’re not fooling me

That little flare-up was for one purpose and one purpose only... McElroy “making his bones” in the Bergoglian mafia. The anti-American, anti-capitalist, anti-Catholic gang in the Vatican operates under this kind of crazy worldview that the American bishops are these right-wing, abortion-obsessed yahoos bought and paid for by rich, conservative Americans. It’s a total joke, as American Catholics know, with the typical bishop being a sort of weakly pro-life, moderate Democrat. But in Vatican fantasyland, 80% of ‘em are a bunch of right-wingers. Enter liberal/left opportunist Bob McElroy... setting himself up as a loyal, brave Bergoglian in a hostile crowd. Just the right man to be, say, the next Cardinal in Philly.

It will not be the priority. The pope wants Trump out of office, and so will favor a democrat instead of Trump. All democrats are for abortion.

The reality is, the pope doesn’t give a bat’s eyelash about abortion. He is obsessed with taking money from those who earn it and giving it to those who lob around and take money willingly without doing anything to earn it. 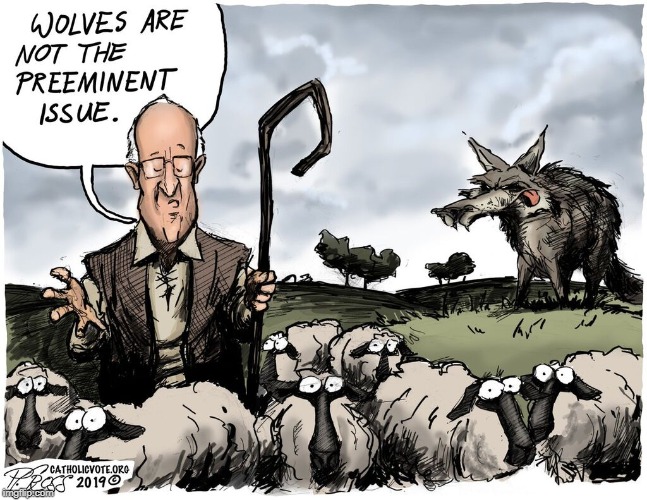 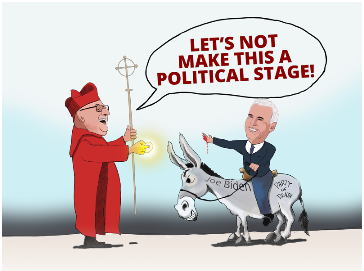