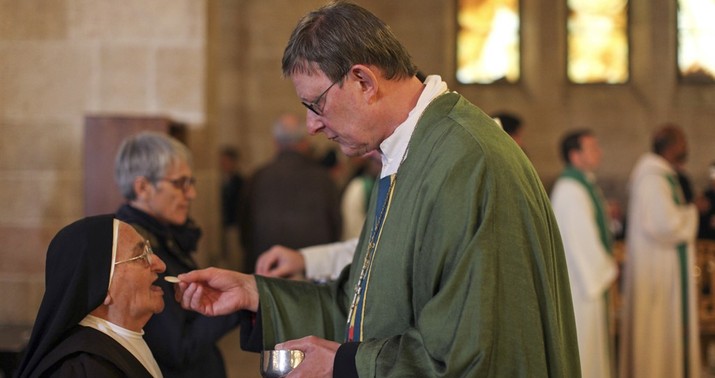 Some Catholics may argue that Bishop Thomas Paprocki has politicized the Eucharist, while others may argue that his action last week is long overdue. The Illinois state legislature passed their Reproductive Health Act last week, which declares abortion to be a “fundamental right” and removes all restrictions on it. Paprocki, the head of the diocese of Springfield, responded by barring two Catholic legislators who sponsored the bill from communion — until they confess their sin and repent of it:

“In accord with canon 915 of the Code of Canon Law…Illinois Senate President John Cullerton and Speaker of the House Michael J. Madigan, who facilitated the passage of the Act Concerning Abortion of 2017 (House Bill 40) as well as the Reproductive Health Act of 2019 (Senate Bill 25), are not to be admitted to Holy Communion in the Diocese of Springfield in Illinois because they have obstinately persisted in promoting the abominable crime and very grave sin of abortion as evidenced by the influence they exerted in their leadership roles and their repeated votes and obdurate public support for abortion rights over an extended period of time,” Bishop Thomas Paprocki wrote in a June 2 decree.

“These persons may be readmitted to Holy Communion only after they have truly repented these grave sins and furthermore have made suitable reparation for damages and scandal, or at least have seriously promised to do so, as determined in my judgment or in the judgment of their diocesan bishop in consultation with me or my successor,” the bishop added. …

“I declare that Catholic legislators of the Illinois General Assembly who have cooperated in evil and committed grave sin by voting for any legislation that promotes abortion are not to present themselves to receive Holy Communion without first being reconciled to Christ and the Church in accord with canon 916 of the Code of Canon Law,” Paprocki wrote.

A multitude of state legislation has moved the abortion debate even further to the absolutist poles, and Illinois is no exception. The RHA would legalize abortion up to the moment of birth and would strip all state regulation from the abortion industry:

Among the provisions that the bill would remove are regulations for abortion clinics, required waiting periods to obtain an abortion, and a ban on partial-birth abortion. In addition, it would lift criminal penalties for performing abortions and would prevent any further state regulation of abortion.

The legislation would require all private health insurance plans to cover elective abortions, and eliminate reporting requirements as well as regulations requiring the investigation of maternal deaths due to abortion.

This isn’t Paprocki’s first use of this authority in dealing with pro-abortion politicians. He also issued an edict against Sen. Dick Durbin last year, AFP recalls, although their recollection is a little fuzzier on Catholic teachings on the Eucharist:

The bishop of Springfield made the same kind of decree against Democratic Senator Dick Durbin in 2018, after he prevented the passage in the US Congress of a restrictive law on abortion. …

“It’s my hope and prayer these lawmakers reconcile themselves to the Church so they can receive communion,” Paprocki said.

Communion, in which Catholics eat bread and drink wine representing the body and blood of Christ, is an essential rite of the faith.

Note to AFP: For Catholics, the Eucharist becomes the actual body and blood of Christ, not its representation. Also, communion is technically a sacrament, not a rite in the Church, although the generic use of “rite” might still work.

Its centrality to the faith, however, has made the Eucharist a kind of political football in the abortion debate. Activist conservative Catholics see the abortion issue as defining, and wonder why other bishops don’t act as Paprocki and a handful of other bishops do in enforcing canon law and the Catechism. Activist liberal Catholics insist that to do so is to interfere in the political process and to marginalize women and the poor, contrary to the church’s stand on social justice.

This conflict came to a head in January, when the Bishop of Albany suggested that a similar edict might be forthcoming against New York governor Andrew Cuomo, after signing and then celebrating similar legislation. Others cheered on Bishop Edward Scharfenberger, while others — even conservative canon lawyers — called for more caution.

Now, as then, the problem exists for two reasons. One is poor catechesis among Catholics, who are confused over the church’s teachings on abortion and the difference between that and other forms of contraception and other sins. The other is a lack of process in dealing with Catholic politicians who actively promote abortion, which leaves bishops like Paprocki and Scharfenberger to ad-lib reactions in order to provide that belated catechesis. The US Conference of Catholic Bishops need to decide on such a process and implement it in a unified and dignified manner as a means not just of enforcing canon law but of fairly instructing their flocks on the consequences of abortion.

This is one can that really can’t be kicked down the road much longer. The more extreme abortion gets in America, the more pressure bishops face in ensuring that Catholic politicians don’t mislead others into sin. In Illinois and New York, those thresholds are already being broken.

Weak.
Support for abortion should be grounds for excommunication.
And all of NY state should be under Interdict. Ditto for Virginia.

Good for this Bishop. Sadly, Democrat politicians are evil personified, this will have no effect on them. If fact, it’s likely that Dem politicians will wear it as a badge of honor.

A special spot in the Kennedy Wing of Hell is reserved for Mike Madigan.

My father and step mother in law are raging liberals and Catholic. She tells the story of how she went to school with Harry Reid and decades later he remembered her name.

Guess that was all it takes to pull the lever for Socialism.

I just don’t get it.

There’s nothing political about it. A person living in a state of mortal sin should NOT present him/herself for the Eucharist. If they do, they commit sacrilege. By keeping them from it, the Church is NOT punishing them ... it is protecting them from further sin. The only ones making this political are the media.

Francisco certainly hasn’t the ‘stones’ to do it.

8 posted on 06/11/2019 8:10:11 AM PDT by Don Corleone (Nothing makes the delusional more furious than truth.)
[ Post Reply | Private Reply | To 1 | View Replies]
To: al_c; SeekAndFind
Denial of Communion is not a "sanction." Why do the bishops (McCarrick, Wuerl, Chaput, Dolan, Gomez, O'Malley, etc.) who give Communion to pro-aborts always call it a "sanction." Because they want to pretend that it is OPTIONAL.