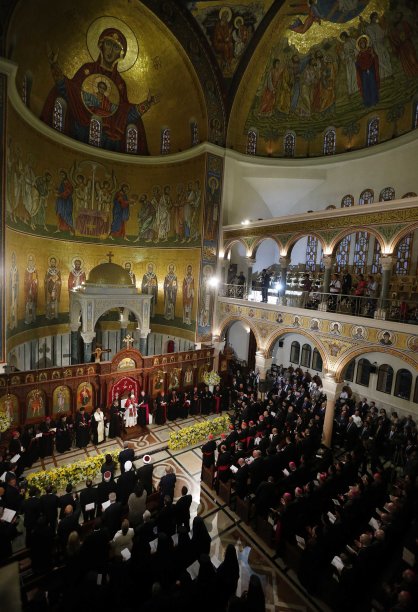 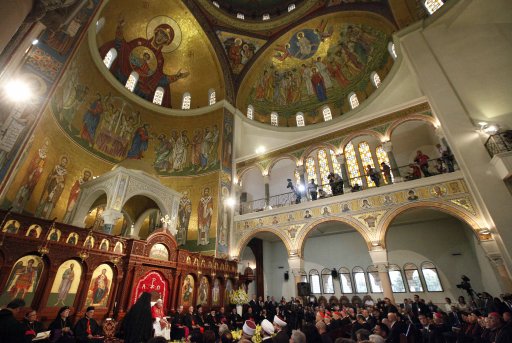 Pope Benedict XVI and Gregorios III Patriarch of the Church of Antiochthe visit the St. Paul Basilic in Harissa near Beirut September 14, 2012. Pope Benedict's visit to Lebanon ranked as potentially his most dangerous even before this week's protests in the Middle East raised the stakes, but he said on Friday he never considered calling it off for safety reasons. 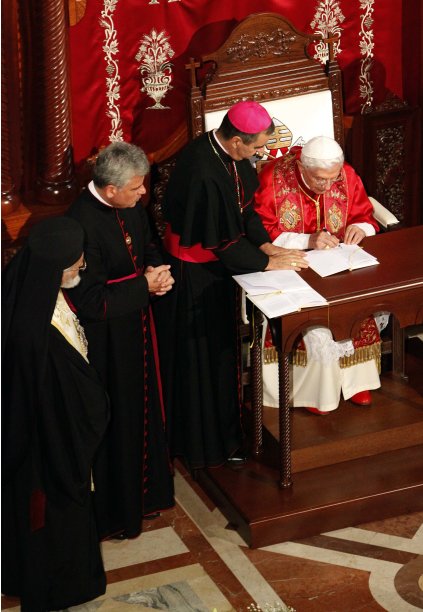 Pope Benedict XVI (R) signs a document as Gregorios III (L) Patriarch of the Greek Melkite Catholic Church of Antioch looks on at the St. Paul Basilic in Harissa near Beirut September 14, 2012.

(Vatican Radio) Pope Benedict XVI has signed the post-Synodal Apostolic Exhortation of the Synod of Bishops for the Middle East. In short his “roadmap” for the future of the Christian community in the region. The signing ceremony took place in the Basilica of St Paul, Harissa Friday evening. Below the full text of the Holy Fathers’ address:

“I thank Patriarch Gregorios Laham for his words of welcome, and the Secretary-General of the Synod of Bishops, Archbishop Nikola Eterović, for his introduction. My warm greetings go to the Patriarchs, to all the Eastern and Latin Bishops assembled in this beautiful Cathedral of Saint Paul, and to the members of the Special Council of the Synod of Bishops for the Middle East. I am also gratified by the presence of the Orthodox, Muslim and Druze delegations, as well as those from the world of culture and from civil society. I greet with affection the beloved Greek Melkite community with gratitude for your welcome. Your presence makes my signing of the Post-Synodal Apostolic Exhortation Ecclesia in Medio Oriente all the more solemn; it testifies that this document, while addressed to the universal Church, has a particular importance for the entire Middle East.

Providentially, this event takes place on the Feast of the Exaltation of the Holy Cross, a celebration originating in the East in 335, following the dedication of the Basilica of the Resurrection built over Golgotha and our Lord’s tomb by the Emperor Constantine the Great, whom you venerate as saint. A month from now we will celebrate the seventeen-hundredth anniversary of the appearance to Constantine of the Chi-Rho, radiant in the symbolic night of his unbelief and accompanied by the words: “In this sign you will conquer!” Later, Constantine signed the Edict of Milan, and gave his name to Constantinople. It seems to me that the Post-Synodal Exhortation can be read and understood in the light of this Feast of the Exaltation of the Cross, and more particularly in the light of the Chi-Rho, the two first letters of the Greek word “Christos”. Reading it in this way leads to renewed appreciation of the identity of each baptized person and of the Church, and is at the same time a summons to witness in and through communion. Are not Christian communion and witness grounded in the Paschal Mystery, in the crucifixion, death and resurrection of Christ? Is it not there that they find their fulfilment? There is an inseparable bond between the cross and the resurrection which Christians must never forget. Without this bond, to exalt the cross would mean to justify suffering and death, seeing them merely as our inevitable fate. For Christians, to exalt the cross means to be united to the totality of God’s unconditional love for mankind. It means making an act of faith! To exalt the cross, against the backdrop of the resurrection, means to desire to experience and to show the totality of this love. It means making an act of love! To exalt the cross means to be a committed herald of fraternal and ecclesial communion, the source of authentic Christian witness. It means making an act of hope!

In examining the present situation of the Church in the Middle East, the Synod Fathers reflected on the joys and struggles, the fears and hopes of Christ’s disciples in these lands. In this way, the entire Church was able to hear the troubled cry and see the desperate faces of many men and women who experience grave human and material difficulties, who live amid powerful tensions in fear and uncertainty, who desire to follow Christ – the One who gives meaning to their existence – yet often find themselves prevented from doing so. That is why I wanted the First Letter of Saint Peter to serve as the framework of the document. At the same time, the Church was able to admire all that is beautiful and noble in the Churches in these lands. How can we fail to thank God at every moment for all of you (cf. 1 Th 1:2; Part One of the Post-Synodal Exhortation), dear Christians of the Middle East! How can we fail to praise him for your courage and faith? How can we fail to thank him for the flame of his infinite love which you continue to keep alive and burning in these places which were the first to welcome his incarnate Son? How can we fail to praise and thank him for your efforts to build ecclesial and fraternal communion, and for the human solidarity which you constantly show to all God’s children?

Ecclesia in Medio Oriente makes it possible to rethink the present in order to look to the future with the eyes of Christ. By its biblical and pastoral orientation, its invitation to deeper spiritual and ecclesiological reflection, its call for liturgical and catechetical renewal, and its summons to dialogue, the Exhortation points out a path for rediscovering what is essential: being a follower of Christ even in difficult and sometimes painful situations which may lead to the temptation to ignore or to forget the exaltation of the cross. It is here and now that we are called to celebrate the victory of love over hate, forgiveness over revenge, service over domination, humility over pride, and unity over division. In the light of today’s Feast, and in view of a fruitful application of the Exhortation, I urge all of you to fear not, to stand firm in truth and in purity of faith. This is the language of the cross, exalted and glorious! This is the “folly” of the cross: a folly capable of changing our sufferings into a declaration of love for God and mercy for our neighbour; a folly capable of transforming those who suffer because of their faith and identity into vessels of clay ready to be filled to overflowing by divine gifts more precious than gold (cf. 2 Cor 4:7-18). This is more than simply picturesque language: it is a pressing appeal to act concretely in a way which configures us ever more fully to Christ, in a way which helps the different Churches to reflect the beauty of the first community of believers (cf. Acts 2:41-47: Part Two of the Exhortation); in a way like that of the Emperor Constantine, who could bear witness and bring Christians forth from discrimination to enable them openly and freely to live their faith in Christ crucified, dead and risen for the salvation of all.

Ecclesia in Medio Oriente provides some elements that are helpful for a personal and communal examination of conscience, and an objective evaluation of the commitment and desire for holiness of each one of Christ’s disciples. The Exhortation shows openness to authentic interreligious dialogue based on faith in the one God, the Creator. It also seeks to contribute to an ecumenism full of human, spiritual and charitable fervour, in evangelical truth and love, drawing its strength from the commandment of the risen Lord: “Go therefore and make disciples of all nations, baptizing them in the name of the Father and of the Son and of the Holy Spirit, teaching them to observe all that I have commanded you. Behold, I am with you always, to the close of the age” (Mt 28:19-20).

The Exhortation as a whole is meant to help each of the Lord’s disciples to live fully and to pass on faithfully to others what he or she has become by Baptism: a child of light, sharing in God’s own light, a lamp newly lit amid the troubled darkness of this world, so that the light may shine in the darkness (cf. Jn 1:4f. and 2 Cor 4:1-6). The document seeks to help purify the faith from all that disfigures it, from everything that can obscure the splendour of Christ’s light. For communion is true fidelity to Christ, and Christian witness is the radiance of the paschal mystery which gives full meaning to the cross, exalted and glorious. As his followers, “we proclaim Christ crucified … the power of God and the wisdom of God” (1 Cor 1:23-24; cf. Part Three of the Exhortation).

“Fear not, little flock” (Lk 12:32) and remember the promise made to Constantine: “In this sign you will conquer!” Churches of the Middle East, fear not, for the Lord is truly with you, to the close of the age! Fear not, because the universal Church walks at your side and is humanly and spiritually close to you! It is with this hope and this word of encouragement to be active heralds of the faith by your communion and witness, that on Sunday I will entrust the Post-Synodal Exhortation Ecclesia in Medio Oriente to my venerable brother Patriarchs, Archbishops and Bishops, and to all priests, deacons, men and women religious, the seminarians and all the lay faithful. “Be of good cheer” (Jn 16:33)! Through the intercession of the Virgin Mary, the Theotókos, I invoke God’s abundant gifts upon all of you with great affection! God grant that all the peoples of the Middle East may live in peace, fraternity and religious freedom! May God bless all of you!

It must be some heavy-duty document. Is the document at the link? 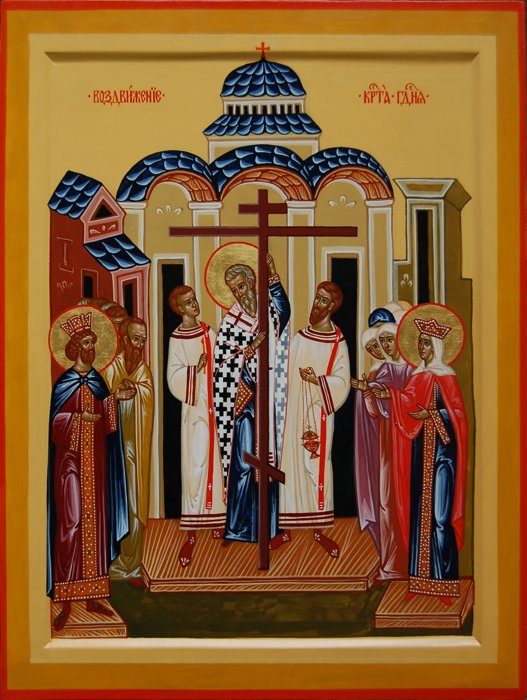