Listening To Mary’s Voice – Part 6 (The Wedding At Cana) 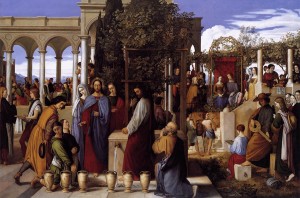 As I continue with Part of 6 of my 7-part series on Mary’s words in Scripture, the scene shifts to the wedding at Cana. Previously we’ve been looking at Mary’s words as recorded by Saint Luke, but now we’ll focus on Saint John’s writing. When the wine ran out at the wedding, Mary’s four words leave us with a powerful message. More importantly, it was her words that led to Jesus performing His first miracle!

Do you really think Jesus needed to be told of the wine shortage? Since He was omniscient, wouldn’t He already know? There must be a reason that Mary is featured so prominently in this story. In fact, her prominence can be seen at the very start of this story. In what seems like an oddity, Mary is actually listed BEFORE Jesus in the list of guests!

On the third day there was a wedding in Cana in Galilee, and the mother of Jesus was there. Jesus and his disciples were also invited to the wedding. (John 2:1-2)

St. John’s detail oriented nature leads us to believe that his ordering of guests is designed to call attention to Mary’s presence at the feast. He wants us to realize that she was present for a reason and that her actions and words are important. That said, why was she there and what could be the purpose of her pointing out the obvious?

An insight into the importance of Mary’s role can be derived by looking at the format of St. John’s Gospel. Immediately, one can observe a strong parallel with the Book of Genesis. Just as in Genesis, John’s Gospel starts with “in the beginning” (Jn 1:1). We then see a series of three “the next day’s” followed by the announcement of the wedding at Cana “on the 3rd day” (Jn 2:1). Some simple arithmetic allow us to deduce that the wedding feast took place on the seventh day, which calls to mind the end of the creation narrative referred to in the Book of Genesis. As our minds are focused on the first book of the Bible (most likely intentionally, as John didn’t include extraneous details), we can’t help but recall the story of the first woman (Eve) who led the first man (Adam) to sin by offering him the forbidden fruit (Gen 3:6). Interestingly enough, in the wedding at Cana, we see a strong parallel IN REVERSE! Unlike Eve, who led Adam to sin thus causing the gates of Heaven to be closed, we see Mary (sometimes referred to as the new Eve) leading Jesus (the new Adam) to perform His first miracle and inaugurate the NEW creation story. Jesus’ mission was to OPEN the gates of Heaven, previously locked by man’s disobedience. If the above parallels are not enough, the fact that Jesus called His mother “woman” (Jn 2:4), solidifies the comparison to Eve and the Book of Genesis.

Another thing that stands out is Mary’s awareness of the situation and her willingness to help. She was obviously paying attention to the happenings at the wedding and, by doing so, noticed the problem (quite possibly, even before the bride and groom). Once she saw that there was an issue, Mary didn’t try to solve it by herself or dispatch one of the disciples to obtain more wine. Instead, she went to Jesus and pointed out the problem. She didn’t demand anything, she didn’t give Him any extraneous details, she simply pointed out that the wine had run dry. In the same way, Mary is watching each of our lives and guess what happens when she notices a problem? You bet…she goes to her Son! In his only Marian encyclical, Blessed Pope John Paul II reflected on the importance of Mary’s role at Cana and in each of our lives:

At Cana in Galilee there is shown only one concrete aspect of human need, apparently a small one of little importance (“They have no wine”). But it has a symbolic value: this coming to the aid of human needs means, at the same time, bringing those needs within the radius of Christ’s messianic mission and salvific power. Thus there is a mediation: Mary places herself between her Son and mankind in the reality of their wants, needs and sufferings. She puts herself “in the middle,” that is to say she acts as a mediatrix not as an outsider, but in her position as mother. She knows that as such she can point out to her Son the needs of mankind, and in fact, she “has the right” to do so. Her mediation is thus in the nature of intercession: Mary “intercedes” for mankind. (Blessed Pope John Paul II, Redemptoris Mater)

Next week I’ll look at Mary’s final words in Sacred Scripture, “Do whatever He tells you” (Jn 2:5).

TOPICS: Apologetics; Catholic; History; Theology
KEYWORDS: blessedvirginmary; catholic
**mediation: Mary places herself between her Son and mankind in the reality of their wants, needs and sufferings.**

We can hear Jesus whispering under His breath: “How can I say ‘No’ to this Woman?”

“They have no wine.” Ping

Indeed. One of my favorite Bible stories.

Neither have I, and I could really use it! Maybe if I filled some pots with water ...

Mary’s last words in the Bible: “Do whatever he tells you.”

7 posted on 03/24/2012 5:15:07 PM PDT by COBOL2Java (Mitt Romney is SEVERELY conservative - and I'm SEVERELY against giving him my vote!)
[ Post Reply | Private Reply | To 1 | View Replies]
To: Salvation
Salvation, hi. Haven't seen your threads the last couple of weeks ~ been busy with son's new baby. We just spent most of the day with her.

So, the people have no wine?

That can be fixed of course ~ invite all to the table to have both Bread and Wine.