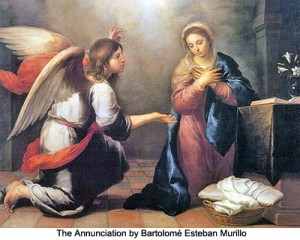 As we continue with Part 2 of a 7 Part series on Mary’s words in Scripture, I’ll be taking a look at a powerful statement made by Mary to the angel Gabriel.  Last time we focused on Mary’s question to the angel after learning that she had been chosen to be the mother of the Savior.  Having made a vow of virginity, Mary was confused as to how God’s will could be fulfilled.  She didn’t doubt that it could happen (unlike Zechariah, who flat out didn’t believe that his wife could become pregnant), she just wanted to know how it would happen so that she wouldn’t have to break her prior vow of virginity.  Mary sought to understand God’s will.  Gabriel answered her question by explaining that it would come about by the power of the Holy Spirit.  He also informed her that her elderly relative, Elizabeth, is now sixth months pregnant.  Then Gabriel gave Mary a great takeaway from their dialog when he stated that “nothing will be impossible for God” (Luke 1:37). Mary’s response to all of this news?

Because many of us are very familiar with Mary’s statement, we run the risk of overlooking how profound it actually is.  These eight words give us a great insight into Mary’s view of herself.  In this statement, she is saying to God, “I am your humble servant, use me in any way that you wish”.  Unlike many of us, she fully understood that she was merely a creature and that the Lord was her Master.  According to the dictionary, a handmaid is “a servant who serves a useful, but subordinate purpose”.  When Mary refers to herself as a “handmaid”, she is professing her humility.  Despite just having been told that she will be the vessel used to deliver the Savior to the world, Mary referred to herself as a servant.  This profession gives us a glimpse into Mary’s interior attitude and provides an example that is worthy of our emulation.  In his book “The Glories Of Mary”, St. Alphonsus Liguori stated that the first effect of humility is a lowly opinion of oneself.  Even though Mary was aware of her sinlessness, she understood that it was all due to God’s grace.  How important is humility?  St. Bernard of Clairvaux observed that “humility is the foundation and guardian of the virtues”.  More importantly, Jesus instructed us to “learn from me, for I am meek and humble of heart” (Mt 11:29).

Without humility, it is impossible for us to enter the Kingdom of Heaven.  Unfortunately, humility is also one of the most difficult virtues to acquire.  As evidence, look at how many times we question events that occur in our lives.  Why is God allowing this to happen to me?  We pray “Thy Will be done” and, at the same time, provide the Lord with a list of acceptable answers to our prayers.  Some even go as far as to disobey teachings of the Church because “they don’t agree with them.”  These positions are all incompatible with the virtue of humility and illustrate a serious misunderstanding of who’s the Creator and who’s the creature!  Although it can be a struggle, we can become more humble by asking for the Lord’s help through Mary’s intercession.  After all, who better to ask then someone who viewed herself as nothing more than the Lord’s servant?

“If you should ask me what are the ways of God, I would tell you that the first is humility, the second is humility, and the third is still humility.  Not that there are no other precepts to give, but if humility does not precede all that we do, our efforts are fruitless.” (St. Augustine)

TOPICS: Apologetics; Catholic; History; Theology
KEYWORDS: blessedvirginmary; catholic; magnificat
**Because many of us are very familiar with Mary’s statement, we run the risk of overlooking how profound it actually is. These eight words give us a great insight into Mary’s view of herself. In this statement, she is saying to God, “I am your humble servant, use me in any way that you wish”.**

Please follow the Guidelines of the Religion Moderator when posting on this thread.

Humility is a form of truth bump!

Humility is a form of truth bump!