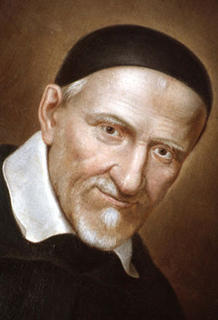 St. Vincent was born in Aquitaine and became a priest. He devoted his whole life to the service of the poor. He founded a congregation of priests for missionary work, groups of laymen to help paupers and galley-slaves, and, with St Louise de Marillac, the Sisters of Charity. He is the patron saint of hospital workers, charities, and volunteers.

A Meditation on the Poor

Even though the poor are often rough and unrefined, we must not judge them from external appearances nor from the mental gifts they seem to have received. On the contrary, if you consider the poor in the light of faith, then you will observe that they are taking the place of the Son of God who chose to be poor. Although in his passion he almost lost the appearance of a man and was considered a fool by the Gentiles and a stumbling block by the Jews, he showed them that his mission was to preach to the poor: "He sent me to preach the good news to the poor." We also ought to have this same spirit and imitate Christ's actions, that is, we must take care of the poor, console them, help them, support their cause.

Since Christ willed to be born poor, he chose for himself disciples who were poor. He made himself the servant of the poor and shared their poverty. He went so far as to say that he would consider every deed which either helps or harms the poor as done for or against himself. Since God surely loves the poor, he also loves those who love the poor. For when one person holds another dear, he also includes in his affection anyone who loves or serves the one he loves. That is why we hope that God will love us for the sake of the poor. So when we visit the poor and needy, we try to be understanding where they are concerned. We sympathize with them so fully that we can echo Paul's words: "I have become all things to all men." Therefore, we must try to be stirred by our neighbors' worries and distress.

It is our duty to prefer the service of the poor to everything else and to offer such service as quickly as possible. Charity is certainly greater than any rule. Moreover, all rules must lead to charity. With renewed devotion, then, we must serve the poor, especially outcasts and beggars. They have been given to us as our masters and patrons.

~ from the writings of St. Vincent de Paul 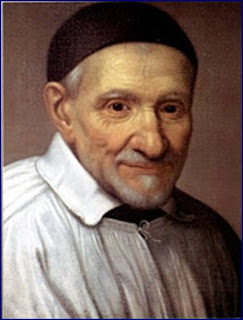 St. Vincent de Paul was a great apostle of charity, and brought a great revival of the priesthood in the 17th century. He was born near Dax in the Landes (France) in 1581. As a young priest he was captured by Moorish pirates who carried him to Africa. He was sold into slavery, but freed in 1607 when he converted his owner.
Having returned to France, he became successively a parish priest and chaplain to the galley-slaves. He founded a religious Congregation under the title of Priests of the Mission or Lazarists (now known as Vincentians), and he bound them by a special way to undertake the apostolic work of charity; he sent them to preach missions, especially to the ignorant peasants of that time, and to establish seminaries.
In order to help poor girls, invalids, and the insane, sick and unemployed, he and St. Louise de Marillac founded the Congregation of the Daughters of Charity, now better known as the Sisters of St. Vincent.
St. Vincent worked tirelessly to help those in need: the impoverished, the sick, the enslaved, the abandoned, the ignored. He died in 1660 at St. Lazarus's house, Paris. His motto: "God sees you."
"Let us love God; but at the price of our hands and sweat of our face."
Patron: charitable societies; horses; hospitals; leprosy; lost articles; prisoners; volunteers; spiritual help; Saint Vincent de Paul Societies; Vincentian Service Corps; Madagascar; diocese of Richmond, Virginia.
Symbols: 16th century cleric performing act of charity; priest surrounded by the Sisters of Charity; book with heart; model of an orphanage or hospital; model of a hospice; priest with child in his arms.

Also no derision of the poor.

The thing I find fascinating about the classical saints who were known for their solicitude of the poor, including St Vincent, is that they consistently pushed for personal involvement toward helping the poor.

I constantly wonder what a St Vincent or a St Basil would say about the pervasive government that we see throughout the “developed” world and the negative impact it is having upon the Church, society, and even the poor.