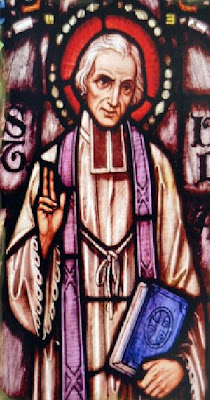 There’s nothing like a good story about Saint Jean-Marie Vianney to get those uplifting juices flowing again when you’re feeling as dry as the desert. The Holy Curé was so close to Jesus that when he said: “I can do no more,” it kind of takes you to the Crucifixion and the words of Jesus: “Consummatum est -- It is consummated.” Clearly the Curé d’Ars strived to let his light shine, the indwelling of the Most Holy Trinity to be manifested exteriorly, touching the lives of others. This great saint continually decreased while Jesus increased (cf. John 3:30).

One day when the Blessed Sacrament was exposed, Monsieur Vianney stood contemplating it with an ecstatic smile. One of his companions, surprising him in this attitude, turned his eyes instinctively towards the tabernacle as though he expected to see something. He saw nothing, but the expression on Monsieur Vianney’s face had struck him so much that he said: “I believe the time will come when the Curé of Ars will live only by the Eucharist.”

He was living by it already. The grace which flowed so abundantly from that Sacrament into his soul always protected him against sin, nourished in him the most magnificent virtues, and guided him without falling to the life of glory.

On Friday, July 29, 1859, having, as usual, spent sixteen or seventeen hours in the confessional, the Holy Curé came home worn out. He sank on to a chair, saying: “I can do no more.” Then he went to bed never to rise from it again. Fear of God’s judgments had been his dominate idea and despair his temptation; nevertheless, he was desirous of death, and looked forward to it with all his heart. “It is the union of the soul with the Sovereign Good,” he said. And he passed his last days in perfect serenity. “I should not have believed,” he delighted in repeating, “that it was so sweet to die.”

On the Tuesday evening he himself asked for the Sacraments. He wept at hearing the bell which announced that Jesus was leaving the tabernacle to come and visit him, and he wept afresh on seeing Him enter.

On Thursday, August 4, at two o’clock in the morning, he ceased to breathe, at the moment when the Abbé Monnin, who was saying the prayers for the commendation of the soul, pronounced these words: “May the holy angels of God come forth to meet him, and bring him into the city of the heavenly Jerusalem.” Indeed they brought him there: the Church has given us the certainty of it by the decree of canonization of 1925.

My gratitude to this great saint and patron of priests.

In the diocese of Philadelphia we have 8 relics traveling to 267 Parishes 40 High schools and 12 universities the Retired priest Homes and the Cloistered Nuns who pray for Vocations.

They spend one week in each parish and they get transferred each Thursday!

What a blessing that will be for the entire diocese.

Let us know in a year how many vocations there are!

The Priesthood and the Mass
Sermons of St. John Vianney - Cure of Ars » We are wretched creatures
Bishop Olmsted on the Devil and John Vianney
St. John Mary Vianney, the Curé d'Ars
Saint John MarIE Baptist Vianney, Cure of Ars (1786-1859)

HOMILY by St. Jean Baptiste Marie Vianney, the Curé of Ars CHARITY
St John Vianney, Patron of Parish Priests(1786-1859)[Cure of Ars]
News from the Apostolic Administration of St. John Vianney Fall 2002, Volume 1 - Number 1
The Cure Of Ars: Jean-Marie Vianney
“Oh, how great is a priest!" [The Curé d'Ars regarding bishops/priests)

In our small parish, we have a chalice that is taken by a different family each week to help them to focus on their prayers for vocations.

“Pray for Vocations” on it. Individuals and couples have taken it and now families are doing it.