A child crippled by a kidney tumour was able to walk again after praying at the tomb of Pope John Paul II on the eve of the fourth anniversary of the late pontiff's death, it was claimed last night.

The nine-year-old Polish boy was brought to St Peter's Basilica on a pilgrimage to the grave of the Polish pope who died on April 2 2005.

Last night Cardinal Stanislaw Dziwisz, the former private secretary of Pope John Paul, said that after praying at the tomb in the crypt of the Rome basilica he 'suddenly' started walking again.

'He was brought in a wheelchair because he wasn't able to walk,' the cardinal said. As soon as the boy emerged from the basilica, he told his parents: ''I want to walk.' He got up and started walking, healthy,' the prelate said.

He said the boy is from Gdansk, the Polish seaport known as the birthplace of the Solidarity movement which helped bring down decades of Communist rule in John Paul's homeland in the late 1980s.

If investigations reveal that there are no scientific explanations for the child's recovery, the healing may be put forward as the miracle needed to declare John Paul II 'blessed'. A second miracle will be required to declare him a saint.

Pope Benedict XVI marked the fourth anniversary of the death of Pope John Paul II with a memorial Mass yesterday and new prayers for his predecessor's beatification.

Benedict presided over an evening Mass at St. Peter's Basilica in which he recalled how beloved John Paul was, particularly among young Catholics.

'How many priestly vocations ... are linked to the testimony and preaching of my venerated predecessor!' Benedict said in urging young people to continue joining the priesthood and religious life. 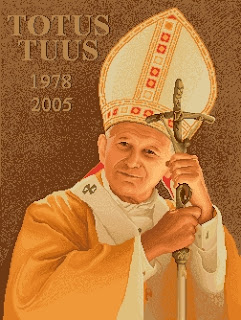 These are the types of events, that if properly documented and verified, are used in the process of canonizing a person for Sainthood.

5 posted on 04/03/2009 10:56:30 AM PDT by 2harddrive (...House a TOTAL Loss.....)
[ Post Reply | Private Reply | To 1 | View Replies]
To: 2harddrive
True. For those rolling their eyeballs, I would point out that before the Church accepts this as a miracle, they will investigate to see if the boy was truly unable to walk or simply weak, if his condition has been cured, or if he simply regained strength and walked through being encouraged.

Emotion sometimes plays into events like this, so the Vatican is very cautious about ascribing a miracle in this type of situation.

That's why, when they finally say an event is a miraculous one, I believe them.

More proof needed but My heart is filled with joy for this boy even as my head is skeptical. If miracles exist, and if John Pall II could do it—I bet he would help an unfortunate Polish boy. In so many ways John Paul II should be recognized as a saint.

I truly believe there are miracles, and I am sure this will be investigated fully. I also believe that a second miracle will be attributed to Pope John Paul, II. Throughout the world, even non-believers saw the light from his aura, felt the spirit of God with him, and knew they were experiencing a truly saintly man. I pray almost every night that JP II will be cannonized. His devotion to Mother Mary, I am sure, will ensure that. For myself, I feel he has never really left us.