One of the aspects that most people don’t even think about on a daily and weekly basis while attending Mass are the liturgical vestments of the priest and deacon. The chasuble and dalmatic are proper vestments to the order of priest and deacon respectively. Also, common to those ordained ministers is the stole, which in the case of the priest is placed over the shoulders and around the neck, for the deacon, the stole is draped diagonally from the left shoulder. For the most part their purpose today is just significant to identify which role the celebrants and assistants of the Sacraments are playing. In our Catholic parishes, most of the time, there is never an explanation of the significance of the stole; it is just taken for granted. However it is important to understand that the stole of priest, bishop and deacon is a symbol of the authority they possess as part of the sacrament of Holy Orders.The most recognizable vestment we encounter each Sunday is the chasuble. It is the main vestment of the priest while celebrating Mass. With the recent revival of the Mass of Blessed John XXIII, one most likely is unfamiliar with the style of vestment worn for this celebration. The chasuble and dalmatic and tunic worn by the priest, deacon and sub-deacon are called “Roman” vestments, and are the normal vestments worn for Mass. Their style and appearance is based upon clothing and ceremonial clothing that was worn in the Roman Empire, especially by the ruling aristocracy and important civil dignitaries. Roman vestments are usually ornately designed on the back, simply because the congregation sees the back of the priest while he is celebrating the Eucharistic Sacrifice.

With the advent of the Second Vatican Council and the practice of celebrating the liturgy ad populum, vestments that had their historical roots in “Gothic” countries became more common and prevalent. Gothic chasubles and dalmatics are cut fuller and are more like a garment that resembles a cape or our modern poncho. These are the vestments we are most used to seeing since the 1960’s. However both varieties can be worn for liturgical celebrations.

With this brief description made, my goal is to suggest that parishioners and priests alike pay particular attention to the quality of the materials and the detail to craftsmanship of all of these vestments. They are very visible signs and symbols of our efforts to praise God and to worship as a faithful community.

Very often, parishes are always getting various donations of vestments from different sources. For example, at times when an individual dies, the relatives and friend purchase a set of vestments for the parish. This is an extremely admirable practice. However it might be better for pastors and parishes to institute a specific “fund” in their parish that is designed for the procurement and designing of sacred liturgical vestments and instruments. If a parish “fund” were established, pastors and priests would no longer be surprised and shocked with the gift that a parishioner has made. Just like Christmas morning, even our parish priest’s open gifts that they would like to hastily return! If indeed, a specific fund were set up for sacred materials, then the pastor in conjunction with the parish liturgical committee could research artisans that provide liturgical vestments. To commission vestments so to speak for a parish should always be something that the parish can afford and should accomplish on a regular basis. Vestments are not just accessories for ordained ministers, they are essential to the fulfillment of their sacred obligations. Just like other professions, the necessary tools and instruments should be part of a professional’s daily wardrobe and routine.

The commissioning of sacred vestments for a parish is something that is starting to occur on a more regular basis. Craftsmen and artisans that work in the fabric arts are quite happy to provide their services and help parishes design visually attractive and materially qualitative vestments for use during the Sacred liturgy.

For the most part, designing and having liturgical vestments made to order is like having a new suit made especially for an individual. The fabrics are chosen, the style of vestment is determined, the color and even the quantity of vestments to be made. When a parish looks to add tailored vestments to its liturgical closet, they need to remember concelebrants and large groups of priests that sometimes join a parish in a special celebration. Multiple sets of vestments lend a distinctive harmony and consistent visual appeal to everyone during the Liturgy. It makes sense to balance all of the aspects of the liturgy, so that the visual and the spoken and the musical aspects of the Mass all come together for one significant event of worship and praise.

Once again it is always a question of providing “quality” resources in our parishes for all of our sacred celebrations. In a technological age, when most everything we use on a daily basis are mass produced…it is a nice change to experience something that is uniquely and individually made for our parish community. Our celebration of the liturgy expresses our communal appreciation and communal expressions of our most sacred sentiments. We utilize our liturgical vestments as an instrument to convey our sense of sacredness and holiness during our rituals. As Catholics we need to be ever mindful of the assent of our spiritual expectations to our heavenly Father. Our sacred vestments not only help us to focus on the spiritual actions that are taking place at our Liturgies, they enhance our abilities to actively appreciate the rituals and symbols of our ancient Catholic liturgy that occur in the transubstantiation of bread and wine, into the Body and Blood of Christ.

Interesting article and photos. Thanks, NYer. 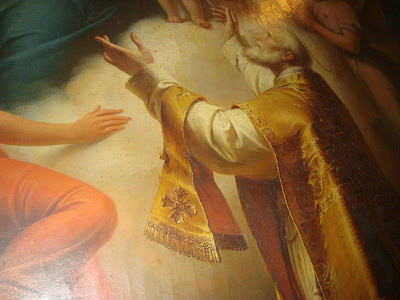 Most of these picture portray bishops — that is other than the contemporary sample.

Not a valid comparison in my judgment.