A forensic archaeologist has raised fresh questions over why no remains were found in the grave of an English cardinal in line to become a saint.

It comes just days before artefacts owned by Cardinal John Henry Newman go on display ahead of his possible beatification.

Tens of thousands of mourners lined the streets of Birmingham in 1890 as Cardinal John Henry Newman's body was carried eight miles to its final resting place.

Some 118 years later the Vatican ordered his remains be dug up.

Roman Catholic leaders in Birmingham were asked to exhume his body by the Vatican as part of the process which could lead to the cardinal's beatification.

The Vatican is investigating claims of a miracle attributed to him.

But when Church officials opened his grave, they found no skeleton.

They said it was "unsurprising" the remains had decomposed leaving only a few relics, including brass fittings.

These, along with some of the cardinal's former possessions already held by the Church, will be placed on show in a glass-side casket in Birmingham Oratory on Friday and Saturday, ahead of a mass on Sunday.

But a leading forensic archaeologist, with 20 years of experience excavating graves, has raised new questions over the disappearance of Newman's remains.

Professor John Hunter, from the University of Birmingham, tested soil samples from close to the grave site in Rednal, Worcestershire.

He said the soil would not, in normal circumstances, have led to the complete decomposition of Newman's skeletal remains.

"It would be, in my opinion, extremely difficult to explain the absence of skeletal material if this is the same soil as that of Newman's grave," Professor Hunter said. 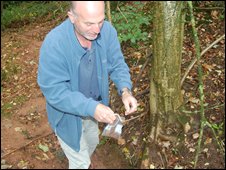 Professor Hunter has tested soil samples near to Newman's grave

He said soil needed to be highly acidic with a lot of ground water washing through it in order for a body to fully decompose in about 100 years.

The soil has been so disturbed in Britain over thousands of years that a site 100 feet away from Newman's grave (or even 50 feet away) may have completely different soil.

Not at all surprising that his bones have completely decomposed. The coffin was essentially gone as well. I saw photos of the brass coffin plate, and even it was in very, very bad shape.

Some conspiracy theorists having a field day. Do they think Charles Kingsley stole Cdl. Newman's body?

I thought the media’s obvious conclusion would be that the bishop had no bones to begin with!

But wouldn’t there be something left that would indicate that the remains were in fact there and decomposed? It’s not like it would be exactly wiped down with Windex and leave no clues. I watch too much CSI.

5 posted on 11/03/2008 8:46:29 AM PST by SaintDismas (Starting to regret the handle I chose for this forum)
[ Post Reply | Private Reply | To 1 | View Replies]
To: wequalswinner
The coffin had collapsed, so you're dealing with an area that's full of graveyard dirt. And English graveyards are used over and over again (remember the gravedigger in Hamlet) so there's plenty of decomposed remains around, but not necessarily Cdl Newman's . . . and nobody's got any DNA!

Much ado about nothing in my opinion. We talked about this awhile back when they first opened the grave, and in certain soils in Britain all that's left of the corpse is a stain on the surrounding earth.

Assumed bodily into Heaven like Our Lady, Elijah and Enoch?

Burke and Hare were a little before his death but who knows.