ROME, JUNE 2, 2006 (Zenit.org).- A small book of unpublished writings by Fatima visionary Sister Lucia will soon be published in Italy.

The 64-page volume, entitled "The Message of Fatima," focuses on the message of Our Lady of Fatima in relation to events that have taken place.

The young Lucia dos Santos witnessed the apparitions of Our Lady of Fatima that began on May 13, 1917, along with Francisco Marto and Jacinta Marto. Sister Lucia died at age 97 in February 2005.

For 45 years, the Holy See did not reveal the content of the so-called third secret of Fatima, while Sister Lucia lived in religious silence.

The unpublished text has been edited by the Carmel of Coimbra, Portugal, and issued by the Little Shepherds' Secretariat.

In the introduction, Father Geremia Carlo Vechina, Sister Lucia's confessor, reveals that the visionary had already worked on the editing of the writings, at the request of the then general superior of the order, the future Cardinal Anastasio Alberto Ballestrero, on the occasion of his visit to Coimbra in 1955.

That work was sent to Rome by order of Pope Paul VI, but "it remained forgotten in the Vatican Archives," noted Father Vechina.

In the essay, Sister Lucia says that on May 15, 1982, she received an invitation from Father Vechina, then provincial of the Order of Discalced Carmelites, "to write all the details that refer to the message of Fatima, from the beginning."

The visionary said she remained skeptical, fearful that she didn't have the authorization of the Holy See to write on such questions.

Her doubts vanished when she had the opportunity to speak with Cardinal Eduardo Pironio, then prefect of the Vatican Congregation for Religious, during his visit to the community on Sept. 9, 1983.

In the first part of the book, Sister Lucia wonders why the Lord chose "such poor and ignorant children" for carrying out his plans. She goes on to explain that the Lord "wants pure hearts to act in them as he wishes," as written in the Gospel: "Blessed are the pure of heart, for they shall see God."

Sister Lucia then addresses all the instances of meetings with the Virgin, the requests to pray the rosary, respect for the Commandments, the mysteries of the Most Holy Trinity, the practice of the Eucharist and above all the Christian meaning of suffering.

"The Lady," she writes, invited the little shepherds to "offer to God" and "to endure all the sufferings he wills to send you, as an act of reparation for the sins with which he is offended, and of supplication for the conversion of sinners."

The visionary recounts that the little shepherds, "not worried about the sufferings the Lord might send them, gave themselves totally to the will of God and, without knowing it -- as they did not know the Scriptures -- responded like Christ, when he said: 'Here I am Father, I have come to do your will.'"

Further on, Sister Lucia recounts unpublished details, as when, referring to World War I, Mary said: "The war is about to end but if mankind does not cease to offend God, a worse one will begin during Pius XI's pontificate."

The visionary explained that history witnessed "the outbreak of an atheist war against the faith, against God and against the People of God. A war that sought to exterminate Judaism from which Jesus Christ, the Virgin and the Apostles came, who transmitted to us the Word of God and the gift of faith, hope and charity, a people chosen by God, chosen from the beginning: 'salvation comes from the Jews.'"

The religious then wrote about Communist Russia and the wars promoted in the world due of the errors spread by Russia.

Sister Lucia recalls the Blessed Virgin's request for the "consecration of Russia to the Immaculate Heart."

"If you listen to my request" -- the Lady said to Sister Lucia -- "Russia will be converted and there will be peace. If you do not, she will spread her errors in the world, causing wars and persecutions against the Church. The good will be martyred, the Holy Father will suffer much and several nations will be destroyed."

After all this, however, the Lady told the little shepherds: "The Holy Father will consecrate Russia to me, which will be converted and a time of peace will be granted to the world. In the end, my Immaculate Heart will triumph."

This part of the Lady's message is explained by Sister Lucia with the consecration of Russia to the Immaculate Heart of Mary, which Pope John Paul II carried out in Rome on March 25, 1984.

In Italy, the book, being issued by St. Clement Publications, goes on sale June 10. The book will eventually be published in other languages. 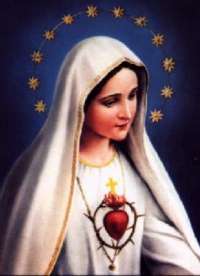 good news. I have her other books and highly recommend them.

nice article from the Weekly Standard:

HERE'S A CURIOUS THOUGHT. Maybe the single most important person in the 20th century's long struggle against communism wasn't Ronald Reagan. Maybe it wasn't Karol Wojtyla or Margaret Thatcher, Lech Walesa or Václav Havel, Aleksandr Solzhenitsyn or Mikhail Gorbachev. Maybe it wasn't anyone whose name might leap to a cold warrior's mind--for the most important figure in that long, dark struggle might have been a 10-year-old girl named Lucia dos Santos. .....

A good article. Thanks for the link.

8 posted on 06/02/2006 8:05:20 PM PDT by dominic flandry
[ Post Reply | Private Reply | To 6 | View Replies]
To: NYer
The visionary explained that history witnessed "the outbreak of an atheist war against the faith, against God and against the People of God. A war that sought to exterminate Judaism from which Jesus Christ, the Virgin and the Apostles came, who transmitted to us the Word of God and the gift of faith, hope and charity, a people chosen by God, chosen from the beginning: 'salvation comes from the Jews.'"

9 posted on 06/02/2006 8:37:35 PM PDT by bourbon (cliche' wasted & hate taste tested)
[ Post Reply | Private Reply | To 1 | View Replies]
To: bourbon
The similarities between this statement and the Holy Father's statements at Auchswitz are quite remarkable.

A bit too remarkable, wouldn't you say? The message of Fatima has been revised several times - for instance documents written in the 1930s added a great deal of anti-Communist content, as that was during the Spanish Civil War. It is interesting that post-Holocaust a Jewish interpretation appears. But nothing was said about this originally.