He never succeeded at winning over his critics. Some called him bombastic, others a war-monger.

He warned about terrorism, but few listened.

He warned about a foreign ogre, but few seemed to care.

He talked of not confronting the enemy and about the dangers of kowtowing to the enemy. An enemy that would sooner rip out your heart than let you even think he had one of his own.

Sorry there have been no Cavuto posts from me for awhile. I've not been able to post due to a puppy with a broken leg, but she will all better and I am back.
3 posted on 09/25/2003 6:09:32 AM PDT by abnegation (A closed mouth gathers no feet.)
[ Post Reply | Private Reply | To 1 | View Replies]
To: abnegation
Oh, thanks so much for the Cavuto post! He's been one of my favorites for some time now.

History will also show that as soon as Hitler was defeated the voters kicked his arse out in favor of socialism.

The same thing happened here in '92. After Saddam was defeated, the voters kicked Bush 41 out in favor of socialism.

9 posted on 09/25/2003 6:17:25 AM PDT by Consort
[ Post Reply | Private Reply | To 5 | View Replies]
To: abnegation
The man who originally took on terror, would later be thrown out of office by the very people who rallied around him because of terror.
No, I'm not talking about a president named Bush. I'm talking about a prime minister named Winston Churchill.

Winston Churchill was tossed out of office by the Brits shortly after WWII ended ... 1947 if my memory serves me correctly. However, it wasn't many years later (in the mid- 50's) when the Brits began to recognize him for the great wartime leader he was and re-elected him Prime Minister. Churchill got a well deserved second chance, Bush won't.

Iraq is just one theater of operations, not the entire war. I think Cavuto may have been referring to the entire war on terror not, as you seem to be implying, just the battle in Iraq.
12 posted on 09/25/2003 6:26:48 AM PDT by manna
[ Post Reply | Private Reply | To 11 | View Replies]
To: abnegation
Difference is, in this case the ogre had already attacked when Bush rallied a response--and the al Quaeda threat is not susceptible to final conquest in 3 years. It won't go with a bang but with a whimper. Even after Afghanistan and Iraq, the Axis of Evil is still in business.

It's like having an election after the fall of Italy but with the Nazis and the Japanese still very much in business.

It's not like political parties never changed any other positions, of course--

--but has anyone else noticed that the Democratic Party has switched from internationalism to pacifism and de facto isolationism?
13 posted on 09/25/2003 6:27:44 AM PDT by conservatism_IS_compassion (The everyday blessings of God are great--they just don't make "good copy.")
[ Post Reply | Private Reply | To 1 | View Replies]
To: abnegation; Hostage
Can you ping me to your Cavuto posts? Thanks for this posting, and I'm hoping your pup recovers soon from his broken leg.

Have you ever seen the movie, Ship of Fools?

The first volume discusses, among other things, the Italian invasion and conquest of Abyssinia.

Both bodies apparently studiously avoided taking any actions which could have possibly been effective in preventing each subsequent conflict. 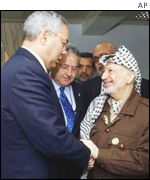 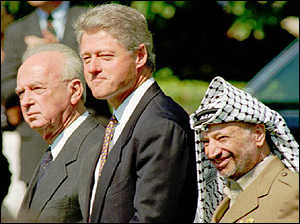 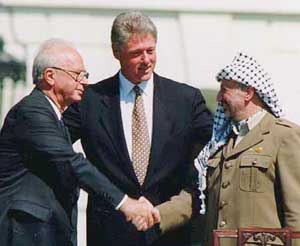 That sounds like a reference to Iraq, to me. No matter. Use whatever words you want: size, scope, strategy, tactics. This is different.

Cavuto's attempt to liken Bush to Churchill, like the wrong and overused attempts to liken Saddam to Hitler, are simply emotional manipulation with no basis in fact.