The antiwar grouches, naysayers and quagmirists in the mainstream media were so, so sure there would be no jubilation at the Iraqi liberation.

When Vice President Dick Cheney promised on NBC's "Meet the Press" that "We will be greeted as liberators," Newsweek's anonymous "Conventional Wisdom" column writers sneered that Cheney's remark was "An arrogant blunder for the ages."

In an article headlined "Panic in the White House," writer Andrew Stephen of the New Statesman sniped: "And they thought it was going to be so easy. They really did believe it: that troops would be welcomed in Iraq, with flowers and hugs and kisses, as liberators for whom they had been waiting so long."

Quentin Peel of the Financial Times added gloomily: "The danger for Mr. Bush is that he will win the war, eventually and unpleasantly, but he will never be seen as a liberator."

Nicholas D. Kristof of the New York Times opined: "(I)f this isn't Vietnam, neither is it the Afghanistan campaign, where Americans were hailed as liberators. I was in Afghanistan during that war, and the difference is manifest. Afghans were giddy and jubilant, while Iraqis now are typically sullen and distrustful and thirsty."

And while co-hosting ABC's "Good Morning America," Diane Sawyer derided: "What happened to the flowers expected to be tossed the way of the Americans? Was it a terrible miscalculation?"

This week, as all the world has now seen, the flowers were in full bloom. Jubilation rocked the streets. Coalition troops were showered with petals, kisses and hugs from Basra in the south to central Baghdad to the northern-most cities of Iraq. Here are just a few of the captions that accompanied the tender and telling photos taken across the liberated country:

"An Iraqi girl waves an American flag to U.S. Marines of the 15th Expeditionary Unit at the Marines Battalion Combat Operation Center in Nasiriyah, southern Iraq."

"U.S. Army Spc. John Dresel from Oxford, Conn., is kissed by an Iraqi child in Baghdad. The soldiers from the A Company 3rd Battalion, 7th Infantry Regiment took over a section of northern Baghdad with a warm welcome from many residents . . . "

"A Kurd kisses a picture of United States President George W. Bush during celebrations in the streets of Sulaymaniyah, northern Iraq . . . "

"Lance Corp. Shawn Hicks of Arizona gets a kiss Wednesday from an Iraqi man as they celebrate the arrival of American troops in central Baghdad."

"Two U.S. special forces soldiers are seen atop their jeep, front, as Kurdish fighters pose for a group picture with flowers received from the Kurdish Students Union, near the town of Dibagan . . . in northern Iraq. The students' union presented them with flowers in gratitude for their war efforts."

"Samantha Sheppard, 28, from Plymouth in Britain, a soldier with the 2nd Light Tank Regiment, smiles as she receives a flower from an Iraqi man during a patrol on the streets of east Basra, southern Iraq."

No flowers for you, Diane.

These buoyant pictures of liberation are worth a thousand of the quagmirists' dreary words. But even as Baghdad crumbled and Iraqis rejoiced in the streets, the pockets of liberal media resistance persist.

ABC's Peter Jennings grumbled that the mass of Iraqi citizens gathered in Baghdad to cheer the toppling of a Saddam Hussein statue was "a small crowd." (A phrase better applied to the dwindling audience for Jennings' phenomenally biased nightly news broadcasts.) The Los Angeles Times, meanwhile, downplayed the dancing in the streets, and instead amplified the seething resentment of the Arab media establishment -- citing Saddam's apologists at the Arab News and Egypt's Al Wafd newspaper -- to prove that "many see occupation, not liberation, of Iraq." 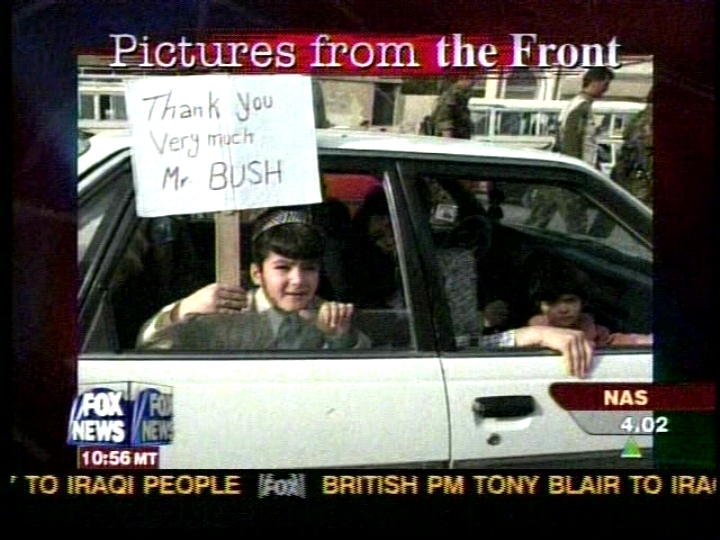 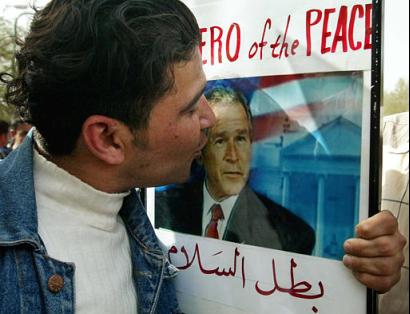 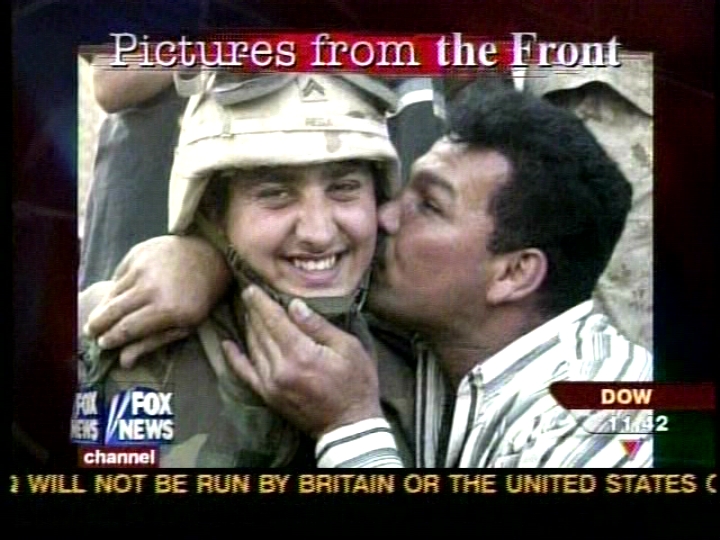 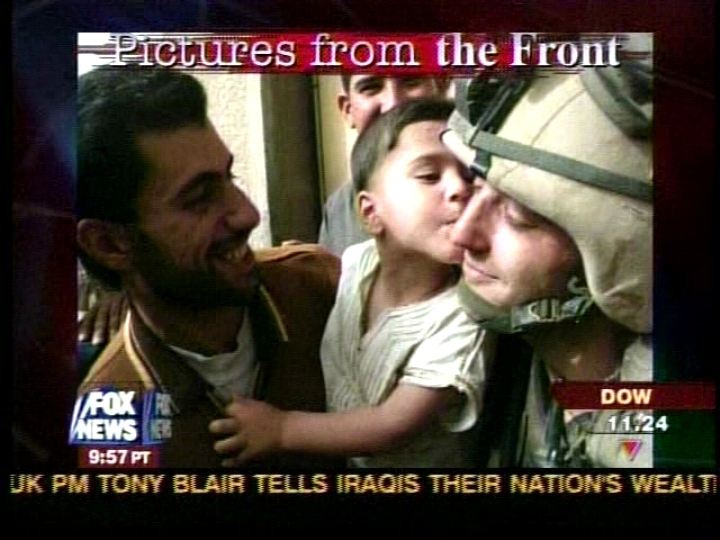 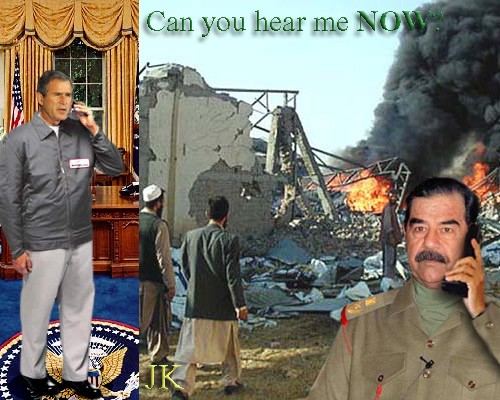 I've already heard this. Oh, and they're also bandying the word "divisive" about.

Well, guess what--we are divided: the true Free People from the weasly, whining, elitist freeloaders. And I, for one, am glad to see this demarcation made so obvious and inescapable. Maybe they can all just move to Germany and France.