The Bush administration has concluded the U.S.-led "decapitation" attack failed to take out Saddam Hussein, but an Iraqi opposition leader claims a higher authority already got the job done.

Moslem al-Asadi, a doctor living in exile in Iran, said he believes the real Saddam died in 1999 from cancer.

"The real Saddam died because he had cancer of the lymph nodes, and since his death in 1999 they're just showing his doubles," he told the Italian newspaper Corriere della Sera.

The absence of live messages by the Iraqi leader since coalition airstrikes crushed the residential compound, in which he was believed to be with his sons, has fueled speculation of his demise.

Hours after the initial attack, Saddam appeared on state-run television, wearing a beret and his reading glasses, and read from a prepared text urging Iraqis to resist the invaders and draw their swords.

But U.S. and British intelligence suspected the footage was prerecorded prior to the attacks.

As WorldNetDaily reported, British intelligence in Cheltenham intercepted an urgent call Saturday suggesting that Saddam is still alive in a secret hideaway in Baghdad but required medical intervention the Iraqis could not provide.

"They said he was not critically injured but demanded urgent treatment because he had lost blood and could get worse. This regime wouldn't go to that trouble for anybody else – including members of his family," an official told the British daily The Sun.

He referred to his "brave and heroic people" and referenced commanders and their locations, including the port of Umm Qasr, taken by coalition forces amid stiff Iraqi resistance.

Despite the reference to Umm Qasr, British intelligence thought the broadcast may have been prerecorded.

"We are well aware that he spent many hours recently tape-recording various messages. We have to do a little more analysis of what he was actually saying to see whether or not that in fact was Saddam Hussein," British Defense Minister Geoff Hoon told reporters.

"I think there are some doubts about whether that tape is canned or whether it's fresh and based on recent events. It would not be a surprise if Saddam Hussein had some time ago put in the can numerous statements designed to be released later," he said.

But the Washington Post reported that because Hussein seemed assured and so much his old self, dressed in a military uniform, the CIA decided it didn't have to analyze the voice to confirm his identity, and senior Bush administration officials believe the message was taped after Thursday's attack.

"The voice is easy to simulate and doubles constantly study video and audio records," argued al-Asadi.

The exile maintains the footage purported to be Saddam Hussein provides the evidence to support his claim that look-alikes are all that remains of the dictator.

Longtime bodyguard Saddam Michael Ramadan in 1979 wrote in the book "In Saddam's shadow" that the Iraqi leader was so ill he was dependent on pain killers, according to the newspaper. Ramadan is reportedly now under the protection of the CIA.

The paper quotes another former bodyguard, who fled Iraq for Israel two months ago as declaring, "Saddam whom you now see, was photographed some years ago."

SOS to Moscow to save Saddam?

I wonder if we play the tape backwards what it will say??? :o

Lymph Cancer would have put him out of commission a long time ago....hmmmmm......

Don't forget, Iraq is a family run operation and the widow(s) and kids have a lot at stake - their lives!!

So it was Dan Rather’s double interviewing Saddams double!

But who ever believed THIS was Saddam will believe anything.

If our CIA and intel said this guy was Saddam they need glasses, and uhhh Saddam took 20 lbs. off between appearances of days. 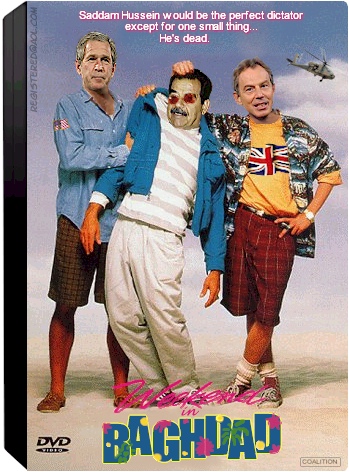 My name is Inigo Montoya. You killed my father. Prepare to die!