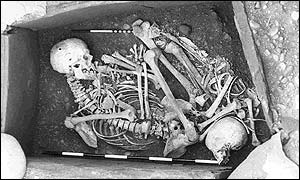 The bones were found in East Lothian

Leprosy may have arrived in Britain 1,500 years earlier than first thought, according to evidence taken from an ancient grave in Scotland. The evidence was taken from bones which were found near Dunbar in East Lothian and which belonged to a child who lived 3,500 years ago.

This find may be one of the earliest cases of leprosy in the world so far identified.

She said: "Although the diagnosis of leprosy cannot be confirmed until DNA tests are complete, the indications that this is leprosy are quite promising.

"Most experts agree that the westward spread of the disease came from the Mediterranean where it is believed to have been introduced by the army of Alexander the Great on returning from India.

"This contagious disease is then thought to have come to Britain with the expansion of the Roman Empire."

Ms Roberts said: "This would predate the previously accepted arrival of leprosy in Britain by up to 1,500 years.

An anthropologist at Glasgow University made the diagnosis

"If this is the case, then leprosy took some other, unknown, route through Europe's early societies."

Fourteen skeletons from the Bronze and Iron Ages were excavated at the ancient burial site in 1980.

Re-examination of the pre-historic bones has only recently thrown up the new findings.

The child's bones were buried with those of a man, suggesting the child had died some time before the male.

Further tests may reveal whether they were related.

Rod McCullagh, principal inspector of ancient monuments with Historic Scotland, said the child appeared to have been the focus of a complex burial ritual.

He said: "Not only is this a fascinating glimpse into Scotland's distant past, but this find may also be one of the earliest cases of leprosy in the world so far identified."

The last indigenous case of leprosy recorded in Britain was in the Shetland Isles in 1798.

The disease, caused by a germ which attacks the nerves of the hands, feet and face, still exists in parts of the developing world.

Did any of the skeletons have a white gold ring?

No mention of a ring.

Did we ever see a final report after the DNA tests were done?

There are a number of "outside villages" in Viet Nam where these folks live. They are pushed out of their home villages and spouses and children go with them.

I was reaching for a copy of the report, but my arm fell off.

I hate it when that happens!