The move came after Democrat Minority Leader Hakeem Jeffries had called his bluff by naming them despite GOP threats.

McCarthy made him regret it in less than an hour - and then delivered a beatdown to both the disgraced Democrat Reps, and a media lapdog who tried (in vain) to actually defend them.

“I am committed to returning the House Intel Committee to one of genuine honesty and credibility that regains the trust of the American people,” McCarthy said. 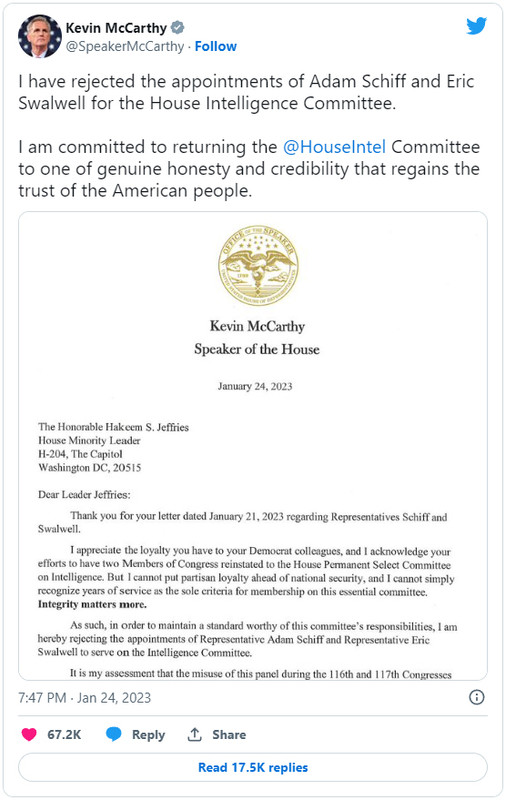 Both Schiff and Swalwell should be permanently banned from ever accessing classified information.

Adam Schiff is a serial liar and abused his position as House Intel Chairman to protect Democrats and Hunter Biden.

Eric Swalwell had a sexual relationship with Chinese spy and honeypot Fang Fang.

McCarthy went off on Schiff to left-wing reporters Tuesday evening after he removed the serial liar from the House Intel Committee.

Even critics of McCarthy, who thought he would be too soft in the job, were amazed by his fierce attack of the two Democrats - and the arrogant reporter.

What’s he gonna do about those two RINO wenches?

McCarthy may have stones after all. Pray that is the case.

Reading the comments at the link, one made a valid comment...

The gop winning with a slim majority may have been a blessing in disguise.

He did the right thing.

I’m sending a letter to him tomorrow backing this action.

He did very well.

True, but at least in this case he is backing it with an action (denying committee membership).

Related, Schiff is a strange bird IMHO. His behavior and demeanor are not what I consider normal.

Both of them are whining vociferously on Twitter and being rightly ridiculed. It’s great entertainment for the whole family.

He’d better put the screws to those two RINO bitches and keep Omar off of the Foreign Affairs Committee.

The reporterett had no idea what national security meant or why anyone should be concerned.

Its a clone, AI or some Constitutionalist has film of McCarthy humping a goat and is black mailing him.

Shif can lie all day without blinking. Like a robot lemur.

Glad to see McCarthy taking it to the Left. I’d be very happy
to have been wrong about him.

I have some reasons for not trusting him any further than I
can drop kick him, but his fate is in his own hands, and I
hope he does a good job.

If he does, I’ll be more than happy to praise him for it.

Who is This Kevin McCarthy, and Where Did He Come From?

Who is this imposter? 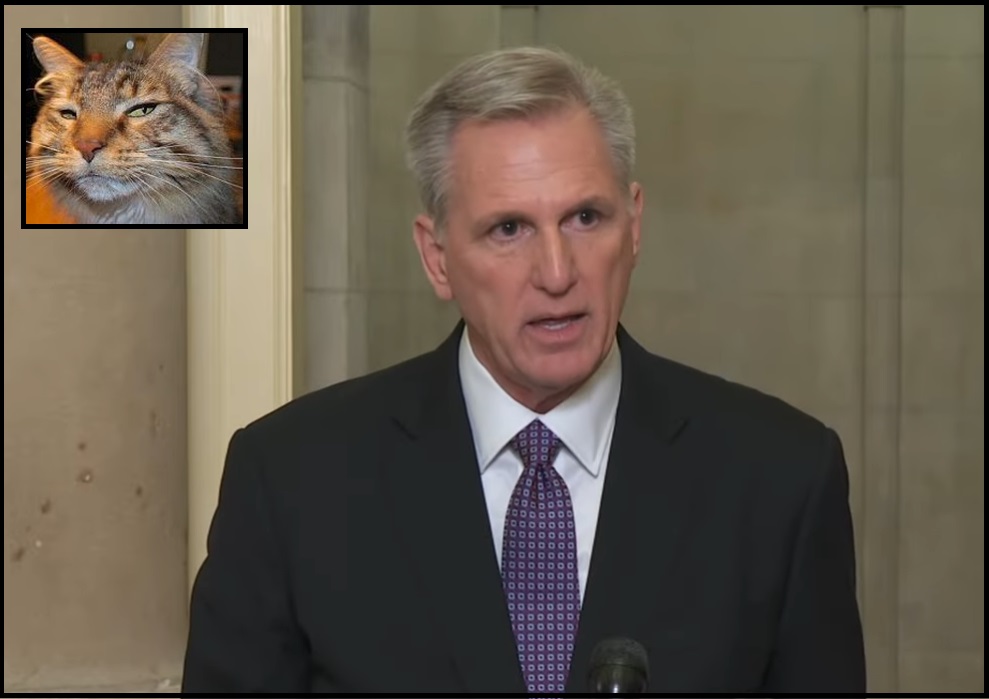 Just watch, and stay with it:

"Let me be very clear and respectful to you. You ask me a question, when I answer it it's the answer to your question. You don't get to determine whether I answer a question or not, okay? In all respect...what happens in the Intel Committee you don't know."