And Another: Shanghai-Based Property Developer Crashes 87% In Minutes Before It Is Halted [Not Just the Evergrande Group]
ZUBU Brothers: Market Knowledge Services ^ | 09/20/2021 | Tyler Durden

It's not just Evergrande that is about to keel over. Overnight, one of its smaller peers, Shanghai-based Sinic Holdings Group which focuses on the development of residential and commercial properties in China, was halted trading after it shares cratered in a freak 87% plunge on Monday afternoon. The plunge slashed the market value to just under $230 million, which is laughable for a listed developer in the city.

There was no reason for the selloff - an officer at the firm’s Hong Kong office said there’s no one to attend to media inquires which is probably not a good sign - which was attributed to the general panic resulting from Evergrande's imminent default, nor did the company give a reason for the trading halt in Hong Kong.

One thing was clear: selling volumes were off the chart, and as Bloomberg observes, the sudden selloff in the last two hours leading up to the suspension was accompanied by a surge in trading volume that was about 14 times its average in the past year. The liquidation may have been a margin call on a core shareholder who was forced to hit any bid, but we probably won't know for a few days. 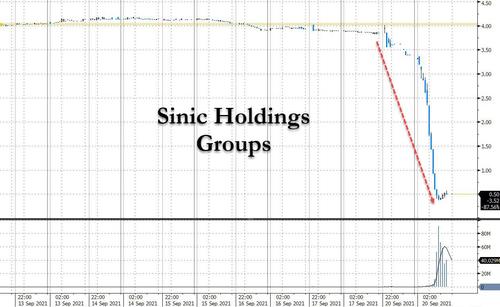 Unlike Evergrande, Sinic is not faced with an imminent default, but it does have a 9.5% $246 million bond due on Oct. 18 and Fitch Ratings revised its outlook to negative last week.

"It’s the same story as everywhere else -- investors are concerned about the liquidity," said Philip Tse, director and head of Hong Kong and China property research at Bocom International Holdings Co Ltd. “I think there are most likely some margin calls on some of the major shareholders” by looking at Sinic’s stock price pattern this afternoon.

The crash came as Hong Kong’s property gauge plunged the most since May 2020 amid growing investor angst about China’s real estate crackdown and worries that Beijing may tighten grip on the city’s property sector in its “Common Prosperity” campaign. As discussed extensively last night, risk-off sentiment in financial markets exploded on Monday, with contagion from Evergrande spooking global markets, and as Chinese junk bond yields have soared to the highest level since 2011. 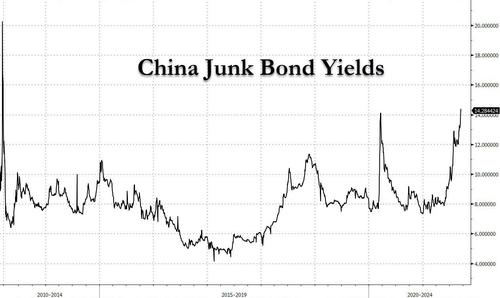 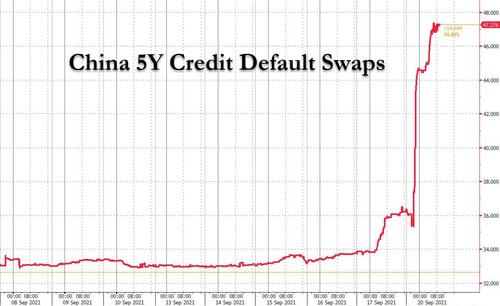 China will have to get ahead of this by bailing out Billions in cash.

They will do so by going into debt, or sell more US securities or a combination of both (most likely since China doesn’t have the same credit a Western nation has).

The biggest - and ultimate-est - contagion is that of China's sovereign risk itself... and that is starting to blow out... 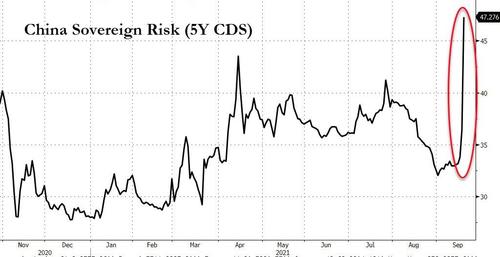 This sudden surge in default risk on China's sovereign debt is very significant in the context of China's constant reassurance to the rest of the world that it is solid-as-a-rock (just as Larry fink, but don't ask George Soros). However, we do note that China CDS spiked to around 90bps in March 2020 (as the COVID crisis hit) and around 150bps in early 2016 (accelerating after China devalued the yuan in late 2015).

The question is, of course, where will this stop this time? How much 'risk' is China willing to take with its sovereign risk?

Someone did a nekkid short to destroy the company and enrich themselves at the same time?

You won’t find any “Common Prosperity” campaign in the UK or USA.

Phase II of the great reset.

“The crash came as Hong Kong’s property gauge plunged the most since May 2020 amid growing investor angst about China’s real estate crackdown and worries that Beijing may tighten grip on the city’s property sector in its “Common Prosperity” campaign.”

It’s like Trump recently said. “Everything the Left touches turns to shit”

What is the CalPERS exposure in China?

If it was Soros, I have no doubt the China will assassinate him in revenge. And his son. To send a message.

Will they ?? I’m not sure, let me offer another possibility.

Recently China supposedly cracked down a number of companies that had either gone public on the NYSE or were about to go public. what was the result of that, especially for the companies that had already gone public, the equity holders of those companies already collected their billions primarily from Pension funds in the USA, who took some major loses...

China will bail out their citizens who invested in these Property Development companies to keep them from rioting, but any foreign investors will get screwed, what is the result of that, unrest and chaos in Western Economies and who does that help ???

IMO, China allowed these companies to borrow recklessly sucking in capital from all over the world, building all kinds of properties in China and then folded them screwing Western Investors in process....

It’s interesting right in the middle of a Chinese Created pandemic when Western Economies are in real trouble, China starts to experience debt problems, especially when a lot of that debt is held by Western Economies....coincidence ??? I don’t believe in them...

Oh they won’t refund foreign investors, I agree there.

But they will have to find the cash somewhere, either by printing themselves into huge inflation or by borrowing more from world banks, or by selling Western debt.

I think they will do a combination.

According to the Free Beacon, the California Public Employees’ Retirement System (CALPERS) is sending nearly half a billion dollars to Chinese companies that expand the Chinese military and push a Communist agenda. This blacklisted investment creates uncertainty for California state workers relying on their pensions and calls into question the integrity of the state’s investments

Could that be the reason for the trillions of US borrowing…to buy back US debt from China at a discount?

Who knows. If we want to buy back our Debt in order to reissue it, that would make sense. It all depends on what China is doing in response to this. Will they bail out their own people or just let them lose their shirts?

My guess is they will want to bail them out for social stability.

“They will do so by going into debt, or sell more US securities or a combination of both (most likely since China doesn’t have the same credit a Western nation has).”

I agree, but they have some problems. They don’t have near the US debt to sell that they used to have, but sell it they will. Which in turn will make the dollar weaker vs the Yuan which is exactly what they DON’T need right now.

And since oil and gas is traded in US dollars energy costs will go up. It takes more weak dollars to buy a barrel of oil.

Chinese borrowing is also problematic as they’ve been making more enemies than friends lately. So I expect monetary tomfoolery that will further weaken their economy. A struggling China will reverberate around the globe.

It’s my understanding that China has 2 currencies, one that Chinese Citizens get paid in and one that is convertible they use to trade with other countries...

The internal currency is worth whatever China says it is, so their citizens are captive so long as they are made whole, their citizens will be fine...

Foreign investors will get screwed....

China is basically waging war with the USA and other western countries, thru unfair trade practices, shipping fentanyl around the world, creating bioweapons like Covid and now thru destabilizing world financial markets....

To me this is just another move on their part to advance their agenda....

China will have to be extremely careful with its economic decisions right now.

I imagine the destabilized world economy would mean people will buy more US securities for the stability the USA has. So China might accept that gamble and drop US debt in order to destabilize the world economy enough that the US dollar goes up.