Democrat President Joe Biden is reportedly “under investigation” for halting billions of dollars in payments that were set to go out to companies that were tasked with finishing President Donald Trump’s southern border wall.

“Now the Government Accountability Office is launching a review to determine whether the new president broke the law by freezing the money in violation of budget rules designed to keep Congress in control of the cash flow,” Politico reported. “The probe highlights the challenge presidents have historically faced in fulfilling campaign promises that require money to be spent — or suspended — at odds with Congress’ intent.”

The report comes as Biden’s border crisis has overwhelmed the U.S.-Mexico border, promoting backlash against Biden from Republicans, Democrats, and even the president of Mexico.

Forty Senate Republicans said in a letter to the Government Accountability Office that in “the weeks that followed” Biden suspending construction of the border wall that “operational control of our southern border was comprised and a humanitarian and national security crisis has ensued.”

The letter added: The President’s actions directly contributed to this unfortunate, yet entirely avoidable, scenario. They are also a blatant violation of federal law and infringe on Congress’s constitutional power of the purse. We write regarding these actions. We believe they violated the Impoundment Control Act (ICA), as interpreted by your office, and we request your legal opinion on the matter. Prompt action to end these violations is required to restore order at the border.

More than 60 Republican House lawmakers joined their Senate colleagues on Tuesday in pushing the GAO to investigate the matter.

TOPICS: Crime/Corruption
KEYWORDS: biden; bordercrisis; borderwall; crime; finishthewall; gao; immigration; stolenelection; trumpborderwall; wall Navigation: use the links below to view more comments.
first 1-20, 21-33 next last
And nothing will happen to Biden as he is not competent to stand trial.
1 posted on 03/23/2021 9:27:40 PM PDT by thegagline
[ Post Reply | Private Reply | View Replies]
To: thegagline

Halted? How about redirected.

Not only is he incompetent to stand trial he wasn’t legitimately elected so he can’t be held accountable for any Executive actions he’s taken.

His lawyers have a golden client.

The POS could have just as easily left the wall to be built as well as the pipeline but he is spineless sellout and the worst kind of American. Maybe we can fight to get both done as this rotting fool wastes away and before giggles the Ho takes over.

“operational control of our southern border was comprised and a humanitarian and national security crisis has ensued.”

Sounds like grounds for impeachment. Which can happen in 2022 when the GOP retakes the House and Senate.

Gonna get 67 GOP Senators in 2022 to remove Plugs the Pedo and Whore ?

First the House has to make Trump Speaker of the House in 2022 (the Speaker can be anyone, doesn’t have to be a member of the House). Then impeach and remove Biden and Harris, and Trump is president again as next in succession. And he can run for another term in 2024.

But it would be OK with them as long as he kept it going, but just took his usual ‘20% for the big guy’.

The majority of the House GOP caucus have exposed themselves as corrupt Derp Staters. They wouldn’t even get rid of Liz Cheney. President Trump would not get a majority of their votes to be Speaker in January 2023.

Secondly, again, where are you going to get 67 Republican Trump-supporting Senators to impeach the present illegal regime ? Like the House, most of the present 50 Republican Senators are also corrupt Derp Staters who were quite content to watch as the government was stolen in November and certified in January.

So the companies that were supposed to finish the wall will sue the federal government. Joe will say “okay, here’s the monopoly money. We’re printing it anyway.”

That’s nonsense, it’s implicit that the Speaker has to be a member. In any case it will never be tested because Trump doesn’t want to be Speaker of the House and the House will never seriously consider attempting to a elect a non-member.

Oooh, the Government Accountability Office!
The dems are so ascreeeered I’m sure!

There's a close antecedent to the situation we face today. FDR came into office as an economic moron, so every Tom, Dick and Harry in the government (and out) was allowed free rein to execute whatever snake oil solutions they believed in.

Fast forward 90 years. Now we have a literal moron in the White House, and the lunatics are running the asylum again.

The GAO is as corrupt as the rest of government. Guess how they are going to vote? 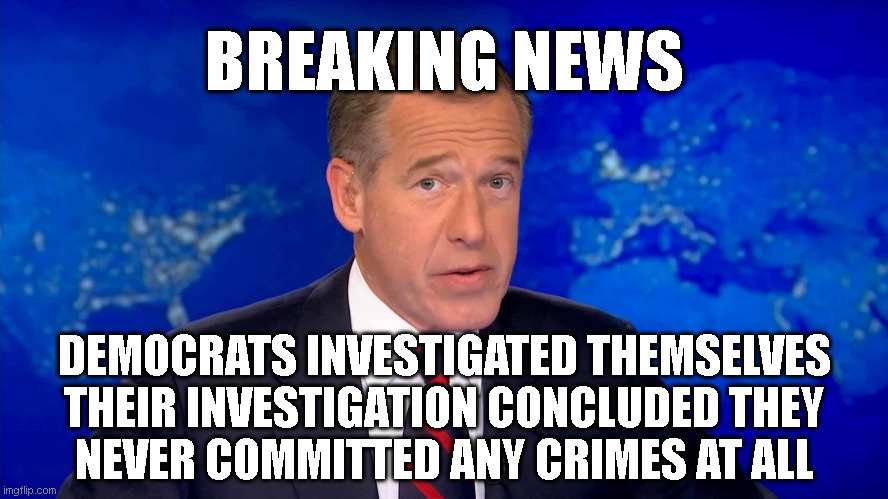