Add Romney to the investigation.

Romney an enemy of the United States.

Gee, what timing by Traitor Romney

What do you expect from Romney? He needs to keep corruption investigations off limit or his deals will become public. That man is lower than a louse.

Pierre Delecto,,,consistently wrong on every issue

Wonder if Romney boys are into the foreign dollars too? Romney is too skittish about any questioning of foreign intervention of the USA...

‘
China brought an 80k diamond to Hunter’s room at night, knowing that he is smitten with them.

They gave him a stake in a company that amounts to $30 Million dollars a year.

And Hunter is a junkie spending $6-10 grand a day!

How’s that for affecting Elections?

“He needs to keep corruption investigations off limit or his deals will become public.”

Yeah, that was my first thought. How could one conclude anything else?

Okay Mitt, what about the Obama administrations using the IRS to stifle opposing political speech?, Is that worthy of the Senate or Government to look into?
Or the FBI using their people to help prop up a failed attempt to unseat a President?

Joseph Cofer Black, is why Mitt needs to sound off.

And was Iran-Contra investigation ‘not the legitimate role of Govrnment’? Romney is such a horsesarse he brings shame on the people of Utah.

And to think that I voted for him.

Paul Ryan, the consummate Washington negotiator, is trying his hand at another kind of deal making, jumping into the rush on Wall Street toward blank-check acquisition companies.

The former House speaker will serve as chairman of a vehicle known as Executive Network Partnering Corp., which will seek to raise roughly $300 million in an initial public offering, people familiar with the deal said. That figure is subject to change based on demand.

Also known as special-purpose acquisition companies, they turn the traditional IPO model on its head by going public before acquiring a business. They have gained popularity as deal makers look to take advantage of the economic dislocation caused by the coronavirus pandemic.

Founded in 2008 by Tagg Romney, Eric Scheuermann, and Spencer Zwick, and in partnership with Mitt Romney (who stepped down in 2019 to join the U.S. Senate)...

Before joining Vivint, Alex started and ran two successful venture-backed companies, and served as Chief of Staff and COO to Governor Mitt Romney in Massachusetts. Alex has a bachelor’s degree in Business Management from Brigham Young University.

I may be wrong ... but wasn’t Mitt’s kid involved with all that too?

As Democrats and the media remain fanatically obsessed with assembling some form of a “quid pro quo” from the infamous Trump-Zelensky phone call, new details have emerged regarding Burisma, the company for which Hunter Biden worked and the company that Ukraine’s top prosecutor had been investigating before Vice President Joe Biden had the prosecutor fired via a months-long pressure campaign. According to web archives, top Mitt Romney adviser Joseph Cofer Black, who publicly goes by “Cofer Black,” joined Burisma’s board of directors while Hunter Biden was also serving on the board.

Isn’t there some Mormon planet that needs a king?? Earth has done it’s duty with that POS.

Wait, I know the answer to this one! 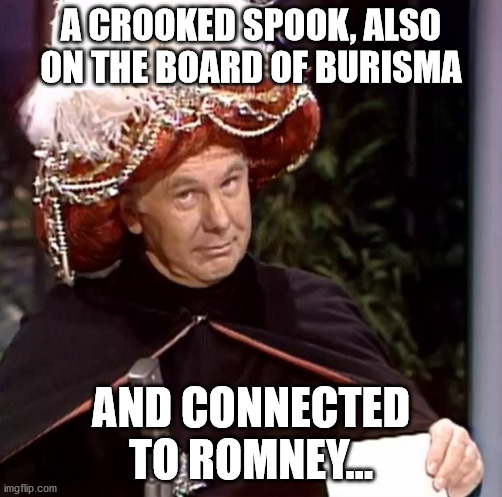 Mitt’s in this up to his chin.