Pointing to warnings by U.S. intelligence officials of Beijing's plan to interfere in the upcoming election on Biden's behalf, Trump said "They own him and they want me to lose so badly." "China owns Joe Biden. His son got a billion and a half dollars. His son with no experience, no brainpower, no anything, never did it, not only Ukraine, he got hundreds of thousands of dollars of money from Ukraine and the upfront payment and then with China he walks up with a billion and half dollars in fees.

I have discussed it with my wife. Biden wins, we move to Israel. She’s Jewish. We do the Aliyah.

If you can get out safely if Biden's elected - do it... It won't be safe staying here.

The Biden comments – unearthed from a 2011 Sichuan University speech – demonstrate either a fundamental misunderstanding of the Chinese Communist Party (CCP), or outright collusion with it.

The former veep stated at the time: “In order to cement this robust partnership, we have to go beyond close ties between Washington and Beijing, which we’re working on every day, go beyond it to include all levels of government, go beyond it to include classrooms and laboratories, athletic fields and boardrooms.” Biden, 77, even advocated for closer ties between the U.S. and CCP on the military front: “…that’s why it’s also important that our military leaders work together, get to know one another — not just our political leaders, but our military leaders.”
Biden takes this reckless approach to the private sector, too:
“The United States should undertake to make it easier for Chinese business people to obtain visas to travel to the United States. It takes much too long for that to happen.” During the 50-minutes he spoke,
Biden expressed support for granting China increased access to high-tech U.S. products: “Already, we have made thousands of new items available for export to China for exclusive civilian use that were not available before, and tens of thousands of more items will become available very soon.

That’s a significant change in our export policy and a rejection of those voices in America that say we should not export that kind of technology to – for civilian use in – China. We disagree, and we’re changing.”

Critics are right to oppose exports of this nature: they often have military applications and can end up in the hands of the CCP. And despite his insistence in the speech trade
with China “supports hundreds of thousands of jobs in America” and insists “it’s in our mutual interest in each of our countries to promote that exchange,” the nearly 4 million jobs lost in under 20 years due to China’s predatory trading practices such as currency manipulation tell a different story.

China’s exports have even harmed American lives: Chinese toys are made with toxic lead paint; Chinese fish are carcinogenic due to the country’s polluted water; Chinese candy has been contaminated formaldehyde; and Chinese drywall is made with radioactive material.

Biden, however, insists: “I believed in 1979 and said so and I believe now that a rising China is a positive development, not only for the people of China but for the United States and the world as a whole.” He continues: “it is in our self-interest that China continues to prosper” and retained hope “a rising China will fuel economic growth and prosperity and it will bring to the fore a new partner with whom we can meet global challenges together.”

None of this has materialized.

Even the location of Biden’s speech, the final stop of his four-day China trip of which increased ties with the country was the main takeaway, speaks volumes: Sichuan University is a CCP funded and controlled institution with former high-ranking party apparatchiks on its board.

The university even utilizes “student information officers” tasked with identifying professors and peers who “show any sign of disloyalty to President Xi Jinping and the ruling Communist Party” and has a track record of intellectual property theft.

In other words, the CCP can requisition any citizen at any time in any place to assist with any goal of which surpassing the U.S. in international standing is paramount. And Joe Biden wants to facilitate China’s unrestricted access to virtually all corners of the U.S.

The dangers of inviting Chinese enterprises into all sectors of U.S. society are not purely hypothetical. Many of the “partnerships” Biden urges already exist – and at great detriment to U.S. workers, companies, and the economy as a whole. The CCP has coerced U.S. corporates to pull advertisements and products displaying Taiwan as a country independent from China and expressing support for the Hong Kong protests along with compelling the entertainment industry to frequently cut anti-CCP content.

The CCP already has a solid foothold in U.S. schools through “Confucius Institutes,” the regime’s international propaganda arm. Even teachers affiliated with the trojan horse organization have admitted it’s a smokescreen for imposing “Chinese morality and values.”

And the CCP-orchestrated Thousand Talents Plan seeks to lure prominent academics a way from Western institutions and reorient their research towards granting China an upper hand technologically and scientifically.

Granting China broader access to American laboratories is also a clear and present danger. Two Chinese nationals were recently arrested for smuggling U.S. biological research, ostensibly at the request of the CCP.

But this isn’t an isolated incident or confined to scientific research: intellectual property theft is China’s modus operandi with nearly one in five American companies falling victim to the predatory scheme in 2019.

A study published by the US International Trade Commission the same year Biden praised China’s progress on the issue “estimated that if IP protection in just China were improved to a level comparable to that in the United States, the U.S. economy would obtain an estimated $107 billion in additional annual sales and net U.S. employment could increase by 2.1-million jobs.”

There’s not enough time between now and the 2020 election to enumerate all the abuses U.S. businesses and workers endured at the hands of the CCP. But it certainly doesn’t take much convincing to see why Biden’s approach to China would wreak havoc on U.S. companies, institutions, and national security.

Biden Center Under Investigation for Illegal Donations From China
DB Daily Update | David Blackmon Posted on 5/25/2020, 9:19:56 AM by EyesOfTX

If the label says “Biden,” it was definitely influenced by China. – John Solomon at JustTheNews.com is reporting that The National Legal and Policy Center has asked the U.S. Department of Education to investigate its findings that the University of Pennsylvania (Penn) has over the past several years accepted more than $22 million in anonymous China-originated donations to its Biden Center and failed to properly disclose the contributions. >{? From Solomon’s report: The complaint, filed by the National Legal and Policy Center, says that over the past three years, the university has accepted around $22 million in anonymous funding from Chinese sources. That’s out of a total of more than $70 million from Chinese donors during that time, the NLPC said. Those significant funds, including the anonymous amounts, rolled in after the Biden Center was announced in early 2017 and launched in February 2018. The center is located in downtown Washington, D.C.

Federal records show that the University of Pennsylvania has received significant donations from China since the opening of the center. One 2018 donation alone totals $14.5 million; it is listed as “anonymous” in federal records. The NLPC alleges the university may have violated federal law in accepting those anonymous monetary donations. The Higher Education Act mandates schools report the national origins of any donations above $250,000 although not necessarily the individual names of donors themselves. [End] This serves as just one more reminder that Biden, his son and his brother have long been in the pockets of Chinese interests. The stark reality facing our country today is that, should Biden manage to win the election in November, all of the gains President Donald Trump has made through the sheer force of his will in terms of U.S./China relations and trade policy will be immediately reversed the day after Biden assumes office.

If you like the fact that virtually all U.S. antibiotics and PPE are sourced through China at some point along their supply chains and want it to stay that way, vote for Biden. Because that would be a fait accompli should he win. There are trillions of dollars at stake, and Creepy Uncle Quid Pro China Joe wants to ensure his family continues to get its fair share.

The stench of panic pandering is strong in this one. – How would you like to be Symone Sanders, the African American hack who serves as racist Joe Biden’s press spokesperson? Sanders has spent the last few days desperately trying to clean up the pile of doggie-do the nation’s Unfrozen Caveman Presumptive Nominee left on the floor on Saturday, when he told a clearly-Black radio host “you ain’t black” if he has a hard time decided whether to vote for Biden or President Trump this November.

>Appearing on MSNBC’s “Politics DC” show hosted by venerable old race-baiter Al Sharpton on Sunday, Ms. Sanders blurted out this bit of obvious panic pandering, as reported at Breitbart News:
“Vice President Biden has committed to making sure that we are underscoring not just the civil rights division and the Department of Justice, the civil rights division across his administration,” Sanders told MSNBC “PoliticsNation” host Al Sharpton. “He is committed to putting judges on the bench that reflect the community, taking a hard look, and making sure that they are African-American judges on the bench, qualified judges on the bench. He has committed to putting a black woman on the Supreme Court.”

So now, in addition to having the standard Democrat Party litmus test of having to be pro-abortion on demand and even after birth, Sanders says Biden will add the litmus tests of being a woman and African American to his list of pre-qualifications when considering his first nominee to the Supreme Court. This kind of rank discrimination is so despicable and anti-American that it is hard to put into words. It takes panic pandering to an entirely new level. But this is Joe Biden, and this is what you can expect if you vote for him in November.

Print this up and get this out there in your precincts

There seems to be a refusal in certain political circles known as the Swamp to blame the CCP (Chinese Communist Party) for deliberately using the Wuhan virus to create an economy here which would prevent Trump get reelected. Letting that happen will create problems we don’t need. Time we point out the loss of employment and the corruption involved.

Get News about corruption spiked by MSM Presented and sourced in Free Republic. com/ An all sides news collecting site by volunteers with no ads or fees which uses donations below just a sample Punch up link for http://www/freerepublic.com/ 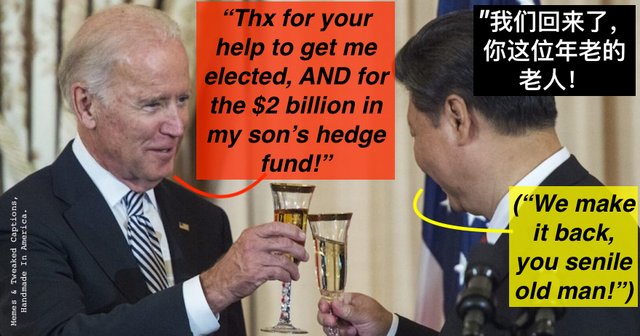 This election is not about electing Biden. It is about getting a woman with melanin installed as President of the United States. Where it be Biden or Harris, China will be in charge.