Black Voters Have Never Had a Place in the Democratic Party
Townhall.com ^ | August 22, 2020 | Diamond and Silk

We often refer to the Democrat Party as the “Democrat Plantation.” Some think we are actually talking about a plantation. We’re not. We are talking about a mindset that keeps you restricted by beliefs that control you.

The liberal Democrat Party has been pulling the wool over black Americans’ eyes and giving conflicting signals for decades. They say one thing and do another; they never uphold any of their promises. Democrats love keeping black people in a fight, causing us to distrust everything. We’ve been taught not to trust anybody, not even ourselves.

The goal is to keep minorities dependent on Democrats instead of showing them how to depend on themselves.

Democrats attempt to force us into their amoral beliefs through education and indoctrination against traditional right and wrong. They left black Americans wounded while portraying them as the face of victimhood. They stifled freedom of speech and freedom of thought with political correctness. When they’re questioned about their actions and intentions, they’ll brand and label you with terms like xenophobe, Islamophobe, homophobe, racist, white nationalist, and white supremacist.

Looking at the Democrat Party today, in our opinions, they’ve always been the party of division. To divide and conquer are their goals. They divided Americans based on race, gender, sexuality, and class, then put us against each other. A lot of the oppression going on in our country has been created by liberalism and liberal ideology, whose strongest supporters happen to be black.

Liberalism tells everyone that the statues are the problem; the statues are racist. Instead of people doing research, they attack something made of bricks and stones, something that can’t feed them, clothe them, or give them a job. After seeing just how easy it was to control the narrative, liberals told everyone that the American flag was against them as black people. Once again, instead of doing research, people went out of their way to disrespect the very thing that represents the men and women who fought for their freedoms.

Kneeling on the flag is another way for liberals to control the narrative while creating a fog that keeps people from seeing the real truth about what’s happening within the black communities.

Black-on-black crimes get swept under the rug. Where are all of the marches against blacks killing other blacks? Everyone is quieter than mice peeing on cotton.

Don’t get us wrong, we love our police officers, even though there are a few bad apples in the bunch. But to demonize all police officers, whose job is to protect and serve, is wrong. The people you demonize are the same ones you call when you need help. Like I said before, when you need an officer, you can’t pick up the phone and call Black Lives Matter. You can, however, pick up the phone and dial 911.

Black people have never had a place in the Democrat Party; they were just tolerated. Democrats have cleverly and strategically created division and oppression within the black community. Just listen to the words of Lyndon B. Johnson, spoken to Democrat senator Richard Russell Jr. of Georgia regarding the Civil Rights Act of 1957:

These Negroes, they’re getting pretty uppity these days, and that’s a problem for us since they’ve got something now they never had before: the political pull to back up their uppityness. Now, we’ve got to do something about this. We’ve got to give them a little something, just enough to quiet them down, not enough to make a difference. For if we don’t move at all, then their allies will line up against us, and there’ll be no way of stopping them. We’ll lose the filibuster, and there’ll be no way of putting a brake on all sorts of wild legislation. It’ll be Reconstruction all over again.

It makes us cringe when we hear black Americans praise Lyndon B. Johnson and talk about how he passed the Civil Rights Act and signed it into law. He was a known racist. The crazy thing is, some sources also attribute this quote to Johnson: “We will have those n*****s voting Democrat for the next 200 years.” So while he was signing the Civil Rights Act into law with one hand, he was unapologetically spewing racist words and trying to control the black vote with the other hand.

Diamond and Silk, born Lynnette and Rochelle Hardaway, became overnight celebrities because of their early support for Donald Trump's candidacy for President of the United States. Their fearless and astute commentary on politics and social issues can be enjoyed on Facebook, Twitter, and at ChatDit.com. TOPICS: Culture/Society; Editorial; Politics/Elections
KEYWORDS: africanamerican; demonrats; joebiden; politics; race; racism
A few pictures of them that I found 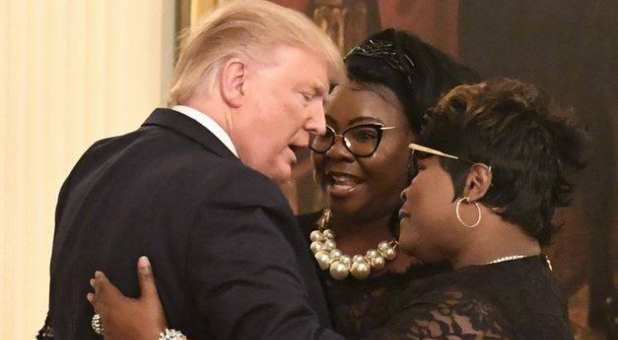 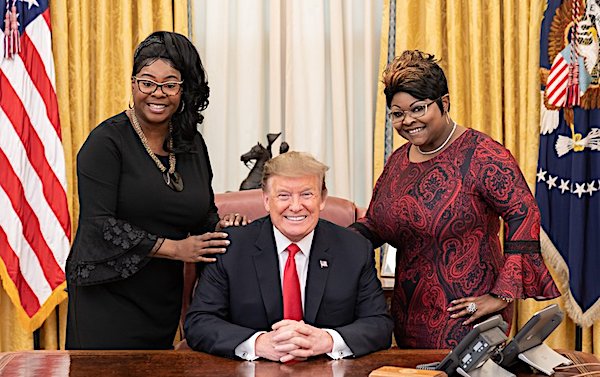 That they do....and so does a whole bunch of others that have seen the light and left the RAT plantation for good.

Not to mention a huge backlash coming from citizens who were directly impacted by rioting, looting, assaults and rise in crime due to inaction by local/state leftist leaders.

Election night is going to be beautiful.

More than ever, the Republic is at stake.

Brown is the new Black. Democrats are so fickle.

Sure they have. They were the democrat party’s slaves.

“Fickle” is waaaay too kind! LOLs! They are so funny! I even heard Roseanne Barr pay them a compliment as comedians. 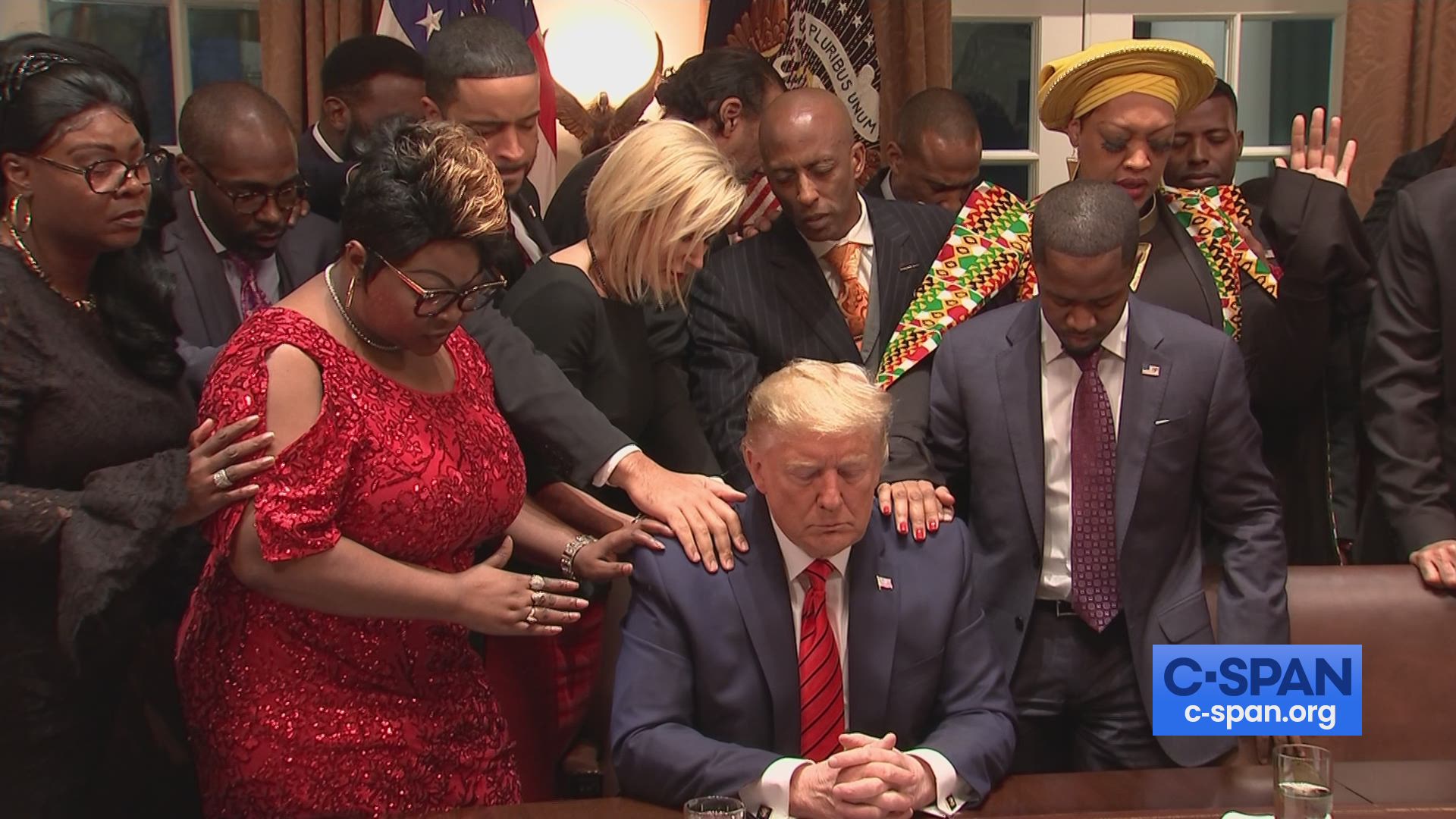 “Black Voters Have Never Had a Place in the Democratic Party”

Sure they have. On bended knee handing in their ballots marked voting for Democrats.

I heard them from the start....Glad they are getting the success and attention for getting the word out. I think they are smart, very compelling to listen to and kind of adorable.

The goal is to keep minorities dependent on Democrats instead of showing them how to depend on themselves.

AND THEM CAME TRUMP game over.

Not quite right. You're supposed to trust Biden, Hillary, Obama etc. Believe whatever they say.