Ben Carson: America Needs to 'Grow up' and Stop 'Being Offended by Everything'
christianheadlines ^ | June 15, 2020 | Michael Foust

HUD Secretary Ben Carson on Sunday urged Americans to stop being offended “by everything” and to “grow up.”

Carson, the secretary of the Department of Housing and Urban Development, made the comments on ABC’s This Week with George Stephanopoulos after being asked about President Trump’s acceptance speech being scheduled in Jacksonville, Fla., on Aug. 27, the 60th anniversary of a KKK mob attacking mostly black civil rights protesters in that city.

“Is it appropriate to be having a convention speech on that anniversary in that city?” Stephanopoulos asked.

“It really gets to a point of being ridiculous after a while,” he said. “And, you know, we’re going to have to grow up as a society.”

Earlier, Carson said the U.S. can only be destroyed if Americans “destroy ourselves.”

“We have to stop putting everything into the arena of combat. Let's see if we can find a way to work together because if we don't, we’re doomed,” he said.

Carson also pushed back on criticism of Trump’s suggestion to governors of “dominating the streets.”

“There are lots of different ways to express things,” Carson said. “I believe what’s being said there is obviously we cannot submit to anarchy. I think we would all agree with that. We might not all express it the same way, but we would all agree with it. And we’ve got to begin to look at the big picture, what is the thing that we’re aiming to do, not what someone said this day or that day.”

Stephanopoulos asked Carson, a medical doctor, if it was appropriate for Trump to hold campaign rallies again.

“I think if it’s done in conjunction with the public health experts, which it is being done in conjunction with them, that’s quite acceptable,” Carson said. “We do need to always, all of us, need to do what we can to prevent the spread of COVID-19, but it is very important that we utilize what we have learned about the disease so that we can live with it, rather than allow it to dominate us and determine how we’re going to live.”

TOPICS: Crime/Corruption; Culture/Society
KEYWORDS: carson Navigation: use the links below to view more comments.
first previous 1-20, 21-40, 41-45 next last
To: MarvinStinson

Its called “self righteteous indignation” aka Bull S#!T and as Fake as CNN,WaPoo and NYT

Turn it on turn it off ast will

Cant strike a woman days are over and “ladies”(big dif between a lady and a woman) can thank the women and skanks of the left for that.

As a child whenever I whined that someone called me a name or hurt my feeling I always got the old, “Sticks and stone will hurt my bones but words will never hurt me.” I guess it worked for me.

if they want to not be ladies, they can’t go trying to hide behind femininity after being violent in hopes they don’t get treated the way they treated others.

Yep, I completely agree with you. It works both ways. Thank you for completing the thought.

1. Do not do things that are intended to be unnecessarily offensive to other demographics.

2. Do not be so easily offended that this INVITES even greater offensive pushback which then becomes necessary.

When it comes to “getting even”, there is no recognized point at which all parties concerned think they are now “even”. Grievance and oppression are but opposite sides of the same coin.

no double standards for anyone, no exceptions

America’s “Karens” have become as much a danger to the Republic as Antifa.

No real Americans at all.

Nothing they do is real.

The issue is never the issue.

The revolution is always the issue.

I wish he was more dynamic and had changed some of his views. I would have loved to vote for him.

I am glad he is part of the administration

And much more humorless, and their “music” really sucks. And less well-educated (a lot of their “education” has been indoctrination).

I don’t think it is as much of a “America” problem as it is a “radical left” problem. The radical left is pushing these ridiculous tactics for advantage.

The young have been indoctrinated to be hypersensitive and much of the country is intimidated by the tactics and just don’t want to be in the line of fire. 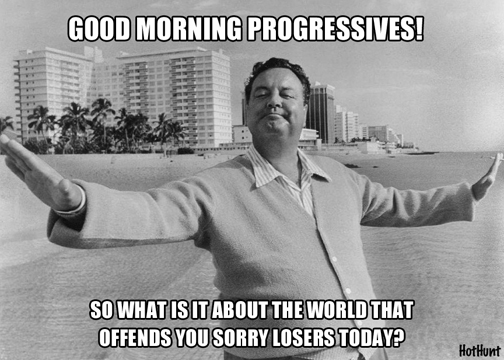 There is too much money in victimhood.

If the jews were as sensitive as BLM, we wouldn’t have trains anymore.