Why is the So Left Insane? That Anti-July Fourth WaPo Piece Exposes What They’re Being Taught in Colleges
Townhall ^ | 07/05/2020 | Matt Vespa

President Trump decided to celebrate our nation’s birthday and in doing so, set off a meltdown not seen in quite a while from the media. Who am I kidding? It was a day that ends in “y” with these clowns. If Trump said the sky was blue, they would dole out endless articles attacking him. Trump decided to kick off the Fourth of July weekend by delivering a speech and fireworks show at Mount Rushmore in South Dakota. That really set off the Left. And it didn’t stop there. This whole weekend is going to be grade-A Trump derangement entertainment from the press. And then, there’s these perspective and op-ed pieces from liberals that bash America.

Take this one in The Washington Post, which says the global legacy of our independence has to be reconsidered. Again, the Left is attacking our founding, which isn’t out of the ordinary, but the history professor who penned this piece exposes what kids are being taught in higher education. It’s not pretty. As some have already pointed out, the thesis of the piece is just historically illiterate. America’s independence is responsible for the spread of global racism or something. Oh, and when we finally broke away from Britain, we somehow set forth the UK’s conquest of India or something.

As Joe Gabriel Simonson at the Washington Examiner noted, the Brits had been in the Indian subcontinent since the 16th century. And yes, he also said this is what’s being taught about this nation in higher education because you know this isn’t the only professor spewing this garbage. You can see why the ‘woke’ legions are so unhinged if they’re being taught this nonsense (via WaPo):

The first is the central paradox in U.S. history: The nation’s democracy was founded as a slave society.

The second is that after cutting political ties with Great Britain, Americans doubled down on the British Empire’s project of colonial domination. The American Revolution inspired freedom movements in other parts the world. But it also contributed to the worldwide spread of white supremacy.

In the century after independence, the United States went from being a province of Britain’s empire to building its own empire “from sea to shining sea” and then overseas in Hawaii, Puerto Rico, the Philippines and Guam.

When President Thomas Jefferson set the country on a path of westward expansion, he imagined an “empire of liberty” that would spread freedom across the continent and protect the nation from the “dangerous extension” of British power. But the growth of slavery and the “removal” of native peoples on the mainland were achieved by force, not consent.

Across the Atlantic, Britain responded to the loss of the 13 colonies by developing a “second,” much larger empire in Asia, Australia and Africa. Both the American and the British Empires post-1776 were structured by racial hierarchy, violence and a systemic devaluation of black and indigenous lives.

Consider, for example, the case of India. In the decades after U.S. independence, the British East India Co. conquered most of the subcontinent. British colonizers embedded racism in the law, political economy, geography and culture of British India from the late 18th century.

Britain’s settler colonies in Canada, New Zealand, Australia and Africa caused the violent dispossession of indigenous peoples and frequently justified the idea of black extermination. In 1825, for instance, a white settler in Australia publicly proposed: “The best thing that could be done would be to shoot all the Blacks … the women and children should especially be shot as the most certain method of getting rid of the race.” Despite self-aggrandizing claims to the contrary, Britain’s abolition of slavery in 1833 did not stop racism. In fact, colonial expansion intensified colonial racism.

Genocidal violence was a foundational pillar of the British Empire, not an accidental or unintentional outcome. As a consequence of colonial policies, as many as 30 million Indians died of starvation during three major famines that ravaged the subcontinent in the last quarter of the 19th century.

After America declared independence from Britain, both countries maintained powerful traditions of racism and violence that were distinct and interconnected.

I mean, is this a joke? The United States is at fault for Britain’s…total colonization of India. If we didn’t break free, India wouldn’t have been colonized…by an imperial superpower like Britain? Doubtful. But that’s a useless historical debate. We did break free and we shouldn’t apologize for that. And somehow our independence has to be reconsidered due to some oddball global racism paradigm is just ‘woke’ trash. There is no room for nuance or character error with the Left. You must be perfect. You must be progressive. You must have zero so-called problematic blemishes in your past otherwise you’re erased. That’s not how life or the human condition work.

There will be flaws. Every nation has dark points. That’s just a fact. But this notion that global racism was caused by our independence is just absurd. At face value, this whole piece is just trash and shows the dangerous consequences of historical revisionism. We're to blame for all the world's evils because...we broke free from King George III. How about we put down the crack pipe. And I thought Sen. Tim Kaine (D-VA) saying that we invented slavery on the Senate floor was bad. This one may have topped that. 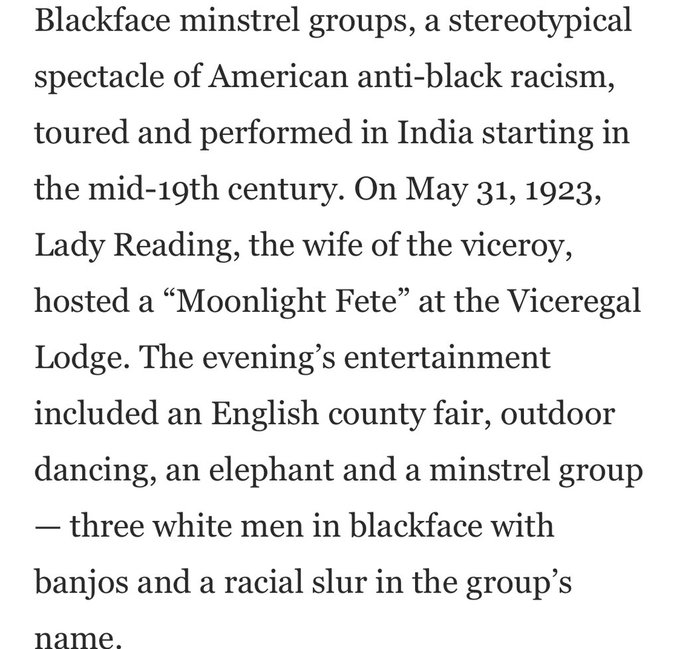 And yes the author is a professor so that’s what parents and students are paying 65k a year to hear.

Basically “The Declaration of Independence forced England to invade India” is a central thesis of this piece. 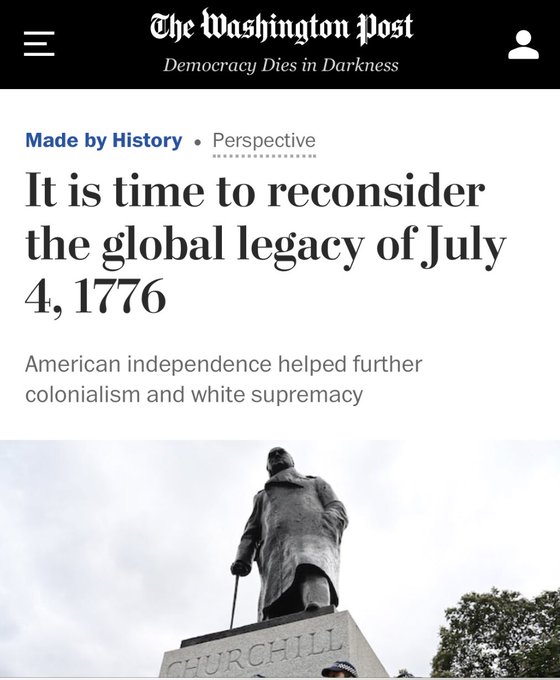 I wonder if The Washington Compost is aware that the only place on earth where slavery still exists is in Africa.

The Left in the West is insane because +Cultural Marxism was designed to produce crazy people incapable of sustaining a culture and civilization.

Their crap wouldn’t be tolerated among the Soviets who were the intended beneficiaries ion the destruction they were to cause.

Can’t say that as it would be, among other things, Islamophobic to admit that.

When Obama went anywhere where was the First place he stopped and Preached ? It was always a School of some kind

Been quite a while since I was in a high school history class, didn’t take any in college, but I went to UMASS/Amherst-a buzzing hive of ANTIFA sh*t- so no telling what I’d have been exposed to. When I was there, it wasn’t as bad as it is now. The crazies had ‘coming out week’ every other week, it seemed and they walked around class to yell that a few professors were doing anthrax research.

Anywho, can someone tell me when the American Empire spread around the world? You know, like the Roman Empire or English Empire? Where America controlled large swathe’s of land across the globe.

Or when the US military marched across the globe to take it over like Alexander the Great, Atila the Hun, Ghengis Khan, the Nazi’s? I must have missed those classes or was allowed to sleep through them.

Protests are easy to arrange when bored idiots get over $600/week for doing nothing useful.

Most major ‘rat cities have an affluent white area and lots of poor blacks.

The poor blacks don’t realize that lower income whites were run out of town by blockbusting about 50 years ago as a result of the “Fair” Housing Act.

The poor blacks incorrectly think all whites are affluent and bemoan the apparent inequality.

The NASDAQ stock market doesn’t care about the skin color of share purchasers.

Why does Jeff Bezos own this trash leftist newspaper, which has taken a hard-left turn under his leadership?

In fourth grade in 1982 Sister Mary Quigley Amadeaus reinforced these matters into our heads in American History class.

The good news is that most colleges universities are financially wobbling...

Cuba was set free
Puerta Rico and Guam were kept as territories
The Philippines were run as a sort of commercial colony for about 50 years. Interestingly enough, the Filipinos I know have both good and bad to say about the US administration but nothing but scorn for the Spanish.

The US never called the Philippines a “Colony” but it was, for all effects and purposes, an imperial possession.

In the grand scheme of things, The Philippines, Guam and Puerto Rico were a pretty poor empire.

I wonder why we kept Puerto Rico instead of making them independent, like The Philippines?

“I wonder why we kept Puerto Rico instead of making them independent, like The Philippines?”

I have wondered that too. My guess would be, at the time it was a smaller less significant place.

Guam is in a strategic location, as is the Philippines