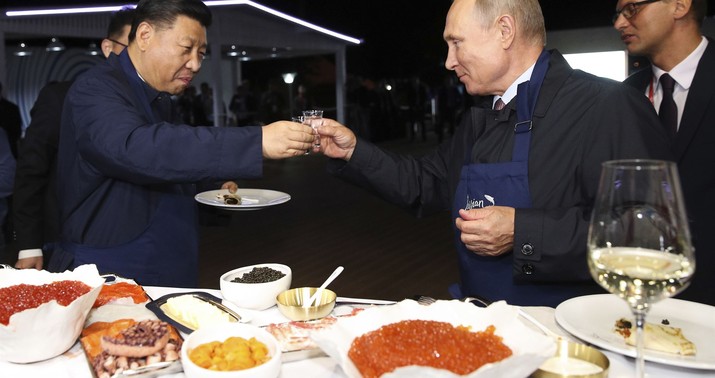 Last week I wrote about some indications that Russia’s coronavirus numbers may not be accurate. Specifically, the number of health care workers who’ve died from the virus is far higher as a percentage of total deaths than anywhere else in the world. Today, Russia tried to allay suspicious that it’s numbers aren’t accurate by releasing some additional details about how it calculated deaths last month:

The Russian government on Friday presented more detailed mortality figures for last month that include more deaths linked with the coronavirus, in a bid to dispel suspicions from some Russian and Western experts that authorities were trying to lower the toll for political reasons…

Deputy Prime Minister Tatyana Golikova said that 1,675 people died of COVID-19 in April. Of that number, 1,136 deaths were directly caused by confirmed COVID-19, while the remaining 539 tested negative but most likely died of the virus. In addition to that, she said, 1,038 others tested positive for the virus but died of other causes.

If all three categories are counted as COVID-19 deaths, the nation’s total toll for April would stand at 2,713 or nearly 60% more than the previously announced number.

The story goes on to say that Russia’s death toll, which currently stands at 4,374 is still much lower than other countries with similar outbreaks. But there could be some legitimate reasons for that. For one, much of Russia is sparsely populated. For another, life expectancy in Russia is so much lower than in much of the rest of the world that there are probably fewer elderly people who are most likely to die from the infection.

But that wouldn’t explain why figures in the the republic of Dagestan seem to have been manipulated to keep the coronavirus death toll artificially low. Nearly two weeks ago, a blogger interviewed Dagestan’s health minister about the death toll and here is the explanation he offered:

Gadzhiibragimov’s answer: Twenty-nine deaths from COVID-19 among 13,000 infections. But 657 people, he added, had died from “community-acquired pneumonia.” He also said more than 40 health workers had died while on duty…

“It wasn’t a sensation at all,” said Ziautdin Uvaisov of Patient Monitor, a Dagestan-based aid organization. “People could see the dead piling up, and it long ago became clear the official statistics have no basis in reality.”

If you assume Russia is playing similar games in other regions, then its death toll is certainly far higher than is being reported. Meanwhile, the Moscow Times reported earlier this week that Russia’s head of coronavirus information doesn’t seem too worried about it.

Doctor and television presenter Alexander Myasnikov was appointed in April to his new role of informing Russians about coronavirus treatment and prevention methods and to battle “fake news” about Covid-19. After calling the country’s reported low death rate a “Russian miracle,” Myasnikov said last week that “those meant to die will die” from it.

In an interview that aired Wednesday, Myasnikov gestured for the cameras to stop running and said candidly: “It’s all bullsh*t.”

“It’s all exaggerated. It’s an acute respiratory disease with minimal mortality,” he told television personality Ksenia Sobchak in the interview for her YouTube project.

Today the NY Times reports fresh evidence that ordinary Russians are angry about the government’s handling of the crisis.

Anastasia Nikolskaya, a psychologist at Kosygin State University in Moscow, worked with a team to conduct 235 telephone interviews with a cross-section of Russians in May. She said she encountered far more, and far more intense, invective toward the Kremlin than in focus groups she had conducted in years past.

“We are entering a rather acute phase of public discontent,” said Mikhail Dmitriev, an economist and public-opinion expert who reviewed Ms. Nikolskaya’s findings. “If the level of aggressiveness in society remains this high, it will influence people’s political behavior after the quarantine measures are removed.”…

“You get the feeling that Putin always got lucky, and now he’s unlucky, and things aren’t going according to the Kremlin’s plan,” said Ivan Zhdanov, who heads Mr. Navalny’s Anti-Corruption Foundation. “There is a window of opportunity opening up.”

We know people are angry in China too which is why censors have worked so hard to clamp down on messages that aren’t helpful to the CCP. But popular anger doesn’t necessarily matter in an authoritarian state where the current leader intends to make himself president for life.

“Those meant to die will die”

Sounds like good Presbyterians with their belief in predestination.

You disagree - out the window with you!!

“Sounds like good Presbyterians with their belief in predestination.”
—
They can’t help it. They were predestined to believe that.
:D

In a way, perhaps a negative way, it doesn’t really matter.

I guess I’m as morose as the Russians.

So if Russia has a lower death rate than countries like the US that are artificially inflating their numbers (and creating a perverse Incentive to do so), the must be lying? Ok then!

Harsh... But true as well. Pass the vodka.

10 posted on 05/30/2020 8:26:51 AM PDT by Bratch (Â“If liberty means anything at all, it means the right to tell people what they do not want to hear.)
[ Post Reply | Private Reply | To 1 | View Replies]
To: Jan_Sobieski
So if Russia has a lower death rate than countries like the US that are artificially inflating their numbers (and creating a perverse Incentive to do so), they must be lying? Ok then!

What part of the last 3 years of deep state intrigues do you not understand? Is Fauci an honest man? How about Bill Gates? Nancy Pelosi? Comey? Brennan?