For Dems to Succeed, Americans Must Fail
FrontPage Magazine ^ | May 19, 2020 | Michael Cutler

Inside the Left's morbid agenda to destroy America's middle class.

Many claim that the Democrats want open borders to import millions of new voters who will likely vote for Democrats.

Undeniably this is an accurate statement but only partially addresses the strategy behind the Democrats’ push for open borders and an end to immigration law enforcement as optimized by the creation of “Sanctuary Cities” and Sanctuary States and immigration mayhem that ensues.

Today’s Democrats bear no resemblance to the Democrats of the past.  Today’s Radical Democrats are hell-bent on seizing permanent political power at the expense of America and Americans.

Traditional Democrats supported American workers and addressed their concerns while Republicans backed up business owners’ goals of fewer regulations and greater profits.  This balance made sense and helped Americans and America to prosper.

Homeless rates soar as the cost of housing increases as more foreigners come to the United States and seek housing.  The increased demand for apartments drives up the price of housing even as jobs are lost and wages fail to keep up with increased costs of housing.

As more Americans lose their jobs and the ability to support themselves and their families- even if they don’t lose their jobs, they will be drawn to the Democratic Party candidates who offer to provide Americans and aliens alike with economic assistance that they desperately need to survive.

Consider the May 12, 2020 news report published by PJ Media, Democrats' $3 Trillion Bill Would Include a Massive Gift...to Communist China.

There are many elements of the proposed emergency funding bill concocted by Nancy “Let them eat ice cream” Pelosi and her fellow travelers of the Radical Democratic Party that have absolutely nothing to do with assisting struggling Americans and small businesses that were ordered shuttered because of the Coronavirus Pandemic that has sickened millions and has killed an estimated 80,000 Americans, thus far.  One of the most egregious components of this bill has been ignored by the media that is addressed by PJ Media.

Here is the relevant excerpt:

They’ve also prioritized China’s economy in this one. The bill includes a provision that waives Chapter 83 of title 41, United States Code. What’s that?

Chapter 83 of title 41, United States Code, shall not apply with respect to purchases made in response to the emergency declared by the President on March 13, 2020, under section 501 of the Robert T. Stafford Disaster Relief and Emergency Assistance Act (42 U.S.C. 5191) and under any subsequent major disaster declaration under section 401 of such Act that supersedes such emergency declaration.

Chapter 83 of Title 41, United States Code is none other than the Buy American Act. That 1933 law prioritizes American manufacturers over others when the government makes purchases. The Trump administration strengthened the Buy American act last year. The Democrats’ bill would waive it permanently, allowing the government to purchase more goods from overseas, unrestricted.

Consider that the afore-noted Buy American Act was enacted by a traditional Democrat, President FDR who acted to protect American jobs and manufacturing the year after the Stock Market cratered on July 8, 1932 and stocks hit their lowest point.  Roosevelt also ramped up immigration law enforcement to protect jobs for American workers.

The Buy American Act requires that the federal government must prioritize the purchase of supplies from American companies when such made in America supplies are available.

This is commonsense and helps America and Americans.

Yet during the current crisis the Democrats want to eliminate this requirement that protects American jobs that has been on the books for nearly 90 years.  They are exploiting the pandemic crisis as a means for pressuring the Republicans and the President into ending this important long-standing law.

I doubt that any so-called journalists will even report on this major betrayal, let alone ask Pelosi or any other Democrat about why they included this provision in their proposed legislation.

It is clear that they seek to destroy more jobs Americans desperately need, especially in this post coronavirus era where tens of millions of Americans fear that they will have lost their jobs permanently when the U.S. economy slowly reopens.

Their proposed legislation would also provide amnesty to illegal aliens declaring aliens working illegally in the United States as “Essential Workers” even as many Americans have been kept from working because purportedly their jobs are un-essential!

If the Democrats were truly concerned about the plight of American and lawful immigrant workers and their struggling families, they should favor immigration law enforcement and suggest that for the meanwhile Americans should be able to take “essential jobs” to help them get through this unparalleled crisis.

This crisis has emboldened Radical Democrat’s to push an agenda that destroys the American middle class to propel more Americans into homelessness and dependency on the Democrats.

Indeed, the Democrats continue to push for passage of “Comprehensive Immigration Reform” a legislative disaster I have come to refer to as the Overwhelm America Act.

During the interview de Blasio referred to the supposed “12 million undocumented folks” to describe the population of illegal aliens which has been estimated to be nearly double that number.  That number, however, is only the tip of the proverbial iceberg.

If legalized, everyone of those millions of illegal aliens would have the absolute and immediate right to bring in each and everyone of their minor children and their spouses as lawful immigrants.  Third World countries have many, many children.

It is not uncommon for such families to have more than six children each.  Additionally aliens could claim to have fathered children with women who are not their spouses.  It is entirely possible that each legalized alien could, on average, petition for more than three children each, considering that some aliens might not have minor children, don’t want them here or already brought them to the United States.

If, for the sake of argument, 25 million illegal aliens were given lawful status- and that number could be much, much larger, we could wind up with more than 75 million minor children being brought legally to the United States by this ill-conceived program, along with their other parent.

In other words, Comprehensive Immigration Reform could enable more than 100 million new immigrants to legally come to the United States, literally overnight!

Imagine the impact that tens of millions of children this would have on our schools, hospitals, mass transit, the power grid and other elements of critical infrastructure.  The cost of housing would climb still higher leading to more poverty, more homelessness and more crime.

When those tens of millions of immigrant children become adults they will flood the over-flowing labor pool.

Finally, if our political leaders would be sufficiently corrupt and stupid to provide an unknown number of illegal aliens with lawful status, there would be no way to interview these millions of illegal aliens who either entered the United States without inspection and/or violated multiple immigration laws after entering the United States.  There would be no way to conduct field investigations to verify the claims made in their application and to identify fraud.

Immigration fraud was identified by the 9/11 Commission, to which I provided testimony, as the key method of entry and embedding for terrorists.

This is why I have also come to refer to Comprehensive Immigration Reform by another name, the “Terrorist Assistance and Facilitation Act” as I noted in an Op-Ed I wrote for the Washington Times Immigration bill a 'No Go' and that was quoted by then-Senator Jeff Sessions when he persuaded members of the U.S. Senate to vote down that terrible bill in 2007.

I also used that descriptive title in my responses to written questions from Senator Chuck Grassley when I testified before the Senate Judiciary Committee Hearing on March 20 2013 on the topic Building An Immigration System Worthy Of American Values.

Decent Americans are horrified by the growing number of homeless Americans.  The immoral Radical Democrats, however, are encouraged that their strategy to force Americans to trade their freedoms for food, shelter and other necessities is working.

For Radical Democrats, winning isn’t everything- it is the only thing!

The title says it all.

It could have been shortened.

The dims want us to become Venezuela. With the 1% wealthy politicians and their donors at the top and 99% dependent on government bennies.

until the money runs out. See Venezuela.

7 posted on 05/19/2020 11:31:51 AM PDT by laplata (The Left/Progressives have diseased minds.)
[ Post Reply | Private Reply | To 5 | View Replies]
To: Albion Wilde; All
[Today’s Democrats bear no resemblance to the Democrats of the past. Today’s Radical Democrats are hell-bent on seizing permanent political power at the expense of America and Americans.]

This statement is 100% true and accurate.

You can see them in action at Yahoo. They are nuts and are Hell-bent on taking down the country. They're too stupid to see the destruction they're doing. But then, they love the Lying Kenyan. It was fun while it lasted. Yeppers, that sure is the truth.. Hubert Humphrey is dead.. Nancy Pelosi and the commie Alexandria Ocasio-Cortez are in charge of that party now..
When I tell that to the folks that use to be my friends and they go off like bottle rockets... :)

Funny how so much of this is identical to what the No Borders Bush Republicans were pushing.

They're rich, super-rich. Let the rest of the Americans eat cake.

If they can find cake in a dumpster.

W. Bush at the funeral for 5 Dallas cops killed by a BLM terrorist

A few of us think that W. appears to be ... sauced-up in that thing. He has very few friends after burning conservatives but the liberals now love him because he likes the Lying Kenyan and hates pro-America, pro-American, anti-NWO President Donald Trump. 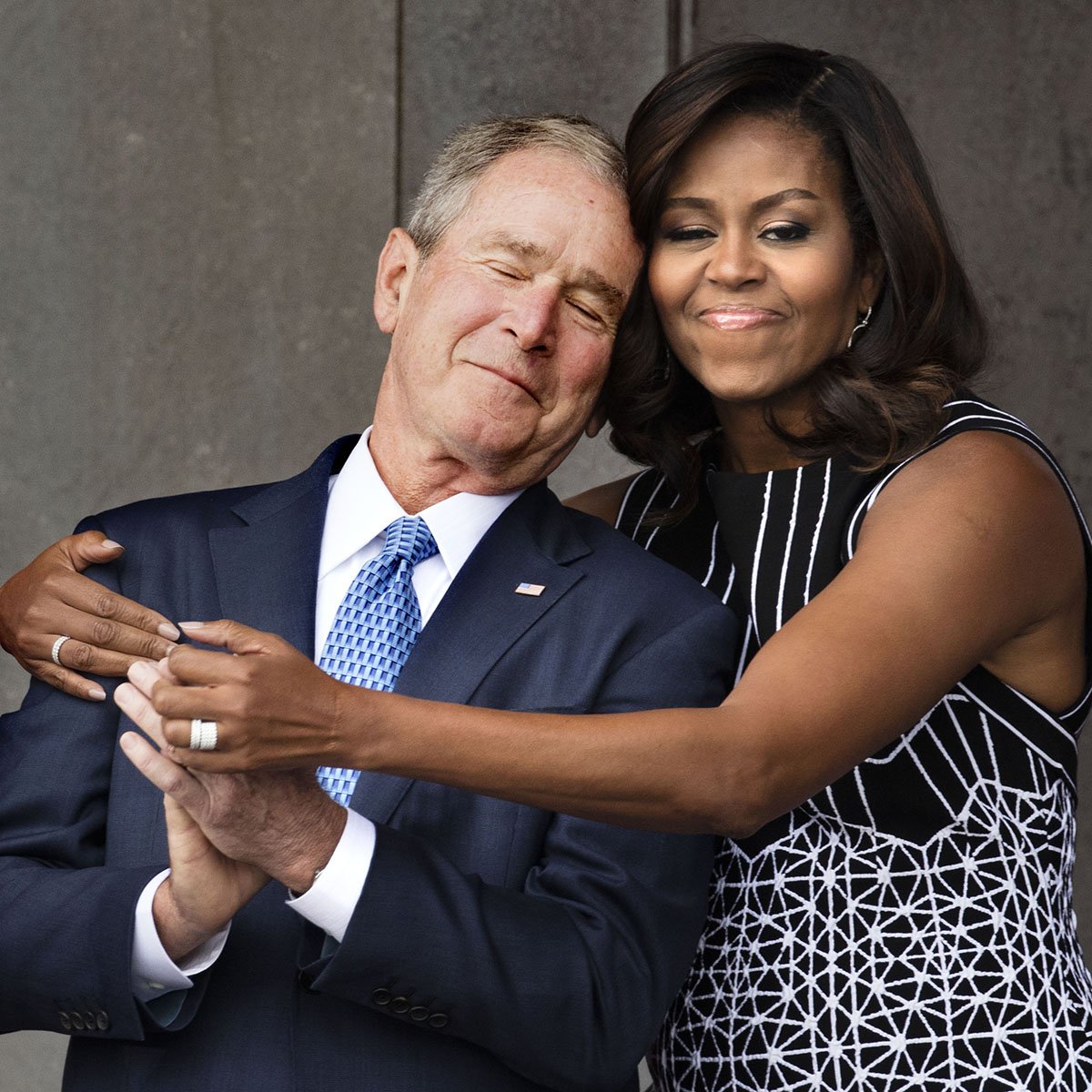 “Throughout history, poverty is the normal condition of man. Advances which permit this norm to be exceeded — here and there, now and then — are the work of an extremely small minority, frequently despised, often condemned, and almost always opposed by all right-thinking people. Whenever this tiny minority is kept from creating, or (as sometimes happens) is driven out of a society, the people then slip back into abject poverty.”

Thank you for the ping

Some great graphics there, Save Ferris.

Love the one with Obama and Bush W. swinging together to the globalist music.

Bush W. has been awful quiet. He’s afraid to show his face because Trump told the truth about his massive failures and treason.