Mike Purpura played the video immediately after taking the podium on Saturday.

And there Schiff was lying his face off for the whole world to see.

On Saturday, Trump’s lawyers confronted the serial liar in person, making the blood drain from his face.

Watch Barrasso explain how the blood drained from Schiff’s face:

I’m so jaded at this point, I’m not willing to give any RAT the benefit of the doubt.

God will deal with pathological liars like Adam Schiff.

I agree - my point in making that clarification was NOT to give Schiff the benefit of the doubt.

I just think we have the truth solidly on our side so I hate to see us being the ones doing the exaggerating.

For example, I really don’t think Joe Biden is a pedophile or a molester - just very poor judgment when being photographed and getting recorded sayng weird stuff. I’m a grandfather - my grandchildren sit on my lap and hug and smooch and tickle and what not.

Thank God, nobody has ever questioned whether I was being “appropriate” or not - but it would break my heart if I had to worry about that.

So, I hope Biden loses - I have no sympathy for him because he’s corrupt and he’s a ‘Rat. But nobody deserves to be called a pedophile when they’re not one.

So, I don’t join in with the pedophile memes with joe Biden - and I’m glad Trump doesn’t go there.

I would feel a lot better if Barrasso saw blood draining out of his eyes and ears.

Yep - there were several times when I knew the “managers” had to be dribbling into their undies...if the team could so soundly debunk the whole deal in only two hours, I can’t wait until Monday’s session begins...

:) Thanks, MortMan. Catnipman was so mean (who can live that way?) I considered logging off FR and never looking back. I know what I heard — that the official camera would not show the gallery and Senators — and was simply passing on the info.

Snuggling and smooching with your grandchildren is one thing, but trying to feel up a child who you don’t even know is another.
https://www.youtube.com/watch?v=rbKrV1NCxBI

Maybe so; but the Senators could sure direct their eyes anywhere they wanted!

Quite a few others who simply can not see what is going to happen to them besides Schiff.

I’ve always thought that one shouldn’t kid around in a court proceeding, but what would I know...

Very good that Freepers are posting links to salient YouTube videos. There is so much data out there a mouse click away that we need to be able to zoom in on what is key. Free Republic itself is just such an indicator of where the clues are the thickest. This refuses the forces of evil their greatest asset - hiding in plain sight by the use of camouflage, distraction, deflection. BANKS, BANKERS, BANKING

Adam Schiff knows he's lying like a rug. You can see it in his eyes. It's taking a heavy toll on his soul. He looks like he snorted a kilo of cocaine. Something very, very wrong with that man. That's a look of fear from a very irrational person. His brain is not able to process his lies without revealing it to the world. 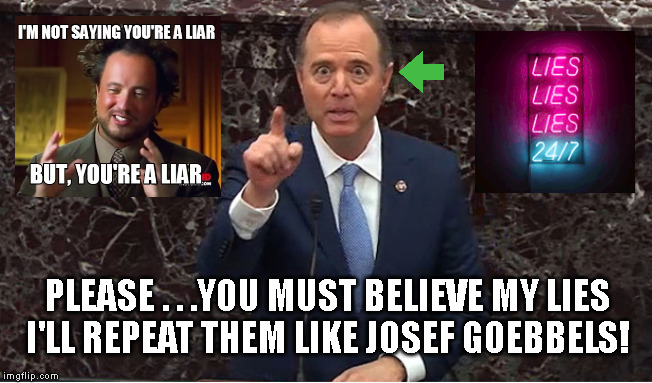 Somebody needs to sell Schiff a Weasel Farm.

He could be convinced how much money he’d make selling them for Weasel coat pelts.

“Unless someone took in contraband, there isn’t video of this. The feed had to stay in one place at all times, or so I’ve heard it reported. There’s not supposed to be video of the Senators or the gallery.”

If that’s the case, how are there pictures of Bernie napping, the bimbo next to him doing a crossword puzzle, a video of dianne frankenswine and other demsheviks leaving the chamber, etc?