This is all so disgusting and surreal.

It angers me to NO FREAKIN END!! The bitch from hell plastic Pelosi along with hitlery are laughing all the way to their rest chambers!!! Bill Clinton’s revenge as well! BURN IT DOWN!!! How come our team isn’t counter protesting the trash that are right now in the capital rotunda! Why do they always get first billing?!! Any Trump supporters in DC willing to also make a stink of support for our president alongside those bastards! Good gosh folks this is the time to fight back!

Nancy and the lawfare lawyers are very shrewd ...they are playing the game to win!! The optics here are very disheartening! Plastic evil Pelosi needs to burn to the stake!! It’s all about optics now and this looks very legit and incriminating! Pray for our president..his nerves must be frayed by now!! They have gained they campaign slogan they being diabolically seeking after all the hit and misses they’ve had....optics my friends optics!! 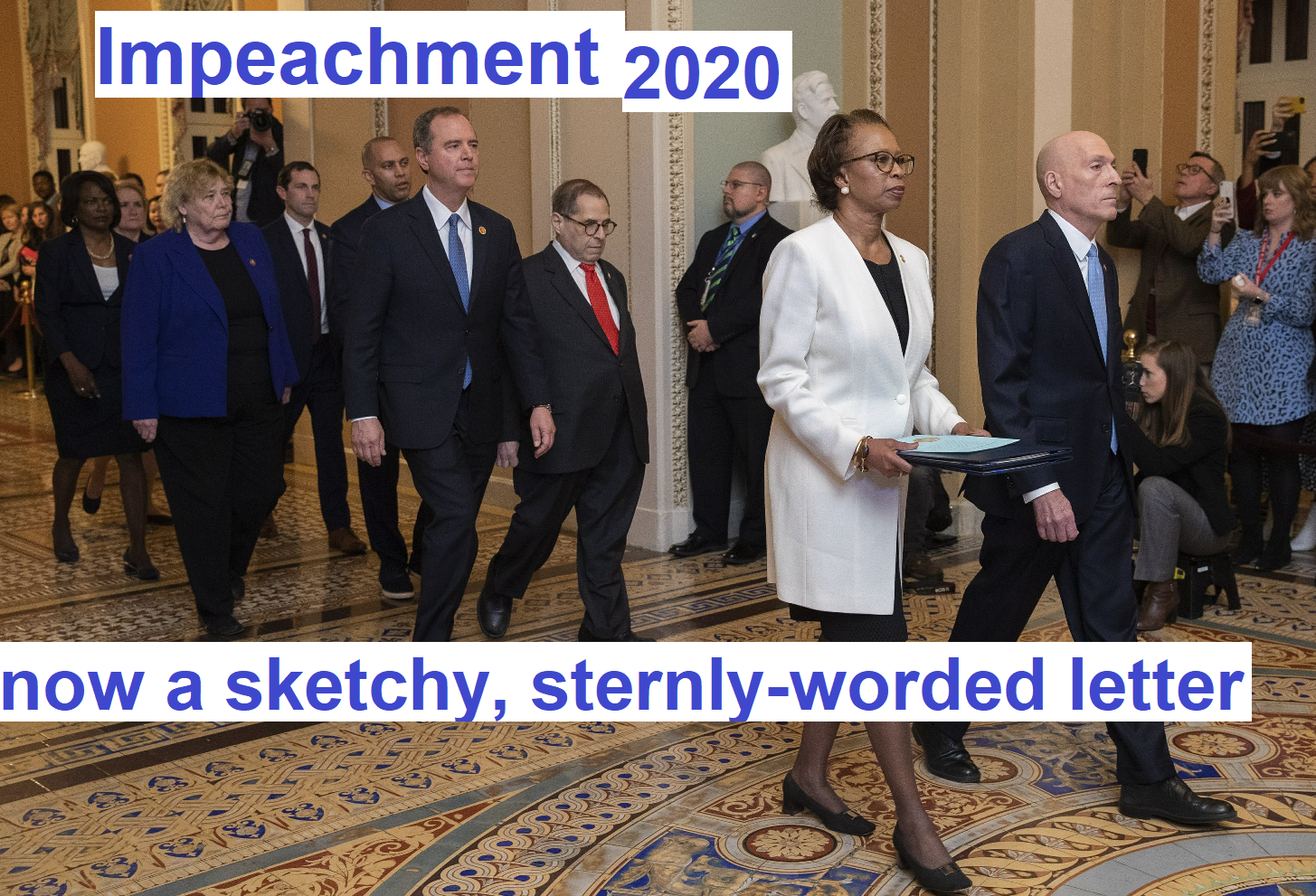 Roberts should not be presiding over this case. He created appointed the FISA court judges which are in question.

I think Roberts would love nothing more than to screw over Trump and get him removed. Roberts would rather go back to the days of ignoring the Constitution and just rubber stamp whatever comes out of a DEM or RINO White House.

67 posted on 01/16/2020 1:01:39 PM PST by CatOwner
[ Post Reply | Private Reply | To 37 | View Replies]
To: RummyChick
Those of us who predicted an impeachment and trial over a year ago get to say "I told you so!". How anyone on this forum could have believed otherwise truly baffled me.

Worse case scenario is the Senate (and Roberts) somehow remove Trump, and conservatives sit on their hands after it is done. No march on DC.

This is the process set up in our government. Much like a jury in our civil/criminal courts.
This is our government process and it needs to work itseld out. If the President
is cleared and hasn’t borken the laws then he will be cleared.
******

Impeachment in the United States is the process by which a legislature
(usually in the form of the lower house) brings charges against a
civil officer of government for crimes alleged to have been committed,
analogous to the bringing of an indictment by a grand jury.

Most impeachments have concerned alleged crimes committed while in office,
though there have been a few cases in which officials have been impeached
and subsequently convicted for crimes committed prior to taking office.
The impeached official remains in office until a trial is held. That trial,
and removal from office if convicted, is separate from the act of impeachment itself.

In impeachment proceedings, the defendant does not risk forfeiture of life,
liberty, or property. According to the Constitution, the only penalties allowed
to be imposed by the Senate are removal from office and disqualification from
holding any federal office in the future.

Roberts is certainly a NeverTrumper Judge.

There was a time, and not that long ago, that it would have triggered just that. Those were the days when there were Americans who really gave a shit about their country and not about being on the “me” line.

I did not say senators I said Roberts. To keep him from communicating with Democrats. Like a judge would be outta bounds to huddle with prosecutors offline to plan strategy against the Defence team. Which I do not put past these criminals

I agree. I always thought it was going to go to a trial, with the rules dictated by the Dems, and I suspect they probably will remove Trump. For one thing, Pelosi wants to be president (she’ll be able to get rid of Pence quickly enough, one way or another).

And you’re right, nobody is going to do anything, including our big talkers and keyboard kommandos. It’s a coup and we’re powerless to stop it.

The house has already called a couple dozen witness while Trump has had none. Add to that, Trump’s lawyers were not allowed to participate. That means they have had no time to investigate anything. This thing is very unfair and un-American,

It was sickening to hear Graham on Hannity yesterday breezily validate the House Stalinist show trial by saying impeachment was a “record created in the House.”

Traitor skunk! And the other Obama skunk fixing FISA, WTF is going on here?

I know, it’s just too bad he turned out so bad.

I know but i believe that this will turn out OK because the Watchmen have things in hand.

“Frankly it would not surprise me if he is removed from office at this point go ahead flame away..”

Not even Mitt Romney will vote to remove, and he hates the President’s guts.

A few anti-Trump Republicans will vote the wrong way on procedural votes such as those relating to the calling of witnesses. That way, they can lash out harmlessly at President Trump in the name of “truth and fairness”.

Voting to remove is a whole different story. It would be a career ender.

If a Republican Senator were to vote to remove a Republican President in an impeachment that everyone knows is politically motivated, that Senator would never get another Republican vote. He or she would literally need to switch parties.

79 posted on 01/16/2020 7:50:14 PM PST by enumerated
[ Post Reply | Private Reply | To 35 | View Replies]
To: CatOwner
"Those of us who predicted an impeachment and trial over a year ago get to say "I told you so!". How anyone on this forum could have believed otherwise truly baffled me. Worse case scenario is the Senate (and Roberts) somehow remove Trump, and conservatives sit on their hands after it is done. No march on DC."

Wouldn't take a large bet against your worst case scenario. If they do, then everybody needs to decide if they want to be slaves or are willing to put it all on the line.