Thanks to Trump, the Forty-Year Appeasement of Iran Is Over
American Thinker.com ^ | January 6, 2020 | E. Jeffrey Ludwig

The assassination of Iranian general Qassem Soleimani is an unusual, possibly aberrant, event. The killing of this individual leader of a sovereign state may lead to all-out war between Iran and the U.S. — or, on the other hand, the assassination may bring an end to the cycle of Iranian violence countered by U.S. and world diplomatic flatulence and appeasement.

Assassinating the leaders of terrorist organizations — i.e., non-state actors, such as Osama bin Laden and Abu Bakr al-Baghdadi — did not lead to a greater war footing against the USA because, as terrorist organization leaders, not heads of state, they are automatically considered rogue, even by sovereign state leaders sympathetic to their goals. Al-Qaeda and ISIS, despite any claims to territorial governance, are non-state actors. Thus, despite ISIS's former control of land areas, ISIS was despised for its aggressions but was not considered a serious threat to the power of leaders of other Muslim-dominant states within the region. The Middle Eastern Muslim states that may, to a certain degree, be sympathetic to ISIS's dreams of a re-established caliphate such as existed for hundreds of years nevertheless did not intend to defer to the leader of ISIS as that caliph. Despite Islam's socio-political backwardness in today's world, the glories of Islam's earlier history loom large in the consciousness of most Islamics. ISIS did not appear to Islamics as the proper heir of that presumed glorious history.

I wonder if the Ayatolla would agree - “The assassination of Iranian general Qassem Soleimani is an unusual, possibly aberrant, event. The killing of this individual leader of a sovereign state may lead to all-out war between Iran and the U.S.” - that this guy was the individual leader of Iran... 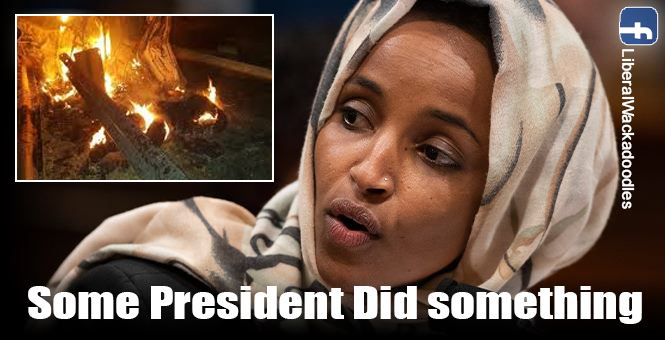 The ISSiC aka Islamic Squat Squad in Congress is really ticked off again!

We cannot wage this war in a defensive spirit. As our power and our resources are fully mobilized, we shall carry the attack against the enemy--we shall hit him and hit him again wherever and whenever we can reach him.

We must keep him far from our shores, for we intend to bring this battle to him on his own home grounds.

American armed forces must be used at any place in all the world where it seems advisable to engage the forces of the enemy. In some cases these operations will be defensive, in order to protect key positions. In other cases, these operations will be offensive, in order to strike at the common enemy, with a view to his complete encirclement and eventual total defeat.

I was on the Constellation siting in modloc off Singapore then. Our task force was waiting for orders that never came to back up the Shah.