It’s hard to say nice things about Speaker Nancy Pelosi. But, I admire her ability to play politics with everything.

Say what you want about the skullduggery she is currently engaged in with the Democrats’ impeachment process, but admit it—she is savvier than just about any GOP member of the House or Senate.

Pelosi recently stood in front of a crowd of media and gave her faux comments about how bad she felt having to go ahead with an impeachment vote and that it was about our country and the Constitution and that she prays for President Trump. Give me a break. Every observer in America knew she was full of it. It was a horrible acting job, and even Pelosi knew it. But she could care less, and that’s my point.

Pelosi understands politics is like a game of chess. She plays a very different game from the GOP when they had control of the House of Representatives, who played small ball politics like a game of checkers. Checkers can be learned and mastered by a 5-year-old. They didn’t replace Obamacare. They didn’t make the tax cuts permanent. They didn’t reform our broken immigration system or give Trump the needed money to seal the southern border and funded the government through continuing resolutions that increased spending. They ignored much-needed entitlement reform and failed to pass national conceal carry reciprocity.

Now that Pelosi is in charge, she keeps a focused strategy and is always looking several moves ahead while at the same time paying attention to what the opponent is doing. She understands chess players are cerebral; they want the opponent playing defense and reacting to them instead of the other way around.

Mitch McConnell never saw it coming that Pelosi would not forward their articles of impeachment to the Senate. Now what do they do? McConnell doesn’t know because he wasn’t ready. At some point, McConnell will learn that politics is about staying on offense. Attack, attack, attack. If you are on defense and are always responding to the other side, you are losing.

When the GOP controlled the House and the Senate, they never had Obama on defense. Obama used his power of executive order to move the ball down the field around Congress. He used it to create an unconstitutional immigration move called Deferred Action for Childhood Arrivals, or DACA. Obama even said that he didn’t have the authority to give them legal status, but he signed the order anyway. The response from the GOP was timid at best. Now, President Trump gets challenged every step of the way for simply undoing his predecessor’s executive orders, which every president has the constitutional authority to undo. The Democrats sue him at every turn to drag out the process and make it take forever, waiting for a court ruling to move forward. It has made getting the southern border wall completed nearly impossible. When Democrats don’t have the power, they still know how to be on offense. They don’t worry about whether their behavior passes the smell test. GOPers always worry about how things will look for them. Think government shutdowns. They always whine that they’ll get blamed for it even if it’s the Democrats who shut the government down.

Impeachment in the House is a hyper-partisan process. There is nothing fair about it. The House sets its own rules on moving forward with Impeachment. What’s fair is irrelevant. You may not like it, but whoever has the power, rules. When the GOP controlled the House they did not wield that power like it was a club and hammer Democrats into submission. Many on the GOP side do not have the stomach for that kind of power politics. Sadly, Republicans prefer to play that friendly game of checkers.

All the polling showed that the American people were not in favor of impeaching President Trump. Pelosi was aware of that. She didn’t care what it looked like. She catered to her base voters. Not forwarding the articles of impeachment to the Senate for a trial is denying the president his due process to defend himself. She doesn’t care about due process. She cares about doing as much damage to Trump’s presidency as she can going into the 2020 election. She’s several moves ahead of her opponents in Congress.

I don’t know if she is winning in this game. But this whole process has been a drag on the Trump administration just like during the Russia collusion Mueller investigation that went on for nearly two years. Once again, the Democrats were on offense.

But enough about Pelosi’s political prowess. Here is how you beat Pelosi and the Democrats in their game of constitutional malfeasance.

In preparation for a Senate trial, much is being made by the liberal media and Democrats about McConnell and Republicans huddling with the White House. Even a few rhino GOPers said they were disturbed upon hearing that. McConnell’s attitude should be, damn right; we are, and why not? You Democrats ran roughshod over the president with your hyper-partisan maneuver, so now it’s our turn. We’ll show you what real collusion looks like as we work with the White House to give Trump his day in court, and we don’t care if it doesn’t pass the smell test. And we will get to the bottom of Joe Biden’s bribery in Ukraine, and Adam Schiff will be called to testify. He started this crap.

Now, that would be playing chess, but they need the stomach not to hang on every hour of the news cycle, the ups and downs of the political game, and the constant worrying about how they will look. Screw that.

Be like Trump. He doesn’t live or die by the news cycle; he creates it. He doesn't give a damn what the Dems think of him. He hits back and hard. GOPers need to step away from their checkers' table and start playing to win. It’s game time.

The difference between the Dems and the Pubbies is both are hopelessly corrupt. Dems are proud of it. Pubbies are embarrassed by it.

The sheriff has it completely backwards. McConnell knows what he is doing, while Pelosi is being outmaneuvered by her own party.

it sure feels good to fight back and regain respect..
we hid in a corner long enough under bo and w.
bullies have no mercy on weakness.

They don’t know how to fight.

her party are commies trying to see how quickly they could bankrupt America and have enough left for them.

I don’t think Pelosi is nearly as savvy as Sheriff Clarke gives her credit for. She sounds and acts like someone who should be in a care home.

A Republican Assembly member says Assembly Minority Leader Brian Kolb should resign his leadership post after he crashed his state-owned SUV into a ditch and was charged with DWI on New Year’s Eve. “That he hasn’t done so already is a disgrace,”

Would any Democrat feel obligated to resign after driving drunk into a ditch?

the dem who switched parties told how she is.. ‘you vote for impeachment or you’ll never have anything here.’

thats what she is good at.

She understands chess players are cerebral; “

Pelosi is endlessly aggressive but cerebral she ain’t. Being driven by pure rage and hate is the opposite of cerebral. The idea that anybody would or should have seen her withholding the articles coming is as nuts as the idea of withholding the articles in the first place. Someone’s fighting back and the Dems are losing reason and control of themselves.

10 posted on 01/03/2020 5:09:57 AM PST by TalBlack (Damn right I'll "do something" you fat, balding son of a bitc)
[ Post Reply | Private Reply | To 1 | View Replies]
To: Kaslin
Being evil is not savvy, its it's stupid. Pelosi and her political games have completely destroyed the credibility of the Democratic party for decades to come. 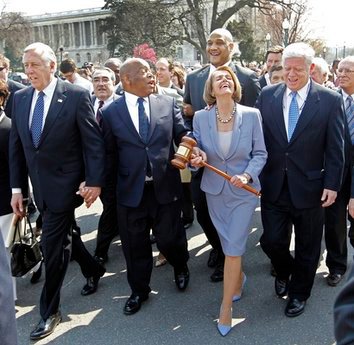 That remains to be seen.

Driving Drunk into a ditch seems to be the Democrat political strategy.

Actually, they are not embarrassed by it. They need Ds to get elected so that they can participate in the exact same corruption. McCain and Romney are every bit as corrupt as Pelosi. And more so. Pelosi will tell you flat out she doesn’t really need a reason to impeach the President. She admitted that effort began in 2016.

Cuckholds. That’s the GOP. They are so much worse than the Democrats. Northam in VA tells you to your face they are going to take your guns. See any real pushback from the GOP? Anyone on the national level who is assailing him for it?

It’s because its pretty likely when/if it all comes out that maybe one of those guns might be pointed their way.

I think you pretty much nailed it. It’s going to be copied in to my “Quotes” file.

They should always play to win. Democrats are ruthless attack dogs. Republicans have been cowering weenies. Democrats always stick together. Republicans are all over the place, not wanting to upset Democrats. Time to get a spine.

” They didn’t replace Obamacare. They didn’t make the tax cuts permanent. They didn’t reform our broken immigration system or give Trump the needed money to seal the southern border and funded the government through continuing resolutions that increased spending.

That’s because Trump hating, RINO Ryan was running the show. Put Jordan or Gaetz in that chair with a majority and watch what happens.

17 posted on 01/03/2020 5:29:57 AM PST by EQAndyBuzz (When you think about what the left is doing to America, think no further than Cloward-Piven)
[ Post Reply | Private Reply | To 1 | View Replies]
To: Kaslin
They didn’t replace Obamacare. They didn’t make the tax cuts permanent. They didn’t reform our broken immigration system or give Trump the needed money to seal the southern border and funded the government through continuing resolutions that increased spending. They ignored much-needed entitlement reform and failed to pass national conceal carry reciprocity.

GOP leadership didn't want to do any of those things. They just wanted Trump to go away so they wouldn't be forced to take a position on any of these "radical Right issues" that might hurt their standing on the DC party circuit.

the difference is the GOPe fight like little girls- always have since Reagan left office and a small portion of time when Newt was in DC...

The GOP is hopeless...

If Trump wins in 2020 he needs to change the name of the party..