You can’t accept a thing of value from a foreign power, much less extort it by illegally withholding aid. Trump did a bad, and Mulvaney said as much, and it’s described clearly in the July 25 call transcript. There’s no need to impeach the guy over it, but it’s not nothing.

21 posted on 12/22/2019 5:39:24 AM PST by babble-on
[ Post Reply | Private Reply | To 18 | View Replies]
To: babble-on
The 2019 Federal fiscal year ended on September 30th. The government has been operating under a temporary 3-month spending bill that was being negotiated while all this nonsense was going on in September.

If you’re going to come on this site and attack President Trump, you ought to at least have a basic grasp of facts.

How much was this “thing of value” worth?

23 posted on 12/22/2019 5:45:16 AM PST by Alberta's Child (In the time of chimpanzees I was a monkey.)
[ Post Reply | Private Reply | To 21 | View Replies]
To: All
THE SALIVATING HILLARY GOT TO THE UKRAINE GOLDMINE FIRST
<><> Ukaraine oligarch Pinchuk donated from $10-25 million to the Clinton Foundation between 1994-2005.
<><> Pinchuk hired Clinton pollster Doug Schoen @$40,000 per month in 2000. In 2004, Schoen introduced Pinchuk to Hillary.
<><> Schoen set-up nearly a dozen meetings between Pinchuk and senior State Dept officials between Sept 2011 and Nov 2012.
<><> FOIA Emails show billionaire oligarch Pinchuk invited to dine at Secy of State Hillary's home despite denials they met.

THEN-PRES BILL CLINTON GREASED THE SKIDS Ukraine entered into the "Treaty Between the United States of America and Ukraine on Mutual Legal Assistance in Criminal Matters," negotiated by then-President William Clinton and ratified by the U.S. Senate in 2000. The US chief law enforcement officer requested that Ukraine assist our AG in investigating possible criminal activity in 2014 through 2016. Pres Trump is being impeached for following US law initiated by then-Pres Clinton. Perhaps the Clintons do not want their activities with Ukraine exposed?

<><> A 2015 WSJ report includes a chart of “foreign donors” to the Clinton Foundation showing “Ukraine” as a top donor among a list of large donors including “foreign individuals and their foundations and companies" while Clinton was secretary of state from Jan. 21, 2009 to Feb. 1, 2013. 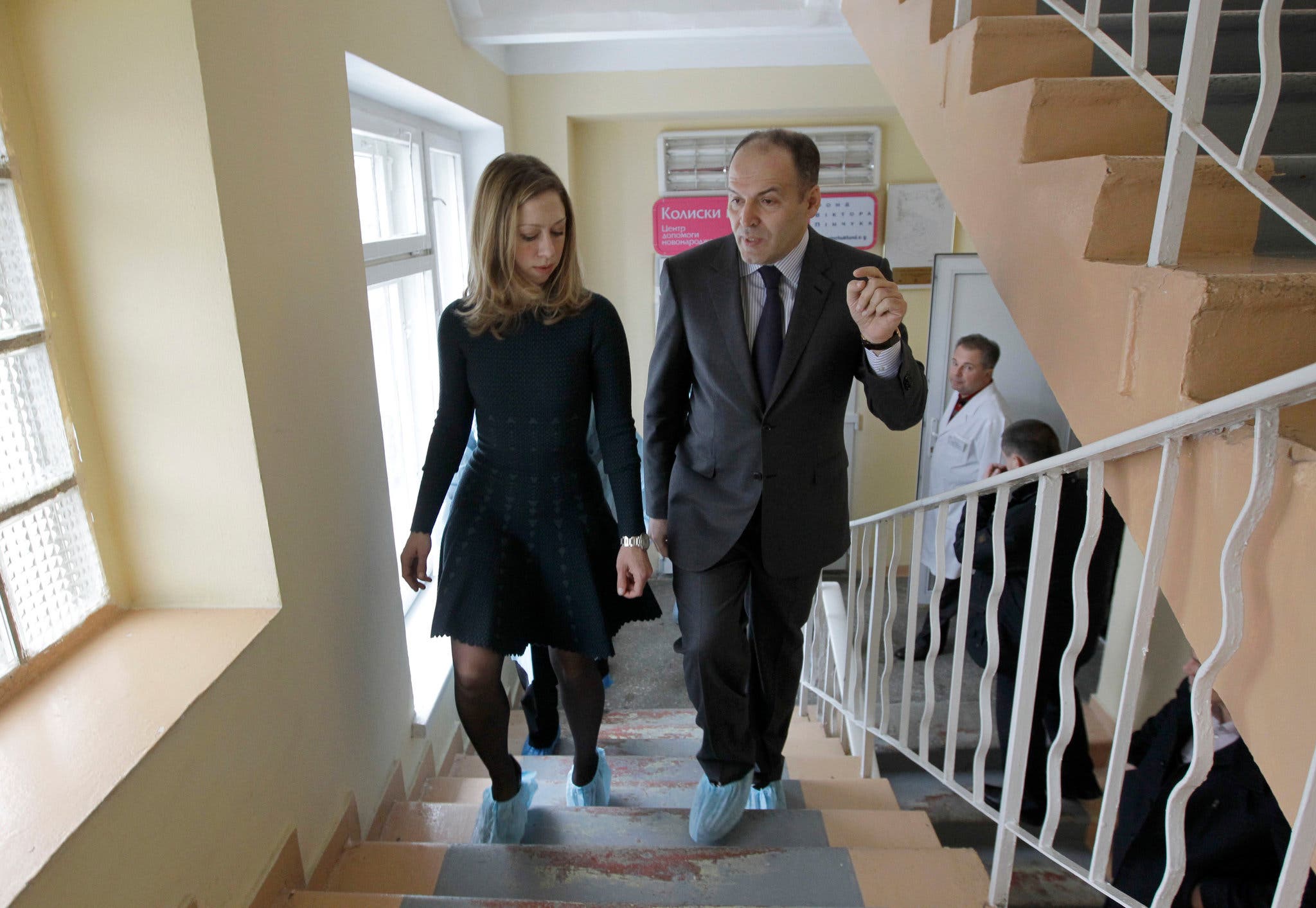 <><> The Clinton Foundation publicly reports, and its foundation spokesman confirmed, that other foreign entities have given more than the Pinchuk Foundation (which is listed as having given between $10 million and $25 million).

<><> Between 2009 and 2013, including when Mrs. Clinton was secretary of state, the Clinton Foundation received at least $8.6 million from the Victor Pinchuk Foundation based in Kiev, Ukraine, the Journal reported.

<><> In 2008, “Mr. Pinchuk made a five-year, $29 million commitment to the Clinton Global Initiative (a wing of the foundation that coordinates charitable projects) "to train future Ukrainian leaders and professionals to modernize Ukraine," according to the Clinton Foundation. <><> Several alumni of the Clinton program are current members of the Ukrainian Parliament.

<><> Ukranian Pinchuk was especially generous---not only blanketing the Clinton Foundation with money, he hired Hillary for a $300,00 speech to help him boost Ukraine's creds; even Chelsea got into the act. 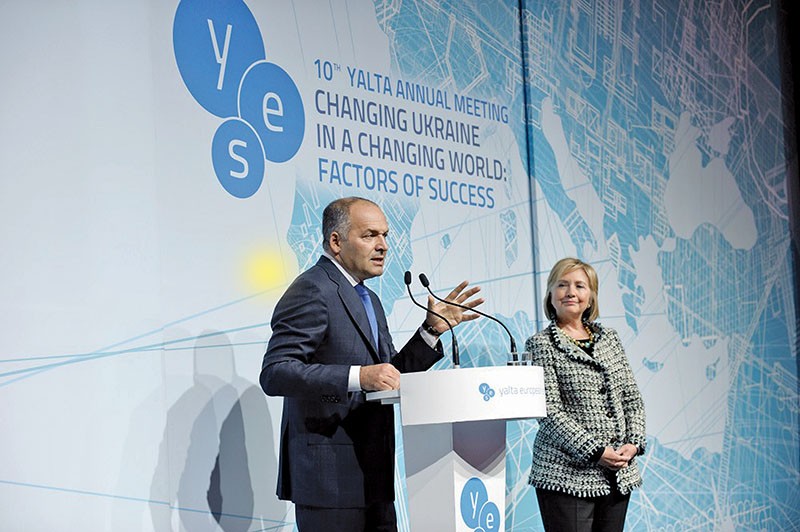 CIRCA 2013----Ukranian billionaire Viktor Pinchuk hires Hillary to give a speech at a Ukraine forum discussing regime change, exiting Russia....and hitting up the US for more foreign aid.

What wording in the July 25 transcript clearly described a benefit to Trump’s campaign in order to trigger a violation of that statute?

You can't ignore Biden's corruption. You can't preclude investigating only because a suspect is a political rival.

Well, if there were one single other instance of Trump investigating foreign corruption that might have a bit more credibility. But alas, the only instance that seemed to bother him was the one involving the Dem front-runner.

“Much less extort it by withholding aid”

Is it too late to impeach FDR?

A note from your link Reads:

“Factual & Legal Analysis at 13-20, MUR 6414 (Carnahan) (July 10, 2012) (explaining that a committee’s receipt of investigative or opposition research services without paying the usual or normal charge may result in an in-kind contribution).”

When did Trump’s campaign committee receive such research? When did Trump solicit such research on behalf of his campaign committee? What other actions normally considered part of his duties is a president not allowed to do because it might benefit his re-election? Is it illegal for a president to lobby a foreign power to lower tariffs because that might improve the economy during his term? Would it be collusion if the foreign power did so?

You can’t be serious. The statute I posted related to ELECTIONS, not to wartime alliances. That’s the sort of disingenuous nonsense that really does bug me. I have seen you on here for years, and I know you’re not that stupid.

babble-on, must be a highly, HIGHLY principled person.

But, as my neighbor says, as she screws up her face,...”he uses curse words.”

I LOVE HIM. AND HE DID NOTHING WRONG IF HE HESITATED IN GIVING OUR TAX FUNDS TO A NOTORIOUSLY CORRUPT COUNTRY.
But, I don’t think he even did that.

So what,it’s common,nothing to see here,it would be irresponsible for the President to send billions of dollars to a corrupt country without making sure it would not be responsible for the money.
Biden and the Democrats were using Ukraine as a cash machine

“That’s not what I said. That’s what people said that I said,” Mulvaney said. “Can I see how people took that the wrong way? Absolutely. But I never said there was a quid pro quo, because there isn’t.”

Well, as I have been saying for weeks, this is a coordinated, scripted plan worked out months ago by the President’s enemies, including some Senate Republicans. It is meant to generally follow the Watergate plot map, but of course they have much less to work with.

The two key elements are: First, imply and act as if it’s true that “quid pro quo” in foreign relations is a crime or a wrong act, when it is neither. Bait Trump with the lie and get him to deny the obvious.

Second, assemble “witnesses” who will testify to the quid pro quo, but do not let them appear before the House committees, which would allow weeks for their seemingly convincing but obviously absurd conclusions to be debunked. Instead, withhold their testimony until a Senate trial, where at first they will not be allowed to appear but after an impassioned floor fight and a constant media barrage, four “courageous” Republicans will “stand for the truth” and allow the testimony, (hopefully) triggering a landslide of weak Republicans, who want Trump gone anyway and who, pushed by their “donors” and craving the adulation of the media will remove the President in an afternoon of insanity.

That’s the plan. I hope it fails.

But I wish Trump had followed my advice and mounted a “You’re goddam right I ordered the Code Red” defense from the beginning. The enemies of our nation and our President are going to “prove” that he ordered a quid pro quo to get evidence against Biden, as it was his perfect right, indeed as it was his job to do, and his unfortunate denial may get him removed yet.

“not to wartime alliances”

In 1940, when the US sent destroyers to the UK, the US was legally neutral and the UK was a belligerent power.

The US and the UK were not allies at war together.

“Ten minutes of Hate” to keep the ‘Progressives’ focused.

All of this horror show amounts in reality to no more significant Constitutionally than fights and charges over what the President had for Breakfast on a Tuesday or whether or not he was offered a mulligan on his own golf course.

Just because Biden is now a political opponent does not make him immune from investigation for possible wrong doing while VP. The Democrat party has reckless lied to the US People during this whole impeachment scam. The President has both a legal and a moral obligation to have this investigated. Their “Abuse of power” and “Obstruction of Congress” accusations are absurd lies with not a hint of shred of a clue of either legal, or moral, legitimacy.

All of this hooha is useful as much of the rest of the DemocratMSM handwringing and wailing has been to take the attention off what is being accomplished. It is all good.